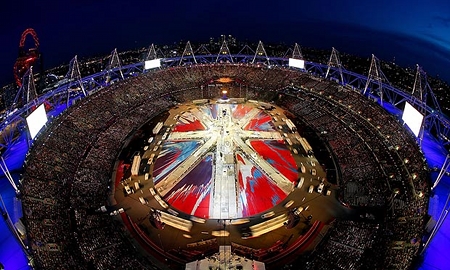 You know something’s up when the BBC’s usually reliably anodyne Hazel Irvine is giddily deploying the phrase “musical mash-up”.

The Closing Ceremony of the Olympic Games – curated by Kim Gavin, as opposed to Danny Boyle this time – was everything w e thought the Opening Ceremony was going to be: chaotic, ill-thought-through, rather embarrassing. But it wasn’t valueless: for the last two weeks Britain has been a bubble of positivity, optimism and good-will, and the Closing Ceremony helped restore the cynicism and self-loathing which oils the wheels of everyday life here in Blighty.

Below, we offer our impressions of the performances heard and seen as part of the ceremony, recordings of which are naturally being hawked on iTunes as we speak, in the shape of a compilation called A Symphony of British Music. The message couldn’t be clearer: the party’s over, get back to work. 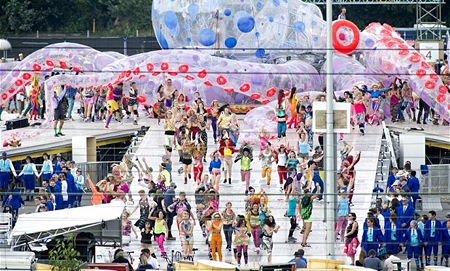 Having delivered a rousing performance of ‘Our House’ for the Queen’s Diamond Jubilee concert a few months back, Madness were called upon to deliver, er, exactly the same thing for the Olympics Closing Ceremony. It didn’t quite come together so well this time – Suggs sounded hoarse as hell, and it’s telling that the version featured on the iTunes album is “re-recorded”.

There are a handful of living popstars (and a couple of dead ones too) who were respected enough, or lucky enough, to have it both ways: they got to have their music played at the ceremony without having to suffer the indignity, or indeed the logistical headache, of actually performing it themselves. Bush and Bowie got the straight playback treatment, while Blur’s ‘Parklife’ was given a right royal seeing to by the Massed Bands of The Household Division. 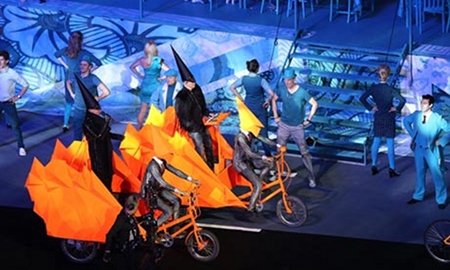 Neil and Chris did a manful job of sounding withering and laconic even as they were being sped around the stadium on rather unstable looking rickshaws and wearing three foot high Gareth Pugh-designed dunce caps. Respect where it’s due.

Poor old Ray, it must be tiring being constantly wheeled out to buttress the nation’s sentimentality with song. And by god did he look tired. He really ought to have been sat in an armchair sipping a sherry and watching the ceremony on telly, not performing in it himself. As far as Waterloo Sunsets go, this was a cloudy, profoundly half-arsed one. 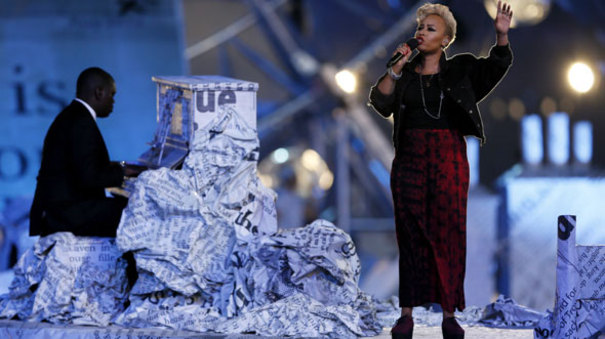 Emeli Sandé – ‘Read All About It’

Nothing against Emeli Sande, but one can’t help but feel she’s been over-represented at the 2012 Olympics. Having sung ‘Abide With Me’ at the Opening Ceremony, last night she delivered her version of Professor Green’s ‘Read All About It’ in two separate, depressingly long parts.

We’re not normally ones to resist the opportunity to put down Elbow, but the mawkish orchestral swell of ‘One Day Like This’ was, we must concede, perfectly suited to the occasion. Still not sure about ‘Open Arms’.

Having jolted the stadium awake with a manic, nay maniacal version of ‘Freedom’, George proceeded to commit an act of bewildering, unforgivable self-indulgence: he performed a new and rather dreadful song. 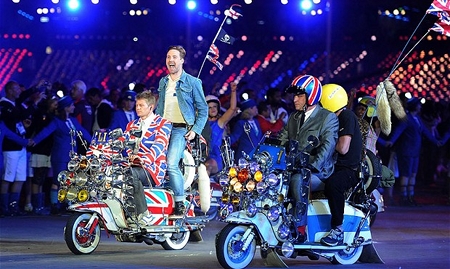 Guess Kaiser Chiefs haven’t been allowed to perform ‘I Predict A Riot’ at establishment events in London ever since Summer 2011, but that still doesn’t explain why on earth they played ‘Pinball Wizard’ instead. But back up, back up: why on earth were the Kaisers playing at all? Do they still sell records?

Even if like us you feel generally quite warm towards Annie Lennox, you will have been utterly perplexed as to why she performed the theme song from Francis Ford Coppola’s Bram Stoker’s Dracula instead of, you know, something good. 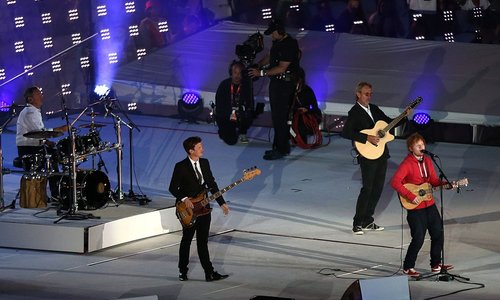 In the absence of the real Pink Floyd, the bard of bum-fluff Ed Sheeran sang a lumpen ‘Wish You Were Here’, backed up by The Feeling’s Richard Jones, ex-Genesis journeyman Mike Rutherford and the one Floyd member most members of the public couldn’t recognise to save their life, Nick Mason.

Russell Brand – ‘Pure Imagination’, ‘I Am The Walrus’

Russell’s clowning mime of ‘I Am The Walrus’ was surprisingly affable. That said, The Darkness’s Justin Hawkins would’ve been a better shout, and most punters wouldn’t have been able to tell the difference between them. 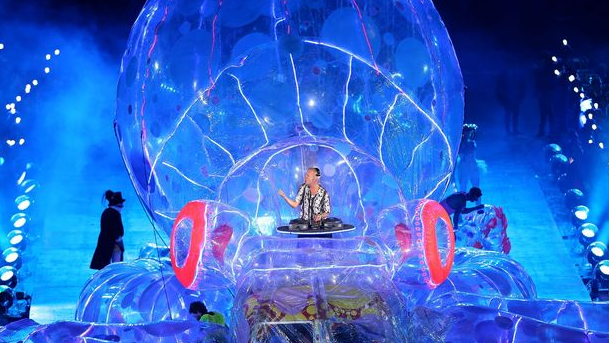 The creative low-point of British dance music revisited by some pillock from Bromley who used to be in the Housemartins. At least he looked like he was enjoying himself, and the giant octopus was a winner.

Crap, but at least it probably made some under-16s happy, especially given that the rest of the ceremony seemed squarely targeted at people who came of age in the self-congratulatory Britpop ’90s.

Liam Gallagher must’ve sung ‘Wonderwall’ what, 3000 times in his life, if not more? And still he struggles to sing it in tune. It would’ve actually been preferable to hear him sing one of his own songs – ‘Songbird’, perhaps – as opposed to butchering one of Noel’s in such prideless, dead-eyed and dutiful (to the tax man) fashion. 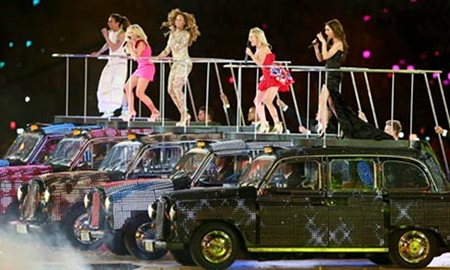 The anticlimax of the decade. It was always going to be underwhelming musically, of course, but we didn’t expect it to be so underwhelming as a spectacle. That said, the Spice Girls must be the only group in history who look better now than they did 15 years ago.

Eric Idle – ‘Always Look on the Bright Side of Life’

Unfuckwithable, to be honest.

Queen and Jessie J – ‘We Will Rock You’

We didn’t really hear this properly – the visual distraction of Brian May’s monstrous grey perm and Jessie J’s surgical sock outfit was just too much. 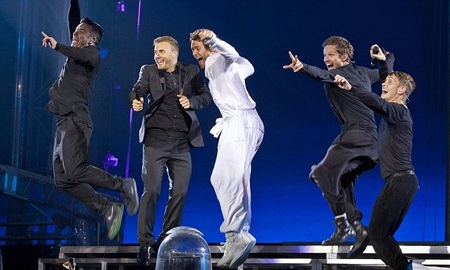 Take That – ‘Rule the World’

Gary Barlow has to be the safest pair of hands in British establishment music. A mere week after undergoing immense personal tragedy, he’s here at the Olympic Stadium, leading his lads in a teary, triumphant and ever so slightly imperialist reading of ‘Rule The World’.

Most people would probably prefer to see Hugh Laurie doing his House keyboard mime of ‘Baba O’Riley’ than hear Roger Daltrey sing it live. But when the best representation of “our generation” that the Closing Cermony organisers could rustle up were Jessie J, Emeli Sande and Muse, it was hard not to feel nostalgic for the one of which The Who are part. When all the dinosaurs die, will Britain still be able to legitimately call itself the greatest pop nation on Earth?