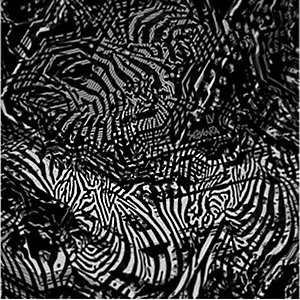 It’s not LV’s first foray into African timbres; the trio’s 2010 single ‘Boomslang’ made for immediate and pervasive club weaponry, fusing clattering percussion and South African MC Okmalumkoolkat’s mantric chanting into a pleasing example of electronic music’s ability to remain amorphous. Again on ‘Sebenza’, this album’s lead single and title track, Okmalumkoolkat’s dry, hypnotic vocals are coupled with LV’s ragged, driving rhythms, making for predictably infectious listening. Fans of ‘Boomslang’ won’t be left wanting, ‘Sebenza’ is that track’s natural successor, led by a hook (“Se-Se-Benza / Only rest in December”) every inch as contagious as that of its predecessor.

Okmalumkoolkat is one of three South African MC’s that make appearances on Sebenza, and between him, Ruffest and Spoek Mathambo, there’s a very interesting set of vocal turns throughout. The vast majority of these turns are welcome for their energy and their exhuberence (‘Safe and Sound’, ‘Nothing Like’), but some are eyebrow-raising (the auto-tuned paean to blogging on ‘International Pantsula’, for instance). What becomes most apparent is how much presence these vocals have, clamouring and hustling for your attention in a way that Joshua Idehen never really struggled with – or needed to – on Routes. Occasionally their presence can be suffocating: LV’s instrumentals are, particularly on the album’s second hand, stunning, and could do with some more space to shine.

When Sebenza is good, it’s essential, but when it stumbles it can be bewildering. ‘Primus Stove’ is one such oddity; a curious interlude lynchpinned by a guttural, belching bassline and lift-lobby drums. It’s not terrible by any means. but seems out of place. Sebenza works best when gunning for full-tilt vibrancy, and album highlight ‘Nothing Like’ showcases just how much potential this intercontinental culture clash really has, thunderous drums driving a colourful synth lead, whilst South Africa’s Ruffest intones, cocksure, correctly: “There’s nothing like us”.

As one would expect from LV and Hyperdub, Sebenza is by no means the most conventional record you’ll hear this year, and certainly confirms LV as an act keen to push their sound to fascinating new locales. The fusion doesn’t always entirely hit the mark – ‘Spitting Cobra’ for example, is a slightly directionless stream-of-conciousness speech set to wonky synths – but when the group’s rhythms and vocalists’ flows are on the same page, there’s little stopping them. Convention has never been the watchword for this particular trio, and with a sound so curious, uncompromising and unashamedly fun, Sebenza demonstrates yet again that LV are an act as admirable as they are on, on their day, masterful.