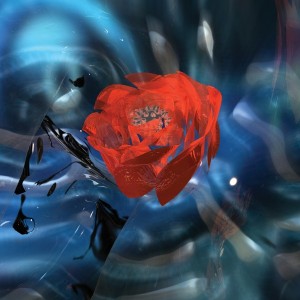 Since 2010’s much-lauded 7AM, lots has changed for the duo of Logan Takahashi and Nick Weiss. Well, one thing mainly: since graduating from the university where they met (Oberlin, Ohio), the pair are now doing this music schtick full-time. The landscape around them has change too, DIY house hybrids now being de rigeur for the US underground and elsewhere, making the Teengirl Fantasy commixture of hands-in-the-air house tropes, homespun synth impressionism and a skewed chart-pop sensibility less of an original proposition. Tracer is, to the duo’s credit, a markedly different beast to its predecessor: cleaner, crisper and more outward-focussed. At points it’s almost a pop record.

Still, the basic language that underpins these 10 tracks is undeniably theirs. A title like ‘Vector Spray’ captures it neatly: like the froth whipped up on the crest of a wave, hooks and melodies don’t appear fully formed so much as tumble erratically in and out of being in a manner poised between the geometric and the organic. Rhythms, similarly, don’t often seem intended to propel, so much as simply describe a shape: driving moments – four-four kickdrums, say, of which there are a fair few – tend to be fleeting, just another texture to be deployed rather than a backbone to the whole thing.

When it works – generally in the album’s softer moments – it’s a bewitching proposition. ‘Orbit’, far from a dramatic opening statement, sees a series of synth motifs bob and weave around each other with a furtive sense of grace; ‘End’, meanwhile, is a beautifully pensive piano-led episode, leaning heavily on a harmonic palette lifted from 80s ballad-pop (no bad thing in this writer’s eyes). ‘Eternal’’s harder percussion is offset by wafts of dreamy synth, making for an unstable house music construct not unlike Hieroglyphic Being with all the rough edges thoroughly buffed and polished.

The problem with this technique, though, for all its subtle originality, is that there’s a fine line between crafting strange, fractal contours of intensity, and creating something maddeningly aimless – between pulling off something genuinely smart and getting hopelessly wrapped up in a welter of pedantic detail. Many of these tracks hover dangerously on the threshold between the two, and often their convoluted structures can become a source of frustration – or an incentive to disengage and simply let the agreeable but (at a glance) homogenous surface of the thing wash over you. As such, there’s plenty here – ‘Inca’, with its gaseous Detroit pads; ‘Timeline’, in spite of a tantalisingly brief acid house moment – that will struggle to leave much of an impression.

Central to Teengirl Fantasy’s progression from 7AM to now is their full embrace of live, rather than sampled, vocals – and a handful of vocal guest spots here might serve as waymarkers for the rudderless listener. The brief but turgid ‘Pyjama’ sees Panda Bear’s vocal warped and squeezed with odd pitchshift effects, but ultimately Noah Lennox’s penchant for hazy psychedelia doesn’t sit all that comfortably in Teengirl’s crisp soundworld. Laurel Halo’s ‘Mist Of Time’ is better: a gorgeously light slow jam where Halo’s vocal, smooth and wreathed in a cool vapour rather than dry and piercing as on her recent LP, makes for unexpectedly pleasurable listening. That the duo managed to bring sometime Daft Punk collaborator Romanthony on board is obviously a major coup – Takahashi and Weiss breaking the fourth wall of the RnB-adoring underground – but the resultant pop-house stormer, ‘Do It’, doesn’t feel all that convincing, its typically fiddly synth hook perhaps a mismatch for the singer’s broad-brushstroke melodics.

The real killer – and the album’s undisputed highlight – is ‘EFX’ featuring Kelela. It’s certainly the closest thing to a chart hit here, with the singer’s vocal dry, clean and pushed to the forefront, behind which stilted synth and percussive gestures spar for dominance. And somehow, just as the now-familiar confusion/stasis starts to set in, the whole thing stumbles into an anthemic chorus with precisely the kind of directness and emotional heft Tracer so often lacks. This is, finally, a proper pop song – it’s got a middle 8 and everything – but the way all of its elements drape themselves over the form is strikingly original. When Teengirl are on form, their music is a heady thing: house music sent delirious on a glut of ideas, or pop working to some half-known criteria. It’s an unstable edifice, though, and too often the results fall flat.