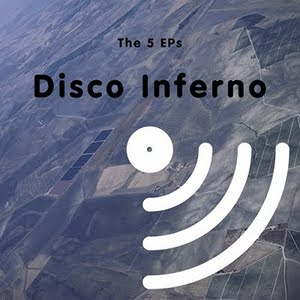 Available on: One Little Indian 2xLP

What if you invented the future and nobody heard?

Disco Inferno began life as a four-piece intertwined with fellow Essex experimentalists Bark Psychosis, but quickly stripped to a trio (when Daniel Gish permanently joined the latter) with Ian Crause on guitar and vocals, Paul Wilmott on bass and Rob Whatley on drums. In the band’s early years from 1989 to 1992, collected on the sublime In Debt compilation, they built a sparsely beautiful amalgamation of Joy Division and Durutti Column and dragged it somewhere uniquely odd despite their heart-on-sleeves influences; ‘Émigré’ and ‘Hope To God’ two astonishing examples of their already idiosyncratic tendencies. Wilmott and Whatley’s undersung and fluid rhythm section echoed the dark architecture of their Mancunian forebears and Crause delivered lyrics that were startlingly bitter, afraid, angry and astute in a voice that beggars belief for one so young.

These early forays though, masked a ferocious ambition at the heart of the trio whose hearts and minds had been stolen by a twin-pronged assault from Public Enemy and Young Gods. In the early throes of the 1990s Disco Inferno threw what meager cash they had at electronic developments, Crause and Whatley attaching their respective guitar and drums to midi and sampling technology (with no money left, Wilmott remained with a standard bass set-up) but hanging onto their vital desire to remain a live band. The result: the sudden ability to literally play samples live with each individual guitar string or drum pad triggering a different sound. Imagine the possibilities… Well Disco Inferno did and digital blah blah aside, what they then went on to do next was to create some of the most remarkable records you will ever hear.

The three year period captured by this vinyl reissue of last year’s gloriously welcome CD compilation covers the 5 EP’s when DI shifted into this fuck knows what – a speeding futurist headlong collapse into sampled noise and subtle melodic power which at its most chaotic is almost Dadaist in its redeployment of found sound as mnemonic hook. DI matter because, despite a surprisingly large amount of diverse array of brilliantly exploratory indie bands at the time, they were the only pop / rock band to capture the desperately chaotic speed of life that was being exacerbated by the onslaught of digital communication and never-ending and relentlessly accelerating social collapse. This was when jungle was in its ascendancy and, as impossible as it was to separate My Bloody Valentine from E-culture, so it was with DI and the extremities of the chaotic madness of breakbeat that had been seen rave culture spill onto the streets in unprecedented waves, only to be beaten back post-Castlemorton.

In fact, the period here covered here is bookended by Castlemorton and the release of Goldie’s Timeless album, arguably the point at which the junglist mission dissipated back into the restrictive rigid structures of drum’n’bass. For a short period of time an incredible futurist drive seemed to erupt across the underground like no other – an escape velocity that despite the appalling state of the times promised something and Disco Inferno are at the heart of this molten core of experimentation and boundary smashing. But it’s not just the music which would be enough in anybody’s hands. Crause’s lyrics are so shattering, staggering, despondent, angry and just occasionally joyful – an incredible conflation of the personal and the political beyond the reach of anybody that decade other than maybe Jarvis Cocker. This is non-manifesto politics, free of tub-thumping and utterly bewildered by their own times but there can be no denying that – and you miss the point if you don’t get this – Disco Inferno are a political band. Accelerated collapse – not a single word of it sounds dated 20 years later.

5 EPs then – Summer’s Last Sound from 1992, A Rock To Cling To and The Last Dance, both 1993, and from 1994, Second Language and It’s A Kid’s World. The first and last track titles collected here alone, ‘Summer’s Last Sound’ and ‘Lost in Fog’,  reveal the band’s uniquely deep strand of fatalism. The EP can be a zone of experimentation, especially with the financial implications of preparing and recording an album but over the course of such a short space of time what unfurls here is not just a development in sound from EP to EP but from song to song.

‘Summer’s Last Sound’ ushers in this brave new age – doleful bass line and a chorus of bird song that suddenly takes sequenced flight as shards of electronics and strange sampled textures whirl around your head until Ian Crause decides it’s time to tell us a little about the world: “The gulls are coming in off the coast / The smell of corpses pulls them in / Mass graves uncovered, must be abroad, it can’t be here / I can sense raw violence, but I still don’t understand / How when the past looks dead and you’ve got the future / In the palm of your hand”. Words provoking samples, samples prompting words – the terror and absurdity of the world suddenly rendered so real that it almost makes you laugh. This devastating and shocking redefinition of Disco Inferno’s sound was backed with ‘Love Stepping Out’, a city night in bitter and complete disarray, “Baby just don’t stray too far / you’re helpless on your own / these people want to change things / they’re dangerous to know / they’ll fill your tiny head with rubbish / take you clean away from me / there’s not much that I own / but I like to think that I own you”. Terrible things unfold over music that is almost serenely beautiful and heart-breaking, Crause drenched in reverb and singing from a thousand miles away exhibiting a deep troubling weariness. The music is devastating – bursts of church bells and crowd noise, carousel-like (Disco Inferno definitely have a feel of the carnivalesque, no matter how psychotic they might render it) music box melody, fluttering shadows and somehow so… still. Hell is calm, resigned, almost accepted.

‘From the Devil to the Deep Blue Sea’, from A Rock To Cling To, the first of Disco Inferno’s EPs to be issued on Rough Trade, is an instrumental just short of 10 minutes and might be the strangest piece they ever wrote, a live soundscape that charts a narrative set out exactly in the title. Loops of breaking glass, burning fuel lines of noise, screaming steam whistles and Wilmott’s insistent repetitive bass break your head until the latter slows the rhythm down and you’re suddenly plunged into the strangest, edgiest exotica you’ll ever hear; underwater bird song and un-human noises. Your ears are wide-eyed but there’s something incredibly unsettling about the whole thing, the sound of – to paraphrase a forthcoming track from their next album – even the sea turning against us.

The Last Dance features two (unnecessarily) similar versions of the title song that find the band working in unexpectedly melodic and relatively sample-free New Order-ish territory – sonically, at least. These were offset by two other songs, one of which revealed exactly what was to be waiting on Disco Inferno’s forthcoming album and, to my ears, the most important album of the 1990’s. D.I. Go Pop is absolute fucking bedlam, apparently built off a My Bloody Valentine sample that was triggered across Crause’s fret-board. It sounds like every sound in the world falling out of the sky and shot out of a speed-addled machine gun. Crause’s breathless narration describes the band lost and beaten-down in an unknown foreign Interzone (“what kind of a place is this / that nobody cares”) culminating in an amazing lyrical pay-off line that I’m not going to spoil for you. This is like a hyper-compressed, furious and deadly serious Butthole Surfers circa Locust Abortion Technician and still prompts one of my fondest memories of what were truly horrible times in my life, when a bewildered house mate stormed into my room yelling “WHY THE FUCK ARE YOU LISTENING TO THREE SONGS AT ONCE!”

So... after the overload of D.I. Go Pop, Crause jumped back to straight guitars (the Rickenbacker and, it seems, a strong love of The Byrds) and the group issued the Second Language EP. Bouyant with an obviously new-found confidence, the production here moves to a gloriously widescreen, skyscraping beauty and vibrancy. And, whilst none of these EPs are remotely incoherent, only Second Language has a definitive sonic style from start to finish. Closing the set, ‘It’s A Kid’s World’ opens Disco Inferno’s final transmission, with next album Technicolour following on later, posthumously. Filching Iggy’s ‘Lust For Life ‘beat and throwing a cacophony of BBC kids samples it’s my least favourite song of theirs, but comes followed by ‘A Night On The Tiles’, a brilliantly bewildering three-minute sound story that sounds like nobody ever, including Disco Inferno. The curtain fell, appropriately, on ‘Lost In Fog’, a dark ambient birds-eye view of Earth, Crause, Wilmott and Whatley drifting out and out and out, never to come back.

Nothing went right for Disco Inferno though. Nobody heard and hardly anybody other than a hardcore at Melody Maker did anything to try and change that situation. Blighted by non-existent, indifferent, or just plain angry gig audiences, plagued by their own lack of finances and the dwindling fortunes of Rough Trade, things fell apart to nothing and nobody, except a hardcore fanbase to whom I was so proud to belong, noticed. You can read two excellent pieces charting the story of the band by Neil Kulkarni at The Quietus and an oral history of the band by Ned Raggett at Pitchfork.

For all the anger, frustration, despair, poignancy and very occasional optimism there is an undoubted joie de vivre about this music. The energy, the embrace the thrill of hurtling so maniacally into a sonic unknown,  an untapped well of potentialities that will probably remain that way as this rare combination will never align again. For those of us that love it, it feels like the truth and the future. But, for all the talk of disappointments, failures, ignorant audiences and idiot journalists, Disco Inferno doesn’t have to end on a sour note. Because you can go out and buy this utterly extraordinary music on vinyl or CD now and if you’ve never heard it before, these words, this sound, it’s going to Change Your Life. 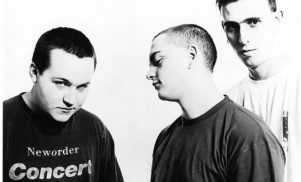 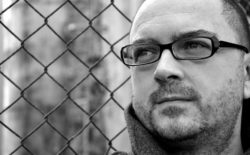