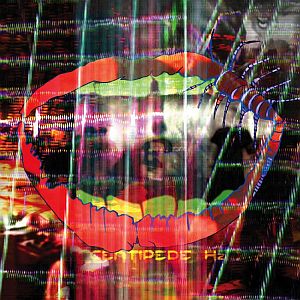 In all the commotion of Animal Collective’s jam-packed new album, it’s only after accounting for all the stuff that’s in there that you begin you realize what isn’t. The prog rock-informed Centipede Hz is what the Baltimore four-piece described in Rolling Stone as “relentless and aggressive” – a whirlwind of world music, digi gremlins, cybernetic tropicalia, crystalline electronica, noise, guitar and live percussion, delivered with fractured virtuosity. But the cost of such a dazzling feast of stimuli has been a certain element of romance. The problem with Centipede Hz is that there’s just no room for the listener’s own imagination, rendering it a difficult album to connect with.

With the American indie vanguard migrating over to electronica, a shrinking force in songwriting has been the spaces between guitar music’s adjoining parts. Spaces, or rather negative space, in which mystery burgeoned, where atmosphere and by extension a sense of place formed. For all it’s virtuality, even AC’s techno-influenced Merriweather Post Pavilion brought you to that lush pasture. But with every new LP comes more compaction. Letting their hive-imagination run wild in a room in El Paso (where MPP was conceived by emailed file-sharing, they’re jamming together here), undoubtedly the reunited friends are feeling liberated. Truly, you won’t hear a more restlessly untrammelled album this year, opening with ‘Moonjock’, a song that’s awestruck by its own limitlessness. But wild motion isn’t the same as creating a sense of space in which to move in. Before there was the suggestion of some heaven-bowed prairie-land which, enshrined on AC’s cavernous early hymnals, conveyed absolute freedom. Centipede Hz‘s closest kin in the AC oeuvre, Here Comes The Indian was similarly busy. But even then, the debris moved with a tidal sweep as opposed to churning.

The crush is most keenly felt on the album’s three-track midsection. Firstly because, beneath the clutter, they are Centipede Hz‘s most simple songs. Secondly, because it’s a suite of MPP-type songwriting, making it frustratingly easy to imagine what might have been had the band retained that approach to production – if, for example, the three songs here had been both refined and adrenalised by a ‘Summertime Clothes’-like glitterbeat. With its antsy structure and motormouth vocals, ‘Applesauce’ has enough going on already without the countless layers of percussion and electronic glossolalia, working only to smear its transitions and obfuscate its hooks (Lest we forget, MPP’s ‘My Girls’, sailed for two minutes on nothing other than a sequencer and vocals, so that the eventual arrival of drums landed like 2009’s defining moment). It’s the same story with ‘Father Time’, only whereas on ‘Applesauce’ it’s an air of roving delight that’s smothered, this time it’s languid melancholy that suffers at the hands of the overkill. Hawaiian synths establish a dreamy lilt, but between the twangy bass, tribal percussion and the endless stream of FX pings, the overall effect is more like a feeling of pressure. Once again, gorgeous vocal melody and devotional harmonies seem frustrated as opposed to struck far into the beyond.

‘Wide Eyed’, meanwhile, is an improvement. Penned by guitarist Deakin, the song profits by sculpting its litter of electronic babble into a rhythmic device. But, similarly to ‘Applesause’, the deep focus effect strived for is sabotaged by flat-light arrangements. There’s just too much in the mix for it to be immersive. ‘Pulleys’ sees an improvement, clearing a path for emotion by keeping the vocals high in the mix and the percussive low end dampened to a lush hum. ‘Mercury Man’ is again a touching song. Granted, it’s a a morass of activity, but it wins out by knowing where to put the percussion in relation to the pretty vocals and ethereal flourishes. It’s just a shame that Centipede Hz‘s strongest, most coherent and most melodically pleasing songs weren’t offered the same production deal.

If you forget about ‘being immersed’, however, there’s plenty of surface spectacle to be enjoyed. Undoubtedly AC’s most technically brilliant album, there aren’t many bands able to organise such a mass of information into fluid songs, while at the same time make it all sound like an ecstatic outpouring rather than a meticulous construction job. ‘Today’s Supernatural’ is representative of Centipede Hz‘s relative severity. It’s what Wowie Zowie acid rock would have sounded like had Zappa been a ’90s Warp fan, forming a kind of psyche-tronica mass. But rock it remains. With its crunchy guitar, screamed vocals and whirling organs, it’s more abrasive than anything in AC’s back catalogue. Elsewhere, the aforementioned ‘Moonjock’ is Animal Collective in fast-forward; glorified anarchy. Each section works as a sprung trigger for the next. If vocalist Avey Tare sings a pretty tune, the payback is an explosion of screaming lemmings with matching drum-line; or if the back section takes to swinging then the instant retort is the hurtling climax, followed by a minute of murmuring circuitry. Shifts in pace, tone and time signature, all encased in whizz pop fireworks and machine crackle.

All of which is perfectly instep with Centipede Hz‘s overarching theme of enmeshed radio signals, spiralling intertwined through space. The hitch is, you never get a sense of that infinite space here, outer or otherwise, because space itself is in short supply. In practice, Centipede Hz plays out like another post-indie meditation on information overload in the net-age; where the music, packed and hyper eclectic, is pursuant to the concept. It carries the same tenor of anxious joy struck by ‘post-everything’ icons Gang Gang Dance, the difference being that Gang Gang’s similarly interference-stricken, world music-peppered Saint Dympha melded future-phobia with a thrill for the endless possibilities of digital technology. Here, whereas depicting the world as a place of endless possibilities was Merriweather‘s metier, that quality is choked rather than accentuated by Centipede Hz‘s sprawling pallet and dazzling complexity. It’s as if by having every tool and style of every era and nation available to them at the press of a button has stripped AC’s world of its mystery; as if there’s nothing more to discover.