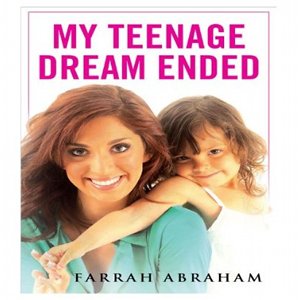 Ed note: We decided to run this review without a rating. It’s such an anomaly, more so than anything else FACT will review this year, that trying to fit it into any kind of scale seems pointless – there are no comparison points. Consider it either a 0/5 or a 5/5, depending on your perspective, tolerance and general sanity.

The feeling of being genuinely surprised to the point of bafflement by new music is a rare one – but Iowan multi-disciplinary artist Farrah Abraham’s recording debut may well be the strangest album of 2012. Body horror, the trauma of quotidian dysfunction, stream-of-consciousness catharsis and the meta-acknowledgement of the limitations of public expression are among the themes Abraham covers on My Teenage Dream Ended – but it’s the way in which she reflects them in stark, jagged electronic sounds and malfunctioning technology that makes it not just an unfathomable oddity, but a deeply compelling one.

Abraham is an aspiring model, sous-chef and author, though to date her main claim to fame is as part of the cast of MTV’s Teen Mom reality show. That’s important in assessing this album, though not for the kneejerk prejudices often elicited by the phrase “reality TV show star”. Reality shows home in on dysfunction and drama – weird, emotionally messy lives that they proceed to make even more bizarre; from teenage pregnancy to the death of her child’s father, to domestic violence to her own depression and substance abuse, 20-year-old Abraham has certainly qualified. My Teenage Dream Ended is an explicitly confessional work – indeed, it is intended as the soundtrack to Abraham’s autobiography of the same title, though whether one is meant to listen and read at the same time is unclear.

If so, it would be a rather distracting experience. My Teenage Dream Ended (the album) utilises a basic and familiar sonic palette – bass wobbles, crunching, mechanical electronics, frenetic beats and slatherings of Autotune – but puts them together in startling and jarring fashion. The core of the strangeness lies in Abraham’s vocals: disjointed, arrhythmic phrases, like pages ripped out of a teenager’s diary, either spoken, shouted or sung at apparently random pitches before being subjected to so much Autotune processing that they buckle and crack even further. “I’m the push behind the swing / I know everything we wanted,” she exclaims with disembodied, detached maternal guilt on ‘On My Own’, about as close as the album gets to a conventional song. Her vocals are twisted, metallic wreckage: on the numbed ‘Searching For Closure’, set against lullabic piano and strings, Abraham intones, “I’m holding back my tears my tongue this kills me” as though her body is literally shutting itself down.

Throughout, Abraham uses inhumanly processed electronics as a kind of refuge from both her body and mind – not that this lessens the sheer physicality of her music. ‘Unplanned Parenthood’ opens with a buzzing bass riff as though it’s pretending to be Peaches’ ‘Fuck The Pain Away’, before plunging into far more disturbing territory: vocals tumble unbidden from the machine (“This bump doesn’t go away…it feels like I’m going in on this alone”) as Abraham recoils from her own body in horror. An actual melody enters, inexplicably, in the last 30 seconds, albeit seemingly made out of a smoke alarm. Elsewhere, Abraham actually sounds like a dialled-in, fully-focused human on ‘Caught In The Act’, yelling fragmented fighting talk over freestyle-ish twinkles and synth strings knifing through space. The under-two-minutes convulsion that is ‘The Sunshine State’ opens with a four-to-the-floor beat, superclub fanfares and an ambiguous command – “FLA are my initials: appeal to me” – before it’s ruptured by a one-note riff, repeatedly slamming into the track like a hammer to the head as Abraham’s voice rises to a demented yell. ‘After Prom’ opens with the kind of chunky synth riff one might expect to morph into a ‘Starships’ or ‘Give Me Everything’ before it’s overtaken by the creepy click-click-click of cameras and horror movie whispers.

Strangely, there’s genuine beauty amidst the impenetrable difficulty here. An elegiac piano floats above saw noises and electronic storms on ‘The Phone Call That Changed My Life’; meanwhile, ‘With Out This Ring…’ is a luxuriant, gorgeous respite from the maelstrom of brokenness with its circular piano motif, plucked guitar and crashing drums straight out of an ’80s teen romance. Of course, there are still Abraham’s vocals chirrupping uncertainty insistently: “I don’t wanna make mistakes / I still need to make my mistakes,” she pleads, capturing a terrifying truism about being young and realising you have the entire rest of your life stretching before you.

My Teenage Dream Ended opens with the line “I can only put so much in a song”; Abraham ends ‘On My Own’ with the flat admission, “This is the best I can do.” In between, her treated voice ricochets around the bare walls of her uncompromising music, attempting to articulate confession but finally resorting to pure, unfiltered expression. Even when Abraham finally attempts a note of hope on album closer ‘Finally Getting Up From Rock Bottom’ – a sonic highlight, with its elephantine riff and looping, irresistible synth melody – she sounds as though she’s desperately trying to extricate herself from a machine that’s swallowed her whole. The creative process behind My Teenage Dream Ended remains a mystery – there are no writing or production credits on its tags in iTunes, the only outlet where it’s available – though there’s no real reason not to assume it was all Abraham’s work. The mainstream press and those familiar with Abraham via Teen Mom have greeted it with, largely, mockery – though one can imagine that, if given a moody, possibly anonymous, aesthetic, a Tumblr full of triangles and some straight-outta-Brooklyn blog hype, reaction in various quarters would be rather different. The only explanation Abraham herself has proffered was that she “was just playing around with music”. In a nutshell, that’s exactly what My Teenage Dream Ended does.