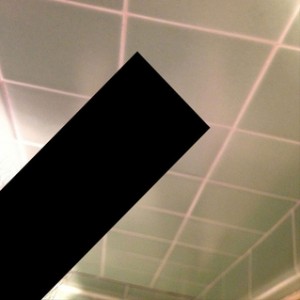 Hatred. This is Death Grips, what they embody. It’s taken roughy 22 months and 40 odd portions of wretchedness to frame this anomalous trio, who two years ago seemed to come out of nowhere and who still evade rationalisation. But when it comes down to it, the Death Grips experiment is all about hatred: that’s the master gene.

It’s what their increasingly rigid sound moves on. Hatred is hardening the music on No Love Deep Web into what is, three albums in, now a single-mindedness without levity or nuance; an increasingly one-dimensional splurge that follows the path of least resistance with a bleak inevitability. This is the meaning of Death Grips. Not despair, death or self-determination, or rebellion, or chaos, terror, depression or madness, or America as police-state, or California as technocratic Transylvania, but hatred. Both pure and purifying.

Hatred is what separates punk from rock and what, in music, separates destruction from self-destruction. Self-destruction because, as the saying goes, resentment is the only thing which eats its own container – never truer than in Death Grips’s case, who seem corroded by their breathless desperation to hate. Hatred is what drives the ever more dramatic tech man Flatlander, and cattle prods the hydraulic Zach Hill. It’s what makes superhuman the redoubtable Stefan ‘Ride’ Burnett. Ride, whose Geiger-like torso seems moulded by machine, and in whom Black Flag’s cult of physical rigour lives: a cult in which absolute self-control is what keeps your senses burning, keeps you hungry, and where the body is separate from the mind. Here Burnett will often talk about his body as if it’s an abstraction; something like a brick carcass, or a prison, or a mere vessel for hatred and also a slave to it.

In interviews he spouts theories about “masochism by information,” a “war of attrition”, or references Nietzsche’s duality of man thing: cerebral vivisection by exposure to advanced self-awareness in the net age. If Burnett sounds dehumanized that’s because he is. Because this is real. The hatred is real, and the cost of hatred is definitely real. So muscularly strained is his delivery you can really believe it’s taking a little bit of Burnett every time he opens his mouth. And its for that same reason that Death Grips are such an important and indeed alien prospect in this day and age. It’s so clear now, after an unrelenting three-album odyssey of insane energy, that their passion can only have been sustained by wrath. It simply is not possible for this degree of power to have come from love. Hatred is the working agent. It’s made them incontrovertibly the most aggressive hip hop act on the planet.

It’s a sound that stands up against any extreme music from any genre. Which is probably because No Love Deep Web utilises nearly every edgy sound in existence, from the bass-industrial stylings of K-Mart and RP Boo’s psychotic footwork, to Gatekeeper’s Carpenter-inspired techno. It make Death Grips kinetic in their rage, not merely settled on the grotesque like with death metal, or pulverisation like grindcore, or hideousness like black metal. It is an intensity achieved by means of tempestuous activity and friction between parts – conflict in its very DNA – rather than speed or sheer volume. And it’s a sound which again, with No Love Deep Web, offers a peerless depiction of what horror really means in underclass America – by method of showing rather than, as has traditionally been rap’s lingual M.O., telling. So effective is the expressionist production that as voyeurs of black American misery we are now dragged from the sidelines and through a window that’s usually shut, and made to live the spectacle; as if punished for our glee and glamorisation of danger and death. And indeed, much of the lyrical content here is directed at the frivolous spectators, have no illusions. We’ve seen RZA’s Shaolin purgatory, the inundating thrust of Bomb Squad’s avant squall and the infecting sleaze of Dre’s ghetto funk, and still, we were merely the voyeurs of hatred. Now, though, we’re hosts to it. Impregnated.

No Love Web Deep is another scintillating missive from one America’s most conceptually rich hip-hop acts. However, because it’s sometimes better to feel than to read, it’d be more useful if right now you get your headphones on and listen to this, sooner rather than after the article. Listen as slithering machinery merges with the dread perversity of Flatlander’s gothic grandeur, and as Burnett, free falling and hopeless, delivers the word “FEEL” – how it’s like a death rattle, like he’s expiring on completion, his final wrath-stoked particle of chemical energy spent.

‘Lock The Doors’ opens with the sound of tormented souls shrieking in the far distance. You picture the brow of a wind-scoured hill behind some desolate cemetery. But it’s not long before the tech arrives – the beats and the minimalist closed snare. Death Grips love binding the macabre to modernity. Unraveling at a funereal lumber, the track drowns slowly on a half muffled bassline – an ogre groaning just above the threshold of auditory perception. Ride talks about cold sweat, ‘sustained disgust’, and ‘subversive infiltration’. And as usual he’s caught halfway between God Complex chest-thumping and sexual submission, defiance and self-disgust. One minute he’s “the master of self-contained combust” or the “destroyer,” the next he’s begging the listener to stick him, cut him, drain him, suck him – cannibalise him by ritualistic candle light, imbibe his force. “I’ve got some shit to say, just for the fuck of it” he growls with taunting nihilism, as Flatlander delays his vocals through the ages. Hate for hate’s sake.

Elsewhere, ‘World Of Dogs’ works like a quasi drum’n’bass track made for those night crawlers of the supernatural state. Aside from maybe those in the Sandwell District family, its hard to think of another act that makes dancing such a bizarrely malevolent pursuit. Flatlander makes hooks by cutting Ride’s simian hollers into pained punctuations, between which the refrain of ‘It’s all suicide” just keeps on coming back, repeating on you. It also features Ride’s best vocal performance. “I’m a feral reality forming on mountains of teeth,” he incants, “feed me to this world of dogs / I’m obsolete.” Meanwhile, ‘Battle Rattle Stars Out The Sky’ applies footwork-like subs and hokey disco FX to synths that sound all ’80s slasher horror when in the assent, and in the queasy descent like falling mortars. Pop’ and ‘Stockton’ mark a welcome return to the austere space of ‘Guillotine’ – both tracks amounting to an exhaustive Ride and tribal drums.

There’s a suspicion that owing to time constraints, or maybe an acknowledgement on the band’s part that The Money Store was choking the would be converted, No Love Deep Web is both less intricate and less dense. The low end has been simplified, in that whereas before you’d have synths layered over noise, multiple rhythms and often some minimalist snare, here the band make do with one marauding synth noise or one beat, lending the big galumphing tracks like ‘No Love’ and ‘Deep Web’ a rock music feel and the faster tracks a more refined rave feel; a less flexible, more linear sound. Most notable, however. are the synth lines. Instead of a collision of textures and percussion, ‘World of Dogs’ and ‘Whammy”s bass takes the form of fat exhaust-pipe modulations that recall both Zed Bias and Vatican Shadow simultaneously. Another aspect of their new refinement is the trick of tempering the monotony of Ride’s hollering with spoken backing vocals or Ride’s own mutterings. It both lends variety and makes the tracks all the more threatening for their prowling feel.

With its airless production The Money Store was all about claustrophobia in the dark; a Kafka-esque sense of impossible muddles, repression and bodily decay in a climate of entrapment – Sacamentos inner city schemes. Contrastingly, No Love Web Deep is free to swing and burns bright with lungs full of mind sharpening petrol fumes. By mothballing the swampy fug and tensile detail, this time Death Grips pivot on razor-edged resolve and naked might. And yeah, anger is a gift.