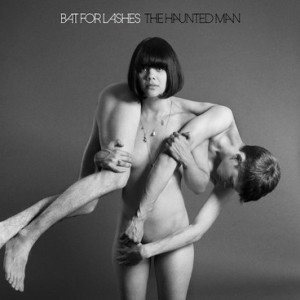 With maturity comes a certain weariness for simulation, for contriving a ‘sound’. Explaining to The Observer that she had grown tired of hiding, on Natasha Khan’s third album The Haunted Man, she has moved away from art-pop, unshackling from that indie imperative to have an ‘aesthetic’ – an imperative that’s occasionally been to the detriment of emotional traction.

Granted, Khan’s a heartfelt, passionate artist. She also has some substance about her: much less the hollow posturer than many of her hipster peers. And the archness-to-feeling ratio on her previous albums was well-balanced for art-pop. But there’s only one Bjork, able to combine it all: art, and cutting edge production, with devastating sincerity. In the past Khan’s emoting – certain notes, vocal styles, lyrics – seemed ultimately tooled to approximating a style or a concept (moony Spectorism on her debut or pan-mysticism on the followup) rather than ‘soul expression’; rendering the final product a little detached.

Here, though, Khan lets her style go where it might, in service to her emotions rather than an idea. Take opening track ‘Lilies’ for example. A reoccurring trend throughout the album, it’s Khan’s isolated voice, soaring into the gloom, that both pilots the track and provides the big moment. But moreover, in the absence of a looming art context Khan’s climatic ‘Thank God I’m alive’ feels unprecedentedly real and tonnes more moving for it. With enough production flourishes to transcend the artless Adele end of things – save the occasional bland track – the result is an arresting rites-of-passage unveiling, and one of those thrillingly courageous depictions of womanhood, with Khan displaying a certain strength that she’s rarely shown before.Without losing her identity and vaguely gothic tones, The Haunted Man lays it bare. An admittedly cliched direction but one which, in the context of a climate where eccentricity and authenticity are equated with rigid force, a la the Mumford-Florence axis of evil, Khan’s new restraint both stands out and penetrates. On ‘Lilies’ it’s only with the vocal peaks that the stentorian strings erupt, to stunning effect. That’s called nuance, Florence – ebb and flow you blustery migraine. That’s how you do Kate Bush. In the end, the bare sound only confirms what we’ve suspected all along– that Khan’s a skilled songwriter and melodist, whose deceptive warmth, genuine eccentricity and now central voice are all that’s needed to beguile the listener.

Lead single ‘Laura’ is enough of a validation of Khan’s chops when it comes to the fundamentals. Written about either Laura Palmer or a local transvestite, depending on who you ask, either way tragedy is in the air as Khan feeds John Grant through Roberta Flack and makes it all sound heroic solely on the strength of her vocals, a solemn but dreamy voice as rich as it is piercing. Lilting on the classic torch-song triumvirate of piano, stately brass and low cello, like ‘Lilies’ the song pivots on a single high note, similar to that same precipitous reach in Lana Del Rey’s ‘Video Games’ (“…Ho-ney.…is that true?”), whose co-writer Justin Parker collaborated with Khan on ‘Laura’. ‘Deep Sea Diver’ adopts the classic Bush-ian theme of fearful excitement in a burgeoning romance, the metaphor being the mysterious brine-y depths. Setting off on a line of tense synths and proceeding on brittle piano notes and parse electronic drums, the economic production style means that Khan’s first high-pitched line, “baby throw your head back, let your hair down”, comes in all stinging and uncomfortable. You can feel to the bones that frigid recoil in the face of a strange new love.

Post-punk remains an indirect influence on The Haunted Man, though not a pre-programming template. This time around, however, it’s the spiky, austere vein of post-punk that plays a hand, as opposed to the movement’s new wave and goth tail-end, as was the influence on Khan’s début and the synthpop Two Suns. ‘Oh Yeah’ blends rudimentary drum machine with raw Foxx-ian synth, sounding like a Chris & Cosey pop tune via mid-80s Bush, while ‘All Your Gold’ is a spare guitar track in the vein of Manc post-punk flame-bearer Lonelady. The album’s title track, meanwhile, comes over all This Heat with its male choir and martial snare. Indeed, in the true spirit of ’79, drums often supplant the lush atmospherics of previous albums. ‘Horses of The Sun’ mounts Khan’s queasy cries on tribal toms, whereas ‘Marilyn’ merges reverberated vocals with synthetic handclaps and clusters of double-kick bass drums. It creates a tenser, more immediate version of Khan’s Two Suns mysticism.

One major drawback to The Haunted Man‘s rough and ready style is that straight Bush-ian tracks like ‘Winter Fields’, with its movie score orchestrals and bassoon, seem quotidian next to the fantastical wonder Bush evoked. Other dampeners include the insipid ‘Rest Your Head’, vanilla and limp electronica with weak transitions, and ‘A Wall’ – an uninspired, staid bit of synth-pop.In both incidences, the track’s failings are more a matter of Khan’s songwriting nous faltering, which is more the exception than the rule: for the most part this is a composed, nourishing pop album.