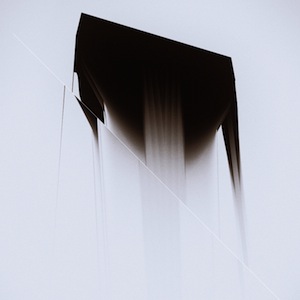 As Egyptrixx, David Psutka contorted various electronic dance influences through a prism of ambience and paranoia. His debut full-length for Night Slugs, Bible Eyes, worked towards the edges of that construct. Hiawatha, his project with alt rocker Ian McGettigan (Thrush Hermit, Camouflage Nights) utilizes a similar modus operandi, but instead of deconstructing the rhythms of UK funky, the palette is drawn from post-punk, darkwave, and drone metal.

The result, Language, is a psychedelic journey through the darker corners of Psutka and McGettigan’s influences. As Psutka revealed in his interview with FACT, the album was recorded with old school gear (“nearly nothing built after 1980”) and modern techniques, adding a contemporary sheen to sounds that have been in the collective consciousness (parts of it, at least) for decades.

Language opens with the pneumatic and pulsing ‘Hiawatha,’ each disparate and successive layer (including a submerged vocal line) making the whole greater than the parts. The technique, repeated throughout the album, acts as a subconscious tribute to the band’s namesake, who persuaded the various tribes of the Iroquois to band together to provide strength in numbers.

Psutka and McGettigan often forgo abstraction for songwriting that is relatively traditional in nature. ‘Glass’ and ‘Dogs of War’ are vocal-led darkwave, with icy bits of crystalline synth melody. On the latter, the moody vocals give a bit of hope to the gothic proceedings, which build to a feedback-laden crescendo before closing with ruptured guitar chords. Similarly, ‘Miracle Language’ is a disquieting siren song backed by an angelic choir.

The album makes several forays into instrumental experimentation. ‘Bella Coola’ is as desolate as the British Columbian outpost of the same name. The song opens and closes with the echos of air raid sirens before exposing the familiar combination of metallic bassline, steady percussion and synth arpeggio. The fittingly-titled ‘Caring Less and Less to See and Know You’ relies on the melted magnetic tape warping that appeared throughout Bible Eyes.

In the album’s most direct homage to its influences, ‘Old Black’ transforms the guitar-driven drone of the song (originally recorded by drone metal institution Earth) into something more synthetic, aided by Ohbijou’s ethereal chanting.

The album closes with ‘Permission,’ which like Bible Eyes‘ ‘Recital,’ is broken into two dichotomous parts. The first part rises and descends through a claustrophobic haunted house of static and unease, while the second is more meditative (and more than twice as long). ‘Permission (Part II)’ bookends the album with another experiment in textures, adding layers until the song collapses into itself with a final, detuned swell. The note persists for nearly half a minute: a solemn end to a solemn album.