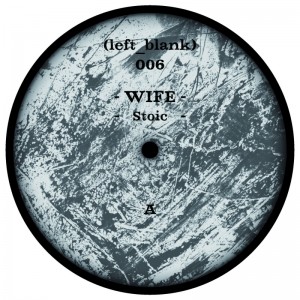 While nobody could say thereʼs a deficit of talent in electronic music, sparks of genuine humanity and quality songwriting are sometimes sidelined, with slick production and honed functionality often the order of the day. Here to challenge this tendency towards polished but anaemic music is James Kelly, formerly of black metal band Altar Of Plagues and now, as WIFE, releasing his debut EP on Left_blank. As artists like The Haxan Cloak, Raime and Vatican Shadow reinvigorate interest in electronic music from the gloomier end of the spectrum, WIFE proves a worthy addition to their ranks, even at this early stage showcasing an uncompromising vision.

Stoic, in fact, has a asotounding level of complexity and richness toits palette. Sludgy synths, plangent percussion and static washes of noise crescendo theatrically in ʻBodies’, the results swampy and warmly viscous, like decayed fruit. WIFE chops and processes his vocals into smudged, largely incomprehensible passages, with a textural rather than narrative effect; the 2-step beats, waves of ambient noise and subtle dynamics of ʻShardsʼ are set off by his darkly resonating harmonies. Each track is charged with intimacy as Kelly varies the timbre and atmosphere of his voice, from the wail of ʻCirclesʼ to the insidious, monotonous half-whisper of ʻTrialsʼ. The sweetly melancholic, pitch-shifted tones in ʻEndingsʼ might not be wholly original but their effect is no less haunting for it.

Morbidity and ritual are recurrent themes on Stoic, from the refrain in ʻTrialsʼ intoned with the portentous, eye-gleaming quality of an obsessional mantra, to the lyrical tropes of blackness, loss, descent and guilt. WIFEʼs metal background is at the fore in EP highlight ʻCirclesʼ, where his vocals are underpinned by tense chords and waves of distortion before giving way to off-kilter percussion. Mangled guitar tones and stretched, looped harmonies swell and diminish, punctuated by a hefty kick drum. Itʼs powerful stuff, imbued with moody occultism and backed up by an obvious songwriting talent. Weirder still is closing track ʻEndingsʼ, a strange beast that progresses from a sombre, cavernous dirge to an industrial-tinged melodic epic, traversing the space between metal and club music. Its metallic percussion and lugubrious groove ebb into the ether, leaving a palpable disquiet in their wake.

Although his sound is impressively diverse, Kelly never comes across as precocious, and a deep understanding of expressive space reinforces the enveloping, potent moods he creates. Atmospheres range from sticky and intimate to cold and industrial, but never lose their sense of human fragility. In a world where raw talent can sometimes take a backseat to technical ability, WIFEʼs abundance of both is more than welcome.