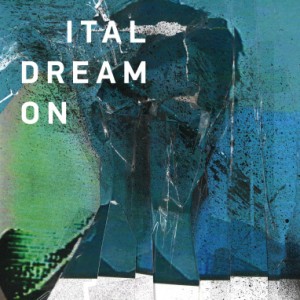 Dream On is Daniel Martin-McCormick’s second LP under the Ital name, following hot on the heels of Hive Mind, released on Planet Mu earlier this year. As the largest statement yet to come out of the DIY house and techno community clustered around LA’s 100% Silk imprint, expectations for that record were high. Unfortunately it was a tantalising but ultimately disappointing prospect, outlining an oddly glossy form of house music psychedelia that had its moments of brilliance but too often felt sonically brittle, or structurally pedestrian, or both.

Still, the potential latent in the formula couldn’t be denied, and Dream On sees Martin-McCormick take another rummage through the distinctive toolbox of sounds and techniques he’s accrued for himself. In fact, the contiguity between then and now is almost too neat – perhaps an inevitable consequence of releasing two albums in the space of ten months. Opener ‘Despot’, for example, places us in familiar terrain from the outset with a dense, muscular house loop and plastic chords that drone and slide with not-altogether-pleasant digital brashness. As things progress we don’t travel all that far from our starting point, but the texture is dusted with little spurts of delay, neat cross-rhythms are punted across the stereo field and looped vocal samples veer squiffily off key – in other words, Martin-McCormick resorts to the same favouring of incidental detail over larger-scale structural clarity that either blighted or augmented Hive Mind, depending on who you ask.

The remaining full-length tracks follow similar patterns of intensity – explicate, break down, rebuild – but see Martin-McCormick throwing some fresher ideas into the mix. ‘Boi’ thrives on a marvellously thick, rolling beat, all toms, claps and sticks, with just the slightest touch of swing to keep things spicy. ‘What A Mess’ is happy to wallow in relative stasis, its melancholic organ loop providing the foundation while an odd falsetto monologue is subjected to all kinds of tortuous processing – lurid delays, bursts of distortion. ‘Deep Cut (Live Edit)’ gets closest to supplying the anthemic hook that lifts the odd Ital production onto a higher plane (cf. the project’s debut release, ‘Ital’s Theme’), almost managing to redeem the basic aimlessness of its construction. ‘Enrique’, meanwhile, is the starkest departure, its sliding synth leads sounding as if untethered from some main-room electro house banger to wander in the dank wilderness; unfortunately the pay off is somewhat muted, an approximation of warehouse techno that lacks either precision of execution or iconoclastic boldness.

That, in a nutshell, is the problem with both this record and its predecessor: a persistent falling between polar opposites – dancefloor discipline on the one hand and willful subversion on the other – even if you sense that the producer is mostly plumping for the latter. As with Hive Mind, the record’s most interesting moments are its briefest, almost as if Martin-McCormick’s strongest ideas are the implied ones, the unrealised ones. The two minute-long ‘Housecapella’, with its warm pads and shuffling, multi-layered beat, could perhaps more than any have been suited to life as a slow-burning quasi-disco epic; the excellently titled ‘Eat Shit (Waterfall Mix)’, meanwhile, delights in exploding an innocuous synth figure into woozy grotesquerie, inducing it to pop, squeal and sputter whilst unobtrusive percussion keeps time. Going on evidence, we know that Martin-McCormick is captivated by the volatile power of his machines – you only have to see him live, headbanging furiously, pushing his mixer impetuously into the red as it spews thick clots of feedback into the crowd, to know that. Unfortunately, his two full-length studio efforts too often fail to break free of the shackles of digital order: clean, contained, controlled.