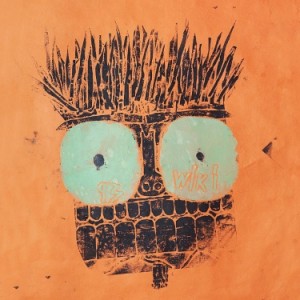 Ratking, this teenaged buzz-generating four-piece from New York, are what you might call quintessential ‘indie rap’. There’s the slacker image and the punk rock backstory. There’s the cosmopolitan influences – a mix of Suicide, ODB and Animal Collective – and then the production, which is abstract, wilfully scuzzed and frequently dissonant. Like Death Grips they look to dance genres for beat styles, while their lyrical content is neither materialist nor social-conscious. Signed to XL, remixers of King Krule songs, they are to indie rap what Belle And Sebastian are to being a wanker [sorry, but you can’t fault 1996-98 B&S – cardigan-wearing Ed]. If this 7-track EP is anything to go by, they’re also great artists.

Some call this kind of rap ‘post hip-hop’, including Ratking. But really, Wiki93 and many other indie albums take a backwards look – to hip-hop’s avant-garde roots. Specifically, in Ratking’s case, Public Enemy and the Bomb Squad’s production. Or you can look further back, to the great New York era when a unified counterculture – hip hop, disco and new wave – traded ideas, an era epitomised by the quasi-nexus that was ESG. With their post-punk feel and bohemian approach to samples, it’s in this same tradition that Ratking operate. Which is to be celebrated. Consider too, Afrika Bambaataa: typical of hip-hop’s beginnings in melting pot hoods, he sampled Kraftwerk and in the process more or less invented electro. This was an guy who moved hip-hop into the future, but who today would be labelled ‘hipster’ for his influences, illegitimated by the same rap cognoscenti who disregard indie rap. It’s simple, Ratking offer innovative production, rebellion, eclecticism, a rejection of cliché and generally a call for thinking outside the box. So call it hipster-hop if you like. It makes no odds to the facts. It’s telling that more and more these days the hip-hop press will plump for labelling an indie rap act ‘experimental-rap’. It’s about right.

‘Comic’ is the stand-out. Featuring a team effort from emcees Patrick ‘Wiki’ Morales and MC Hak, the teens scream both surrealist slogans and vocal hooks (“C-C-C-Comic!”) in rap-punk style, over Ramon and Sporting Life’s neuro-funk production. Like some mutant brand of horrorcore, after an intro of John Carpenter synths a buzzsaw sinewave erupts over a jungle beat, at which point Wiki’s flow morphs into a ragga-via-Atlanta whine. It’s thrilling, as is the similar ‘Sporting Life’. Like a lot of this brain-themed hip-hop (Shabazz Palaces, FlyLo etc), ‘Sporting Life’ conspires to fuck with your cerebrum. The juxtaposition between the constancy of the sample’s drone and the unpredictable rhythm – a discontinuous mix of sparse kick and fits of offbeat snare – makes no sense in your mind’s eye. It’s maybe what footwork would sound like spliced with Young Money’s house style.

The less intense tracks are just as imaginative. ‘Wikispeaks’ puts mid 90s East Coast through an Anticon filter, ‘646-704-2610’ is a fresh-sounding take on boom-bap, and ‘Piece Of Shit’ just might be the most effectually psychedelic hip-hop track in years. An organ loop anchors sub-bass and icicle-like FX, while Wiki incorporates heavy panting into his Eminem-ian flow and Hak intones like a hooded monk. Like the to TI/Clams Casino production style, it’s also a deceptively macabre track, as if they aren’t alone behind that heavy fog of blunt smoke. A recurring vocal sample of “I’m not really into people too much” can be heard towards the end.

And they lack nothing in the substance department, another accusation often levelled at indie rap. Because, this is also a great New York album, capturing the texture of the city, the kinetic tension, permanent momentum. They journey an after-hours Manhattan, all anonymity in anomie, between crosstown traffic and below rattling transit. They rove steel canyons, feeling young and vague, the short and fast loops redolent of glitch’d car horns and sirens, the anarchic arrangements like a blurred series of neighbourhoods, of moving in an out of basements and people’s lives, everything happening at once, in a megalithic modern space – filled out by the production’s far-vision reverb. In three lines Hak nails the album:“City moving / contemplating/ train racing” – recited on ‘Retired Sports’, a slice of measured rap narration that recalls, oddly, Mike Skinner’s turn on ‘Blinded By The Lights’. With Ramon and Sporting Life’s deceptively panoramic production, together with the lyrical wording, the track feels epic, almost existential, which is where the group’s love of Vonnegut’s terse philosophical sci-fi comes in to it. “We’re smacked together then ripped apart / the city moves / stop-by-stop / day-by- day / lost in time / lost in time” Hak raps, while behind him a tannoy-like vocal sample repeats infinitely: “Once again, Once again”. Great stuff.