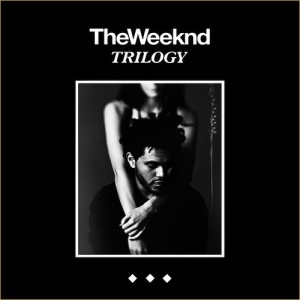 Who is the Weeknd? Or rather, who are ‘The Weakened’ of that pointed spelling quirk? On Trilogy’s stage-setting opener, ‘High For This’, we find Abel Tesfaye in his two-floor loft, coaxing another of his victims into consumption. It’s a running theme throughout, like a ritual, as if the narcotising XO is the transfigured blood of this angel-faced killer. As to what comes next… although the Canadian prodigy is a master of double meaning and ambiguity, this time the signs are pretty obvious. The clue is in the very first line, “You don’t know what’s in store”. What initially seems a tip to enhance the ecstasy he’s about to administer, Tesfaye’s suggestion that “You wanna be high for this” is really a warning – that she anaesthetize herself to a mutilation. Before, he threatens to turn the scenario into ‘a nightmare / Elm Street”. ‘High For This’ is a point of no return for the listener too. Always performing his seductions with one eye on the hidden camera, that being us, at the gates of a netherworld Tesfaye’s message is to get out while you still can.

In the world presented to us by The Weeknd’s epic Faustian psychodrama, ‘The Weakened’ are men whose souls are diminishing with every consummation of their vampirish urges. Spirited through faded, spectral textures, they are translucent with vanity and self-loathing; invisible as they pass the mirrors that palisade those penthouse citadels. It’s an obvious one, but Tesfaye has a good counterpart in Brett Easton Ellis’ Patrick Bateman, and the preening sociopath’s insistence that “I simply am…not…there’. In a world of unlimited pleasure, that which nourishes you destroys you. And still, the air of empty dissatisfaction is all-consuming.

An r’n’b album with few equals in terms of narrational ambition, Trilogy doesn’t just expose or subvert the womanising male archetype of modern r’n’b, it destroys it, by rendering it quaintly one-dimensional. By Trilogy’s end, the model seems a psychologically clumsy anachronism, a little like how the cowboy archetype seemed by the ‘60s. And with its demise goes nearly 30 years of unchallenged male gaze. Trilogy is a ghost story, only it’s the protagonists who are the ghosts and the just-out-of frame spooks the flesh and blood, the perennially muted voice of the woman. They are merely the ‘hosts’, warm bodies fated to be carriers of Tesfaye’s addictions to money, sex, and drugs. “Got a brand new girl, call her Rudolph / she’ll probably OD before I show her to momma” he mutters on ‘The Party & The After-Party’. Trilogy comprises three albums – House Of Balloons, Thursday and Echoes Of Silence, released in that order over the course of 2011 and reissued here by Universal Republic. Suffice to say, it’s pretty fucked up.

The really disturbing thing is, there’s nothing intentional, or ‘meta’, about it. Tesfaye’s only being himself. Despite the fantastical sheen of some Roman à clef caricaturing, and a strong sense that he’s playing for the fourth wall, there’s an alarming lack of self-awareness here – evinced partly by an alarming measure of self-pity. Tesfaye really is that conflicted, and that corrupted. Drake and Kanye are amateurs in comparison. Never before has r’n’b’s devil’s barter between pleasure and shame been so deliriously disarranged, unquantifiable, intoxicating or plain horrific, which is why The Weeknd has attracted so many listeners from outside the r’n’b hardcore. Applicable to a pretty chunk of the genre’s output, contemporary r’n’b’s simplistic characterisation can seem tedious to passing trade, while the constant discourse on sex, or sexual prowess, is sorely missing a context. But this way they get an anti-hero; a Travis Bickle to Ne-Yo’s Gary Cooper. Call it D’angelo’s shadowed Voodoo remade by a cherubic egomaniac with a drug problem.

The sentiment is made more sinister by the sheer seductiveness of the production, devised by fellow Canadians Martin ‘Doc’ McKinney, Illangelo and the formerly uncredited Zodiac, only acknowledged when Vice revealed that he’d co-produced several of House of Balloon‘s key tracks. Even at its most oppressive (in particular the songs from Thursday), every haunted note of Trilogy seems blissful. You’ve got the sugar-fume textures and the lush reverb, the voluptuously glitzy synths and the unreal perfection of Tesfaye’s deftly autotuned vocals – his angelic voice hiding a glaring intent (Tesfaye often describes his face as something blank – unrecognisable within the shadows, which is starkly telling of Tesfaye’s self-image). Finally there’s the fact that the Canadian has a seemingly endless resource of irresistible melodies.

Comparisons to Michael Jackson are inevitable, and Echoes Of Silence‘s cover of ‘Dirty Diana’ is logical, not just for Tesfaye’s vocal likeness to MJ’s girly tones, but because ‘Dirty Diana’ – here rechristened simply ‘DD’ – was one of Jackson’s most emotionally complex and all-out darkest singles, and a very Weeknd-ian tale of groupie sex and the inevitable discarding. The difference being, MJ was an eyewitness while Tesfaye is the perpetrator.

But hey, it’s pop music didn’t you know? And before the listless wastelands of Thursday and Echoes, we’re treated to a pop masterpiece. Nine perfect songs over an economic but massive-feeling 49 minutes, House Of Balloons sports a central trio of relatively benevolent tracks, including the beatifically strummed ‘The Morning’ and ‘The Party and The After Party’, with its shoegazey Beach House sample. But the suite is bracketed by darkness. The Siouxie & The Banshees-sampling title track is Drake’s self-loathing in fast forward; ramped up to a kind of spinning top of vainglorious self-destruction as Tesfaye bowls around the city from VIP areas to hotel room.

Like Echoes’ Initiation’, its two-suite structure presents two sides of the same schizophrenic psyche. Meanwhile, mingling with ‘Coming Down”s lusty yearning are the first signs of playboy weariness: pain hasn’t sounded this sexual since Marvin. On ‘Loft Music’, when paired with Zodiac’s Clams-meets-The Lost Boys production, Tesfaye’s “Cause I’m only fucking 20 year girl…’ becomes an incandescent statement of narcissistic immortality. But it’s easy to miss that ‘Loft Music’, and by extension his latest seduction story, begins with the line “They say my brain melting”. By this point the wheels are coming off, but in the Irvine Welsh vein of things he’s piling misery on misery, unable to stop himself. On closer ‘The Knowing’, it’s revealed that Tesfaye’s been cuckolded by one of his many playthings. And because deep down he’s really just an insecure, hypocritical prick, it’s cue for an existential crisis that hits like a wrecking ball. In a shower of synth shards the superego implodes like an all glass skyscraper, sinking in slow motion with an operatic immensity.

If Houses Of Balloons depicts an unreal life of decadence, on Thursday Tesfaye is unravelling into a similarly unreal state of dislocation and disassociation. In a certain respect it’s the most interesting album of the three, as Tesfaye’s still at the party, yet beginning to struggle terrifically. Consequently, on the bleakly comic ‘The Zone’ he’s assuring his girl that he’ll get around to satisfying her, while at the same time pleading “I don’t wanna die tonight, baby.” ‘The Birds’ offers an incongruous mix of big drum-lines and rampant self-loathing, while there’s the lonely-in-the-crowd theme on horror-rocker ‘Life of The Party’ and boredom on the eve of the weekend on ‘Thursday’.

After that, and after the party, comes the afterlife – with the almost perfectly titled Echoes Of Silence. Holed up in his lair-like loft, Tesfaye’s isolation is total. The world-straddling star of ‘Loft Music’ is no more, reduced to nothing more than a faint disembodied voice, begging ‘her’ not to leave his “little life” – as on the title track. But it’s with ‘Initiation’ that he really hits rock bottom. And it’s at this point, with Tesfaye drifting beyond redemption, that Trilogy tests the resolve of even the strongest constitutions. Put simply, ‘Initiation’ concerns a gang-bang, with Tesfaye brokering the deal: “I’ve got a test for you / You said you want my heart? / Well baby you can have it all / There’s just something I need from you / To meet my boys / I’ve got a lot of boys / And we can make you right”. Very possibly the most depraved pop song since ‘Wave Of Mutilation’, Tesfaye’s voice warps woozily between pitches, from ogre to helium-voiced goblin and back again, as if he’s peering through a codeine-fucked haze at a distorting mirror. Believe it or not, it isn’t Echoes’ strangest moment, which comes in the shape of ‘Outside’. Only Tesfaye would write a r’n’b song about agoraphobia, with ‘Outside’s mournful Japanese synths buttressing the refrain: “When I’m done with you, you won’t want to go…outside.” – as if he’s ‘turned’ her (in vamp speak) just so he’ll have some company.

Of the three new tracks featured on Trilogy -‘Twenty Eight’, ‘Valerie’ and Till Dawn (Here Comes The Sun)’ – it’s ‘Twenty Eight’ that stands out. On the surface it’s an almost anodyne piano ballad. But true to form, everything is not as it seems. Sequenced at the end of House Of Balloons, it establishes Thursday’s narrative: Tesfaye’s withdrawal from the party into paranoiac reclusion. Based around the rule of vampire folklore that decrees that the beastie cant enter your home unless invited (a concept once invoked by a surprisingly likeminded artist in Morissey, in the song ‘Let the Right One Slip In’), on ‘Twenty Eight’ the tables are turned as the now vulnerable Tesfaye becomes the terrorized. Mortified by the still-ravenous groupie in his bed, he agonizes: “I’m so wrong / So wrong / To let you in my home… Now you know where I sleep,” adding “…I’ve never felt so weak”. Of course it’s really about a fear of intimacy – the alleged syndrome of every alpha super-bonker.

As for the other two new songs, ‘Valerie’ is in fact a career dud. Redolent of some 90’s r’n’b’ boyband, it seems a shallow and almost tween-friendly track by Tesfaye’s standards. But crucially it’s too obvious and jaunty to fit as an ending to Thursday’s obtuse, detached numbness. ‘Till Dawn (Here Comes The Sun)’, now the closing statement of Echoes Of Silence, is another anomaly – though this time in a good way. Provoking a hearty double-take, it’s Tesfaye doing ‘80s synthwave, albeit with a washed out twist. Another double-take later and the propulsive bass-line is evoking…well, hope. It seems that finally, after a long, long night of the soul, comes the morning. With it’s measured emoting and steady, less dramatic trajectory, the song conveys the newfound control of a recovering addict, stepping into the daylight and a hushed normality. It now caps Echoes open-ended drift, bringing a bit of feel-good circularity to the trilogy’s story arc. Will it last, though? Probably not. Once a junkie, always a junkie.