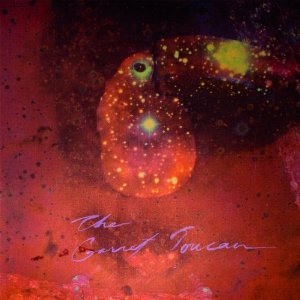 Hallucinations ahoy! And all aboard the good ship The Garnet Toucan, finale of Spencer Clark’s (one half of California group Skaters – the other half being James Ferraro) brain-loosening concept series, The Romance Audio Trilogy.

According to Clark this project was dedicated to finding ‘a symbolic, exotic animal to unleash a psychoactive environment of expression that leads one to an elaborate meeting with the natural world… uncovering the symbolic animal’s transfiguration into the outerzone of infinite space’ (quite). Preceded by Bamboo For Two and Make Mine, Macaw, this had previously entailed an abundance of parrot appreciation, with much attention lavished upon his pet parrot, Belafonte.

However, what with parrots being jealous birds, Belafonte may be shocked to find that Clark’s affections have strayed for this final instalment, his preoccupations now focused upon another fine, colourful bird.

The Garnet Toucan continues a tropical, tribal, low fidelity sound, made primarily with keyboards, mid-range wood-and-skin percussion and garbled vocal utterances. The results are akin to something between Ducktails and the score of The Invasion of Thunderbolt Pagoda, a bedroom-produced otherworldliness that updates a historic aesthetic of cosmic, psychedelic musical experiences and, somehow, floats free of it too.

No doubt fully aware of potential cliché, Clark conducts the project with subversive flare, mixing in a gleefully tongue-in-cheek approach to something genuinely full of wonder and horror; if The Garnet Toucan is a voyage it is that of a cruise ship entering a parallel world, skirting lands of primeval cannibals, Monopoly Child Star Searchers the resident band accompanying its fabulous doom.

This doesn’t mean it isn’t serious, however. All the tracks on offer are anxious, even when jolly. Some instrumentation might cause guffaws, but this would quickly dissolve into undeniable discomfort: detuned organs wail, reed instruments fart, panpipes bellow; guttural voices grunt, wretch and question unintelligibly; repetitive hand drums add palpable, often-menacing tension despite their subdued high pitch.

Each track contains a mixture of all of these elements, reconfigured in a myriad of ways as different shapes and intent. Much of the lead melodies are loosely improvised themes, their fleeting movements adding to an air of exploration and discovery, occasional discords and ‘wrong’ notes only reinforcing the effect. Most surprising, however, is the consistency on offer; with no duff material featuring in The Garnet Toucan’s eight episodes, Clark has managed to create something quite encapsulated through his idiosyncratic preoccupations.

The Garnet Toucan is therefore a successfully canny, heady mixture of wide-eyed fascination and disturbing revelations. While Clark’s proclamation that ‘the parrot or toucan is thought of as a mediator between human and nature’ may not quite cut it with his pet, both animals have certainly helped him brew some brilliantly rich music as Monopoly Child Star Searchers. (Sorry Belafonte).