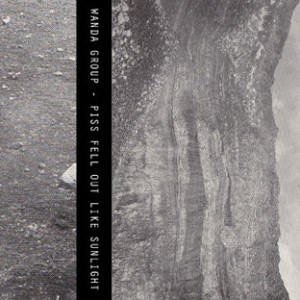 I was first put on to WANDA GROUP (capitals necessary – have you seen his Twitter feed?) by Mr. Beatnick, his description being great in itself: ‘minutes of hiss and then – maybe – a kick drum’. He meant it in the best, most flippant way, having become pretty obsessed by the latest project of Louis Johnstone, previously of Dem Hunger and a myriad of other pseudonyms.

Looking back on 2011 with this new information, it probably comes as no coincidence that one of the most standout pieces of music I received was a split release on Astro:Dynamics by GG ALIEN and GSD – both Johnstone side projects. And yet, before I even had time to get excited about the prospect of gathering more of his music, the consistently brilliant Opal Tapes casually passed on their latest release: WANDA GROUP’s Piss Fell Like Sunlight.

Released on cassette, each side is around 20 minutes in length, two ‘mixes’ of shorter compositions, like those on his YouTube feed. These bleed seamlessly into and through each other, Side A collectively becoming ‘PANS OUT IN THE AFTERLIFE’, Side B ‘HER STOMACH ON TERROR’. Created on all kinds of lo-fi software, it is very much of that ‘mulchy’ oeuvre of very textural music often released on tape formats, yet for all its organic qualities it is deeply, distinctly, uncompromisingly computer-based in its aesthetic.

Piss Fell Out Light Sunlight is like a naïve device processing the world around it, spitting out conclusions as a stream of semi-recognisable human signifiers: a warped voice; a tiny, obliterated melodic theme or fragment; fluttering and stuttering elements as anxious rhythms, when they do very rarely appear; a constant phasing of hiss and crackle conjuring up movement.

And yet the other side of its character is something wholly reckless, a lurching, blurry-visioned, bizarrely lovable monstrosity. It is held in check by a remarkably quiet overall volume and an almost academic intuitive patience in its pace, sedating potentially wild outbursts. The overall effect is modest, controlled, but unpredictable and hairy. (Hairy computer music may even be a good analogy for it).

Despite the low fidelity, the timbres are surprisingly far ranging for the limited technology Johnstone uses, enough to suggest that only a portion of what he has been creating has been used here. Because of this, the sustained presence of static textures, the plastic form and the recurrence of certain voicings never get restrictive or boring in its 40 minutes.

There’s definitely something about Johnstone. Previously I found I liked large themes and elements of his music more so than the finished tracks, but whatever direction he has travelled in since, I am really drawn to this particular project’s outcome. Piss Fell Out Like Sunlightis both an excellent introduction to and, judging by older material, continuation of WANDA GROUP, but is also an especially promising hint of further intrigue to come.