Teklife Vol.2: What You Need 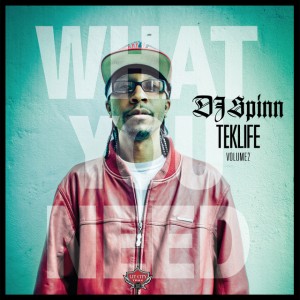 Footwork was in flux in 2012. And not necessarily in a good way. In what was a massive year for the genre, what we were looking at was a hyper-local scene, perhaps the last of its kind in history before the net renders such phenomena obsolete, engineering its own commercial dilution. From the underground to the overground with a little of the genre’s essence lost in commercial translation. There’s a defanging afoot.

Compare the Low End scene’s output circa 2007 to the majority of footwork’s event releases in 2012 – most notably the tasteful Da Mind Of Traxman and the none-more commercial What You Need. Note the sharp contrast between What You Need‘s lounge-chilled ‘Let Me Baby’ and DJ Chip’s ‘Reppin’ The Chi’ from 2007, or DJ Clent’s formative ‘Third World’ – the missing link between ghetto house and juke from way back in 1998. Even compare Bangs & Works Vol. 1 to its 2011 successor, or hell, anything on What You Need to Spinn’s gnarley ‘Good Good Shit’, from 2010. 2012 saw many of footwork’s most notable producers migrate from the abstract avant-trash aesthetic of Deeon-era ghetto house to something somewhat anaemically accessible.

What in 2007 was a stern, recursive and very odd genre – closer in spirit to ghetto house with its obtusity and oddly splayed lust – is becoming an increasingly colourful, upfront and outward-facing music. Footwork: the brand. Whereas Clent kept it real with 2012’s Two Feet On The Ground (the title perhaps a reference to his aspirational peers), Rashad’s year-end list-topping behemoth was, if bludgeoning and steely, notably panoramic. Stadium footwork. Tellingly titled Welcome To The Chi, it’s clear that with his sophomore effort Rashad was intent on bringing footwork to the world, or rather recalibrating the genre by stripping it of its esoterica, so that it meets the world half way. On this front, however, it’s Spinn who’s leading the charge.

The producer seems a man possessed. Spinn is convinced that, like his beloved jazz, footwork should by rights, and indeed will, transcend its regional niche. He’s business-organised, crew-organised and is the Low End scene’s self-appointed and very visible spokesman. Last year he and Rashad took the footwork show on the road, with a worldwide date calendar that smacked of a massive promotional tour for the scene. In fact, the Tek Life series resembles a polished introductory pack for would-be fans. All things considered then, it’s no coincidence that Spinn’s music is the scene’s most welcoming and mainstream-tooled.

Showcasing the producer’s instantly recognizable style, What You Need is more or less a how-to guide for crossover footwork. An ultra-delicate form of the genre, fat bass smears and rumbling kicks are in short supply, while footwork’s lynchpin toms are a background concern compared to the mid-range, populated by either spindly or soft-edged sounds: reedy FX or gossamer pads (the title track is a tweaked version of The Weeknd). This is arguably the prettiest footwork album ever released. Then there’s the comforting familiarity that comes with anchoring the songs in relatable genres, with a predominance of hip-hop-influenced tracks and soul-esque cuts making it easier for newcomers to get on board. ‘Do My Dance’ is essentially trap-rap, if beat-scrambled.

Moreover, the soul samples used are mostly of an ethereal, gracious nature – light organ or gently plucked stings – whereas in the past an elephantine kind of brass was the soul norm for sample sources. Granted, ‘Horn Chemist’ uses brass. But compare the way brass is used on that track to, say, Jlin’s crunk-macabre ‘Asylum’. Worlds apart. Also notable is the heavy use of vocal samples which lends a human feel while, crucially, steering the sound away from the abstract. In fact, the Rashad co-produced refix of Kayne’s ‘Mercy’ features full rap verses – rare for the genre. For precisely the same reason it’s the most ordinary cut on the album. Without rapidly chopped samples and sample flips, footwork sounds lethargic. What’s more, across the album Spinn rejects ghetto house’s amphetamine tempos for an altogether more leisurely pace. It’ll be interesting to see if What You Need is played at the dance level of footwork, as this is headphone music for sure: soothing and luxurious for the ears. The last remnants of ghetto house – that supremely functional and supremely bizarre dance genre – have here been stamped out.

Meanwhile, many of the words the producer chooses to glitch emphasise pleasantries and positivity, whereas in the past tracks often looped on booty-bass profanities or simply the word ‘work’ – somehow reflective of both the post-industrial drudgery of life in South Chicago and the work-like nature of those churning dance battles. Indeed, both sonically and tonally the creaky MPC-made era of footwork often packed an ’80s industrial undertone; here, that feel, along with a lot of footwork’s tension, is jettisoned in favour of a musicianly approach. Spinn’s sing-songy, texturally diverse and structurally poppy sound follows a producer-as-musician model, as opposed to the producer-as-machinist model of much footwork. Gone is the harsh and the jackin’ – replaced with a classicist, organic feel. All warmth and vinyl heritage.

Incidentally, What You Need falls short in the one area of footwork production that usually renders it futuristic: percussion. The album is decidedly less virtuoso in that respect when compared to, say, DJ Nate or Boylan’s music, and the high proportion of hip-hop-informed tracks lends a somewhat trudging boom-bap schlep to proceedings. On ‘Dey Comin’ the percussion seems like an afterthought – the swishy snares merely running parallel with the sample. There’s little interplay between the two parts.

Fortunately Spinn pulls it back in the third act, by staying truer to the original spirit of this lo-fi, otherworldly gonzo-genre. As desolate and remote as it is skuzzy and raw, it’s in this section of the album where the potency of cheap music is in full effect. The hyper-kinetic ‘Dance Floor Packed’ gets quintessential – returning the sound to, well, the dance floor. ‘Over There (Getting It)’ is, if slinky, simultaneously lascivious and menacingly strange – the titular sample-flip disembodied and repeated.

If nothing else, What You Need proves footwork is still evolving. Which, considering the genre is a stately nine or so years old, is something to be grateful for. Even so, you can’t help but feel Spinn is throwing out the baby with the bath water, compelled as he is to venture on a completely unnecessary crusade for legitimacy and what he misguidedly considers to be ‘class’, when the Tek Life crew have all the class they’ll ever need. “Footwork is not a fad” he protested in an interview with FACT last year. Many more albums like What You Need and it soon will be.