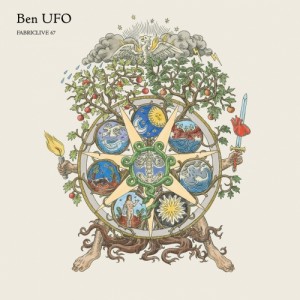 It’s been just over a year since Ben Thomson’s last official mix CD, Rinse 16, saw the light of day. In that time the nebulous scene of which he is a central part hasn’t really progressed all that much. Sure, new music has emerged from labels like Night Slugs, Hemlock and the Thomson co-run Hessle Audio, much of it brilliant, and fatuous comparisons to dubstep seem, thankfully, to be less in vogue than ever. But the basic coordinates feel the same, the gradual merger with the international house and techno community more or less entrenched, the stylistic reference points largely familiar.

As such it seems increasingly unhelpful to see Thomson as the figurehead of a scene, his selections demarcating its boundaries. Better, surely, to view him as a dazzling but singular talent: somebody whose distinctive aesthetic and exceptional technique sets him apart from the surroundings that spawned him. Perhaps it’s no surprise that he chose Optimo to join him at the recent launch for Fabriclive 67; the Glaswegian selectors are living proof that, while pure-DJs may not have a discography to fall back on, their rootlessness can be their strength.

Thomson’s basic methodology hasn’t changed all that much since the Rinse mix – after all, why mess with a winning formula? The lesser-known house and techno records spanning continents and decades are present and correct, as are contemporary productions from Hessle-affiliated and like-minded contemporary artists. Tracks are blended with an ear for their singular characteristics beyond tempo and beat-pattern – supported, of course, by that fabled razor-sharp technique on the ones and twos.

Still, Fabriclive 67 feels more ambitious, more far-reaching than its predecessor – perhaps in response to its more prominent platform. Even more so than Rinse 16 this mix covers an extraordinary amount of ground, cramming vast quantities of superficially disparate material into its 70-odd minute runtime. Perhaps the closest thing to a single unifying theme is a certain rough-edged quality, reflecting the fetish for the raw currently thriving in many sectors of the underground: spartan drum tracks recur, from Chicago Skyway’s ‘It’s OK’ to the incendiary double-header of Hawtin’s ‘Ping’ and Shake’s remix of ‘Bout Ready To Jak’ by Osborne. But that’s by no means the only narrative going on here, and Thomson’s structuring feels vaguely sectional: unified clusters of material, bound together by a common thread, are interspersed with moments of disruption or carefully selected palette cleansers.

As such, there are jarring points. K Hand’s rambunctious ‘Project 5 (Untitled B1)’, in giving way to the gauzy Chain Reaction dub of Fluxion’s ‘Pendulous’, makes for a quite brazen stymying of momentum. Pearson Sound’s ‘Clutch’ doesn’t sit all that comfortably between more straightforward offerings from Lowtec and Mr Fingers (although its stop-start brilliance is, by nature, likely to break up any mix it graces). And when a track from Artwork’s house-leaning Grain project is wheeled back into the desolate industrial thud of Bandshell’s ‘Perc’, it’s hard not to get the sense that a reset button has been pushed.

But Thomson gets away with these mild non-sequiturs because he executes them with such surety, and each time your trust is rewarded with a fresh tack and a renewed sense of purpose. This mix dazzles in chunks. An example: the woozy lead lines of Minimal Man’s ‘Consexual’ – hypnagogia avant la lettre – are presented as a long-lost cousin to those of Jam City, to spine-tingling effect; ‘Club Thanz’’s whispered metallic vocals are then paired with the robotic speech in Herbert’s ‘Take Me Back’, the latter teased with fiendish subtlety. Elsewhere, Shackleton’s Kasai All Stars remix and Kero and Kyle Hall’s gloriously weird acid dubscape ‘Zug Island’ plunge us briefly, thrillingly into blackened dub-space, while Bandshell, Blawan and Pangea’s contributions are shot through with a single druggy, rhythmic drone that worms its way painfully into the nervous system.

Different mini-suites, surprising new transversal connections, will leap out with each listen. Such a dense construction, though, does require an element of commitment on the listener’s part. Fabriclive 67 can be a draining experience, and it’s not exactly background mood-music material. Surely, though, that’s a good thing. 70 minutes, in less skilled hands, can feel like precious little time to make a statement. Thomson’s manifesto is articulate, incisive and practically book-length.