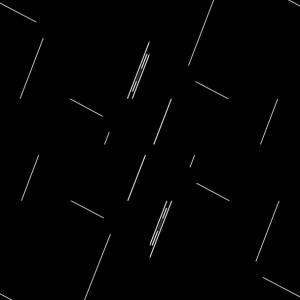 Perhaps somewhere in Los Angeles Nosaj Thing’s unreleased music is being pumped out of speakers as part of the city’s beat-production scene; sparse, short, heavy blocks of melodic sound reminiscent of his attention-grabbing debut album Drift. This, however, is not Home. As its title suggests, and as it quickly becomes apparent, his second album is more introverted music; if ‘abstract’ were a way to describe Nosaj Thing’s sound in 2009, ‘impressionistic’ would be far more suited for the beginning of 2013.

Titular track ‘Home’ starts strong, walking a route of delicate Fridge-like percussive loops, thick granular voice drones and hazy pads, but the album’s resolute attachment to these same kinds of instrumentation becomes quite homogenous by the end. A soft, but loudly compressed production palette, washed with long reverbs and delay emphasises the effect, but most saturating is a tendency to fill out pretty much all of the midrange and stereo field with harmony.

All the tracks here contain this, sometimes to its detriment. The guest vocals from Kazu Makino in ‘Eclipse / Blue’ may be sweet, with trance rave saws slicing nicely through them, but any dramatic effect caused by these two parts interacting in a space is let down by guitar filling out underneath. Similarly ‘Safe’ and the Toro y Moi-guesting ‘Try’ become largely featureless clouds of pads, whereas drum and bass-tempo finale ‘Light 3’, stuffed with pitched-up microbeats and sharp synth points, is tempered by the choice to use reversed piano as the dominant voice.

Home’s strongest material is therefore the more brazen, possessing enough spiky spin-off material to stand out. ‘Glue’ bounds in and upsets things for the better, a filtered and delayed harmony quickly stepping and bouncing around like a wetter Jimmy Edgar. ‘Distance’ continues the run at a canter, slow and Flying Lotus-like in its use of space and small, squeaky details.

‘Tell’ revisits a brasher lead of the kind found in Drift’s ‘1685 / Bach’, and by this point in the album its harsher tone is particularly welcome. ‘Snap’ stomps and crunches with complimentary hooks a little similar to Ratatat, while on ‘Phase III’ mosquito synths shoot around a beat that stumbles gracefully all over the place.

Essentially, if you enjoyed ‘Us’ from Drift, Home is 40 minutes of similar material. Nosaj Thing’s sound is still full of interesting details, but these are now lacking attention as he makes a possibly-conscious shift from ‘beat producer’ to ‘electronic song writer’. It seems a shame to criticise a creative direction like this, especially as it is quite simply a version of every music critic’s favourite cliché, ‘overproduced’ bands losing their ‘edge’. However, overall, Home seems a little too…settled.