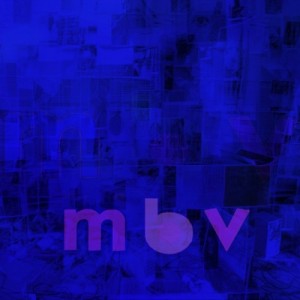 You could spend years speculating on what this music means. And it’s highly probable that it means nothing. Either in the sense that nothingness itself was the desired effect, or in the sense that Kevin Shields’ vision for My Bloody Valentine was for a purely sensory music – a music without cerebral meaning. His retort to the cult of content that was the wordy days of post-Smiths’ indie. But fuck that and fuck Shields, who right now is doubtlessly rolling his eyes at the wave of wildly interpretive reviewing – just because a piece of art wasn’t supposed to ‘mean’ something, doesn’t mean it doesn’t. In the end this is fan music, and this a fan review, and the only currency of fandom is total immersion.

It’s Slint’s Brian McMahan screaming ‘I miss you” as the sky is falling and the world around him collapses. It’s Jeff Buckley’s concluding ‘hallelujah’, final and held long enough that the very eminence of divinity ribbons from its vapour. It’s Bernard Sumner’s synths on ‘Atmosphere’, shot high across the night-sky over Ian Curtis – the self deleting man, all disappearing fight, self-eulogizing with a final backwards look and the last word on what it is to be one of the “the eternal’, the incurable depressed.

And yes, it’s Kevin Shields, My Bloody Valentine and Loveless, and what was the new psychedelia of oblivion. True beauty in music, those something-from-nothing miracles, is rare: what happens when, for one brief moment in time, the artist holds in their hand a meta-physical something – call it truth, a self-realisation, the essence of the era, Buckley’s ‘grace’ or even the very dimensions of their soul. Until, just like that, it’s gone. And in the way that nothing permanent can be ever be beautiful, it’s as much the ephemeral and one-off nature of these moments that makes them beautiful. The same applies to the greater context that contains that moment – whether that’s a song or an album or the mayfly life-cycle of a once great band.

So it’s perhaps precisely there, in the past, that these moment should remain. If the epidemic of reforming heritage acts is proof of anything, it’s that magic dies when re-contextualised. No longer mythical or timeless, now mundanely terrestrial for having reincarnated, suddenly these bands are real again, adding to their sound and changing their story whereas before they were preserved in perfection, inalterable and eternal, like a memory of some perfect day when you were a teenager.

In MBV’s case it’s especially vital, if primarily on a meta/poetic level, that their long ago moment of true beauty be preserved. A comeback album can serve to corrupt the one-time perfect idea of any band, but in the case of MBV’s it could destroy it, as their particular genius was to create a sound that was in itself a teen memory. If, as they say, youth is beauty and beauty youth, then Loveless was music’s most beautiful: the very stuff of youth, in its diffuse imperfection and volatile fragility, or in the line it drew connecting rave’s chemical euphoria and the hormonal rush of a teen crush, its re-imagining of ecstasy’s asexual high as the androgyny of early sexuality. For 22 years, its mythical follow-up was just that – a myth. We conceived of it on a mythical level. How could the reality ever compete?

And if it turned out m b v was indeed, just OK, would that not still be a disastrous blot on the band’s aesthetic, being that youth was many things but never mediocre? And how do you reproduce youth’s spontaneity or naturalism, happenstance or virginal inspirations, with what by definition is an exercise in recurrence – and by extension contrivance? On m b v, the last auteur of guitar music returns to the unfuckwithable, amidst fears that he’ll tarnish the aesthetic, Phantom Menace-like. Retroactively dumping on his late ’80s / early ’90s catalogue. And then there’s the other hitch: the expectations on him to change music again. In the end, neither of these scenarios are the case.

Firstly, the ‘changing music’ angle. No matter how radically adventurous Shields had been in his approach, m b v was never going to have the game-changing significance of its predecessors. A ‘shock of the new’ of that same magnitude is impossible today: a thing, quite fittingly, of the past, of pop music’s own adolescence. Where once there was one, now there are many, in this proliferated net age. Nowadays, true originality, the truly unprecedented, comes often and on a micro level, in the form of infinitesimal modifications, which hold a proportionately micro significance for music. So that’s that.

And as for the great tarnishing… Well, on one hand, nothing lasts forever. There are fewer hooks than before. And the influence of ’60s psychedelia is less apparent. And while once they were pop, their sound is now closer to rock. And yeah, it’s not without its innovations, even if they work more to widen the scope of the aesthetic than move it forwards.

Otherwise, with m b v it’s as if My Bloody Valentine have done the impossible, reversed the irreversible. It’s as if they’ve recaptured innocence. It’s the only way to describe what you feel had to have happened in order for the band to preserve the very essence of what was the music of their youth, in such a way that goes beyond replication. So un-self conscious and plain true is the rendering that it’s as if they unlearned those 22 years in order to feel how it was the first time; the final outcome is a peerlessly vivid depiction of an era MBV were integral in defining.

The nostalgia hit is almost dislocating. The very first note you hear – a tremolo-feint aimed downwards, into some lagoon of suede tenderness – feels just like falling: falling back through the years, into your youth. Where you eventually land is a sound hatched somewhere beyond personal nostalgia – an objective rendering: everyone’s youth. And it’s all there, contained in the guitar’s fuzz drone: at once lustrous and unfinished, like the sound of unrefined passion, while hyper-tactile in texture, evocative of a heightened sensitivity to the world. A delicate vulnerability to newness – first touches and first kisses, heartbreak and wonder – which is then caressed by Shields’ vocals; timid but exploratory, all tentative flirtations and questioning inflection.

A lesser album intro might milk a portentous guitar intro, either for the sake of gravitas or a big entrance. On ‘She Found Now’, however, Shields’ first words interrupt the natural order of things, clipping the guitar’s scene-setting process after only five seconds. Out of place and out of time, the vocal intervention serves to knocks the song out of kilter but in tune with the rhythms of life before adulthood’s structure, a time when spontaneity, impatience and imperfection were the laws of motion. In another way, the effect is akin to entering into the middle of a conversation, as if Shields is answering a question asked 22 years ago. It affords the song a kind of ephemeral momentum, in that it’s already moving by the time we arrive. There’s no beginning to it, in a similar way to how m b v‘s track titles evoke unfinished sentences.

‘Who Sees You’ is the most quintessentially Loveless track on the album. The reference is roughly that album’s ‘I Only Said’, only ‘Who Sees You’ is far slower, less busy – reoccurring detail like ‘I Only Said’s guitar refrain is absent – and also less sharp, in that like it’s strikingly low-end, any possible definition blunted by the swampy bass-tones. But otherwise, with its diaphanous vocals, tremolo guitar and seasick drone, it’s pure Loveless, nestled between crestfallen and wonderstruck. ‘Is This and Yes’, meanwhile, is MBV stripped right back, consisting only of Belinda Butcher’s wordless vocals and an organ. The sudden void of intensity is a striking effect, but if you factor in the organ’s toy-like, marginally uncanny quality alongside Butcher’s little-girl cooing, the picture formed is one of shy strangeness; the tender alienation as felt in nascent teenhood, Butcher’s indecipherable vowels suggestive of a privateness, or perhaps an inability to communicate.

If you take away the drums and gently rasping guitar, ‘If I Am’ isn’t all that dissimilar, unfurled at a serene pace and somewhat absent-minded. When you add the guitar swoon and a hint of Air’s autoerotic sensuality, however, it’s basically a quintessential dream-pop ballad: to this day a never-bettered model for the expression of blissful naivety – capturing the psychology of teen dreaming as never before. The second track making up this mid-album intermission is ‘New You’, employing a slightly obvious mix of the band’s signature Byrdsian psychedelia and Stereolab. It’s m b v‘s least interesting track but the prelude to its most fascinating; a closing trio of drum-centric tracks that take the MBV sound in new directions, albeit subtly.

Ushered in on bagpipes, ‘In Another Way’ features bouts of Swans-like grind. It’s the most ‘noise-rock’ the band’s sounded since Isn’t Anything. The synths are similarly surprising. Icy, clean and arch, they’re more akin to Sheffield synth-pop than any electronica from the shoegaze canon. But it’s the drums that are crucial. Played live, yet vaguely autonomic, the speed-garage-paced breakbeats push the band into a new bracket; the actualization of what before was only an idealogical connection to rave – albeit one knocked vaguely out of synch by Shield’s verging-on-arrhythmic guitar. Next up is the instrumental ‘Nothing Is’, another subtle evolution for the band showcasing a different mode of psychedelia: an experiment you sense took its lead from the frenetic drum patterns.

Traditionally speaking, the band’s method for trancing you out was to use a kind of continuousness – the ‘Venus In Furs’ approach. It’s mind-altering in the same way boredom can be, a good analogy for the effect being Jah Wobble’s description of listening to dub: “It’s like if you stare at a white wall for five minutes. After a while shapes will appear on it”. m b v‘s last three tracks, however, employ the other kind of drone: the Reich-ian pulse variety, based on quick repetition. It induces a totally different kind of trance – hypnotic in nature as opposed to hallucinogenic; a tenser, more lucid effect that John Cale once described as a state of ‘hyper-alert oblivion’.

With Shields perhaps emboldened by Animal Collective’s techno-psyche hybrids, closer ‘Wonder 2’ is a thing of well, wonder: a jungle track that sounds simultaneously like a shoegaze song (or vice versa). Not only is it a first for MBV, the resulting sound is a first for music. The two styles together could have been a jarring experimental disaster, if not for some beautifully judged volume-mixing which merges the genres into one seamless blur. With guitar-phaser warping doppler-like below, the ring of jungle’s beat-accents pierce a super-layered mist of shoegaze beauty, until a monstrous guitar sound consolidates the marriage of genres, uniting the entire song under a blanketing groan of elephantine thunder. It’s a reminder that still, after all these years, there are certain things only Shields can do with a guitar.