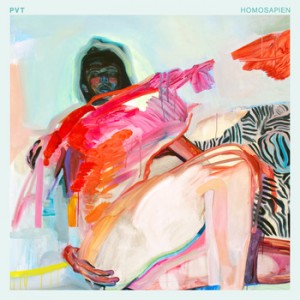 As a band incorporating electronic instruments and production techniques, PVT seem very modest: earnest and understated, but very adept. Indeed, not only are they as good as song writing, but are actually far more accomplished at integrating technology as an intrinsic element than many more successful outfits, doing so with intriguing, individual results (this is probably what led to Brian Eno inviting them to perform at Luminous Festival).

On their fourth album, Homosapien, much of the sound from last album Church With No Magic remains; when most ‘band-like’, the result is somewhere between Radiohead, Black Dice, Queens of the Stone Age and early Muse. Title track ‘Homosapien’ hammers out a strong mixture of processed vocals and guitars, live drum kit and additional samples, while ‘Casual Success’ takes a heavy fuzz bass guitar and applies it to fleeting synth hooks, complex layers of percussion and Thom Yorke-like vocal harmonies.

The electronic layers have changed somewhat, however. There’s a certain purposeful naivety in the way synths and drum machines are employed: a lot of minimally altered base tones (sawtooth, pulse and square, etc.) providing harmony, recognisable drum machines providing skeletal frames. When stripping things to a more functional level this makes sense, but it’s difficult to ignore the feeling that some of Church‘s energy has left with it.

Choices of rhythm are occasionally offset by weaker moments while attempting to add drama, such as the cymbal heavy breakdown of ‘Cold Romance’ and the somewhat leaden thump of the chorus in ‘Vertigo’. Some songs are also let down by slightly embarrassing lyrics: ‘Vertigo’ and ‘Electric’ could benefit from being more instrumental, like delicate closing track ‘Ziggurat’, or less discernable, like ‘Shiver’, the vocals of which are delivered entirely through a harmoniser.

Homosapien, it turns out, enlists the services of engineers Ivan Vizintin and Ben Hillier (Depeche Mode, Blur), which explains the slight shift in approach. With this there is, of course, some solid new territory explored. ‘Nightfall’ is a notably strange, lovely song, pulsewave arpeggios rising and falling like micro-sized 12-bar blues, a romantic surfing-by-night atmosphere. PVT are good at executing this kind of style: both ‘Evolution’ and ‘Love & Defeat’s West Coast white boogie-influenced basslines complimenting an ’80s delivery of the vocals. The falsetto melody of ‘New Morning’, reminiscent of Blondie’s ‘Rapture’, is also another great touch.

However, where bands like Radiohead, Hot Chip, Battles, Yeasayer and even Keane have utilised such technicians to capture an overall sound that is immediately recognisable, an updated signature isn’t quite settled upon on Homosapien, instead skirting the edges of what PVT had originally (and very successfully, to this reviewer) set up. It puts them in slightly odd territory by comparison, and probably within the old music hack’s favourite cliché of ‘Difficult Second Album’. Overall, Homosapien doesn’t possess quite the same spirit as Church With No Magic but is certainly a surefooted step somewhere. We just don’t quite know where yet.