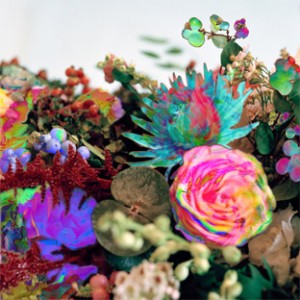 Although it inspires a collective rolling of the eyes at the slightest mention, the event of post-dubstep has shown up some very interesting musical metamorphoses. Artists may have scorned its associations but have also thrived from it, enjoying their roles as experimenters within a narrative that sees a continuous shifting of perspectives and styles that precious few could have foreseen. Whilst it’s easy to dismiss post-dubstep as a irreverent tag, what makes it a dialogue worth having is a desire for context in what has become a scene with no set geographical location, isolated figureheads or immediately identifiable aesthetic. This sonic diaspora is constantly taking tentative leaps of faith out into the ether, and one of the finest examples of this sphere’s forward-thinking urge is Darkstar.

When Darkstar scrapped their first LP weeks before debuting their live show the risks were glaring, but that risk produced North, a gorgeous collection of synth-pop that lifted the low-level frequencies of previous work towards something more subtle and melancholy. The whole process was hugely aided by the addition of James Buttery, whose vocal talents rounded off the production with a finesse that suited this new creative direction beautifully. Now, on their second LP News From Nowhere, Darkstar’s investment in Buttery’s voice is overt. Almost totally departed from the glitchier elements that underlined North‘s bleakness, News From Nowhere is a glittering journey that sees the trio explore the use of voice-as-instrument within an LP of precious little rhythm – on the surface, at least – and weaves an intricate and at turns surprising narrative out of the gentlest of movements.

Firstly, the arrangement of the LP is excellent. Producing a near beatless pop album sounds borderline oxymoronic, so it’s to Darkstar’s absolute credit that the full listen is as engaging as it is. This sense of engagement feels largely invested in Darkstar’s ability to make Buttery part of natural fold of the LP rather than as a separate front-man, and it all comes across remarkably well. As opener ‘Light Body Clock Starter’ unfurls from the shadow of North and the tinkers and chimes of ‘Timeaway’ pull Buttery’s vocals into the light it becomes clear that the LP is bound by his wilting falsetto; making the transition from nonchalant saturation on ‘Young Hearts’ to the giddy and playful reaches of ‘Amplified Ease’, and a melancholic pop sentiment akin to Matthew Dear on’You Don’t Need A Weatherman’, with ease. Closer ‘>Hold Me Down’ sees the subtle layering of tinkering percussion at its most beautiful, toy-like keys and treated vocal repetitions tumbling with a poignant deftness.

This is where my only reservation with the LP comes in. Although Darkstar have enjoyed one of the most rewarding metamorphoses within this aforementioned diaspora, News From Nowhere marks a far more dramatic turn for them than North did in 2010. In this new leap into the ether it’s possible that they may find themselves going through a second wave of unwanted generic identification towards the indie-pop realms of Animal Collective and Grizzly Bear – acts which I cannot help but see hints of now – and a restlessness of identity that may come to undermine future work. Time will tell if this can continue to work to their advantage or not but so far, it’s been a delight to witness.