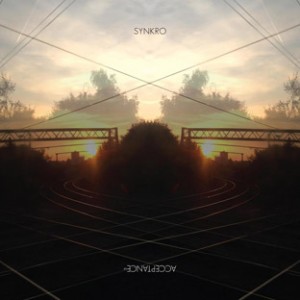 When signing to R&S’s ambient-leaning sister label Apollo last year, Mancunian producer a.k.a. Synkro took the warm and emotive textures that developed over his time making a variety of garage / dubstep / d’n’b-inspired beats and placed them unashamedly at the forefront of his tunes. Though appropriate for his newfound home, his more introspective production on the Broken Promises EP was sometimes too saccharine to swallow; its brazen sentimentality often sounded pre-packaged. While his healthy fanbase would certainly argue otherwise, it was a shame, really. His obvious and consistent dexterity for creating rich synth sounds and crisp percussion seemed neglected in the EP’s overly smooth and clean context.

Things are a little more promising on his follow-up for Apollo, Acceptance, however. While not displaying a radical departure in style — far from it, in fact — Synkro’s arrangements and sound palette show real progression and artistic maturity in comparison to his last effort. The reverb-drenched pads and choral washes, which tended to fade from memory too soon after listening to Broken Promises, are much more enveloping and lasting on Acceptance’s title track, the low-end even more penetrative and deep. Driven by a jittery autonomic kick-kick-clunk, ‘Acceptance’ is a cold, foggy and mournful headphone jam let down only by its tumblr-friendly “I just wish that people could accept each other for what they are on the inside” refrain. Sure, it may give some meaning to an otherwise arbitrary song title, but it just sounds tired.

It’s on the more restrained tracks that Synkro really shines; the rain-soaked ‘Recognition’ takes three chords and suspends them in a lucid dreamscape for three breathtaking minutes, as ethereal vocals and a one-off Blade Runner sample from that scene surface at just the right moment. Countless bedroom producers have tried to create a similar mood, but few can hold a candle to Synkro in managing to achieve it without sounding like a cheap clone of you know who. Likewise on the breathy and gaseous ‘Illumination’, in which an infectious and bouncy half-step beat lumbers along throughout, McBride’s arrangements are subtle but effective. A melody reminiscent of the jingles in Japanese train stations creeps in every so often but other than that the track is just exceptionally crafted atmosphere and sporadic gloopy stabs. Operating like this Synkro manages to immerse the listener without ever sounding like a contrived electronic ambient artist — the kind who make tunes exclusively for Youtube videos of brunettes in fields — and it’s here that Acceptance succeeds where Broken Promises didn’t.

Elsewhere things aren’t so positive however. Like many electronic producers’ forays into “organic” territory, McBride’s use of acoustic guitar on ‘Disappear’ and the Indigo-featuring ‘Mutual Divide’ sounds dated. That’s not to say he should be discouraged from utilising non-electronic instruments in his future work — on ‘Spirals’ a guitar is put to more effective use as a choppy loop over a skippy half-step kick-clap beat, punctuated by a sub-bass throb and bubblegum vocal stabs. Again, its restraint proves to be the winning factor.

Ultimately, while being patchy in places, Synkro displays a lot of potential on Acceptance. His individual textures sound more refined and engrossing than ever, while, at the EP’s high points, the producer’s arrangements are affecting and enduring. Though a sizeable portion of the release will undoubtedly fade away with the washes of reverb, what remains is worth an intensive listen and is more than enough to be optimistic about Synkro’s future output.