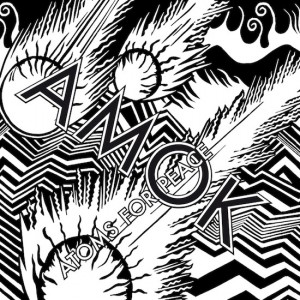 Thom Yorke’s love affair with dance music is well-documented. Of course, ever since Kid A‘s radical rejection of guitar band conventions, the electronic has played a key role in Radiohead’s success. But in recent years Yorke seems to have found rejuvenation in the post-dubstep, post-everything tangle of the contemporary dancefloor. In the wake of the last Radiohead album, 2011‘s The King Of Limbs, the band commissioned remixes from Shed, Pearson Sound and others, while playlists posted on the Radiohead site frequently shine a spotlight on quiet corners of the dance underground. Yorke has even (allegedly) tried his hand at club fodder, of a sort.

Still, as that Sbtrkt remix indicates, Yorke’s success in this arena lies, as it always has, in how imperfectly he processes his influences. Whether by accident or design, his music tends to function as a sort of failed transfiguration into something else, a one-sided love-letter to a style – house, say – whose various tics and habits are intractably Yorke. The bedroom IDM of 2006‘s The Eraser, the artist’s first solo record, bordered on the naive at points, its sparse, loop-led arrangements pivoting between strikingly minimal and simply underdeveloped. And for every slice of laptop pop brilliance (‘Black Swan’) there was a moment where the lack of a band’s in-built self-censoring mechanisms was painfully apparent (‘Skip Divided’).

AMOK is essentially the followup to that record, though Yorke this time presents himself as the frontman of a quintet. Atoms for Peace features the Red Hot Chili Peppers’ Flea on bass, long-term Radiohead producer Nigel Godrich on synths, and Mauro Refosco and Joey Waronker contributing percussion. But Yorke is clearly the creative motor, guided, as always, by Godrich’s producerly nous. The fact that this record is far denser and subtler than its predecessor is likely down to the method behind its creation: audio was generated during an intensive three-day recording session, before being picked apart and massaged back into shape in the studio by Yorke and Godrich. It’s an attractive approach, having less to do with the highly involved cut-and-splice conventions of modern computer music than with the techniques employed by the disco remixers of old.

Rather than loops, processing and the vertical stacking of tracks, then, this careful manipulation of pre-existing parts invites considerations of arrangement, interaction, subtraction. As such AMOK thrives on details: passing percussive flourishes, buried synth loops, an occasional quiet undergrowth of backing vocals. Refosco and Waronker’s rhythmic lattices, veering fluidly between the acoustic and the crisply digital, have a certain lilting hypnotism to them but are too unstable, too jittery to be truly propulsive. Flea’s dry, incisive bass-work has a touch of Colin Greenwood’s leftfield acrobatics about it, while Godrich’s synth lines unspool with clinical precision. Over this highly distilled backing Yorke’s singing is almost unfailingly measured, mournful but not lachrymose, his melodies stately. Occasionally he teeters on the brink of vast reverbed spaces – a Godrich trademark – but these tracks are rarely dizzying so much as quietly absorbing.

In other words, subtlety comes at the expense of bold gestures. The Eraser was frequently arresting, if not always pleasing. It also had a heady, euphoric streak, a certain intensity of feeling that made its highlights quite remarkable. AMOK, on the other hand, resists casual parsing, demanding repeated listens before its charms rise to the surface. Some tracks never yield particular rewards: ‘Unless’ falls back on a sense of baroque angst that will be very familiar to Radiohead fans, while the paranoid title track is an unsatisfying closer. But most of the others will wind their way slowly into your affections, particularly the weirdly unbalanced ‘Ingenue’, or ‘Dropped’, with its sudden unexpected blooming around the 90 second mark. AMOK isn’t quite dazzling, but it’s a clear improvement on its predecessor, and more than enough to win over old fans – and perhaps a few new ones, too.