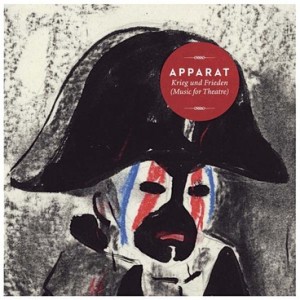 Sebastian Hartmann’s 2012 re-working of Tolstoy’s War and Peace as an experimental theatre production sounds wild; a 30 piece ensemble of performers, surreal sets and imagery from Tilo Baumgärtel and a freeform developmental process, all taking place over the course of a month in an abandoned German factory.

It makes sense then, due to his varied background, that fellow German Sascha Ring, the electronic composer Apparat, would be commissioned to work on its score. The process, being so loose, led to Ring constantly re-working parts and, not quite wanting to stop at the production’s finale, became a studio production after – an epilogue of sorts, perhaps.

As contemporary music for theatre, Krieg und Frieden (Music for Theatre) fits the expected schema solidly; themes, passages of musical narrative and soundscapes all creating spaces for dramatic scenes. These feel like they could be spaced apart in a long performance coherently too, with Ring and the ensemble (violin and cello, plus additional trombone and drums) having made many variations.

Much of the material is textural, long swathes of granular digital layers mixing with string overdubs, but where harmonic passages become melodies they are simple but boldly romantic. These are the record’s strength: ‘Blank Page’ is so beautifully cold and desolate it could soundtrack the Arctic tundra hunt at the climax ofFrankenstein; ‘Tod’ and ‘PV’ share in the similarly huge crescendos practiced by Raime; and both the string-only chorale of ‘44’ and its overwhelming computer-processed ‘Noise Version’ put the listener through an emotional wringer. As antithesis, both pointillistic versions of ‘K&F Thema’ are well conceived, spinning gently, music box-like, with some surprising details that emerge.

Other parts seem anomalous, though. Radiohead, Explosions In The Sky, Godspeed You! Black Emperor and similar all spring to mind during opener ‘Austerlitz’, an overt statement of a dramatic entry that becomes shoegaze-ish. ‘Light On’ is another oddity; high percussion gestures around a blurry mixture of wavering, Farfisa-like tones, but why Ring decided to add vocals is anyone’s guess. The English lyrics, sung in falsetto, and a dance drum beat that briefly appears both seem misguided. A similar issue arises during ‘A Violent Sky’, the imagery of the title spelled out unnecessarily through lyrics and distracting from a delicate, minimalist musical march. Perhaps a previous version worked well in the theatrical performance, but it seems out of place in the record.

This said, releasing Krieg und Frieden (Music for Theatre) as an album in its own right does make sense overall, and was worth Ring’s pursuit. Varying in density, direction and style, albeit with some less consistent territory, it’s a modest but powerful score, even when independent from its original setting.