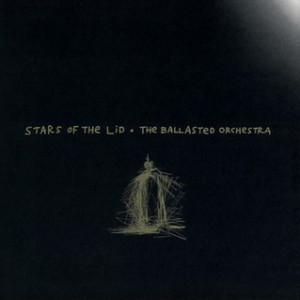 Theyʼre named for the private nebulae that erupt at the closing of an eye, so itʼs fitting that Stars of the Lidʼs music is deeply intimate. Even bearing in mind the glut of talent in contemporary classical-ambient music – take your pick from a codex that includes Marsen Jules, William Basinski, Ryan Teague, Dustin OʼHalloran, Max Richter, and Tim Hecker –the duo behind impossibly good albums like The Tired Sounds of Stars of the Lid and …And Their Refinement of the Decline are luminaries of the scene. Though you can hardly deny those albumsʼ extreme beauty and grandeur, 1997ʼs The Ballasted Orchestra, now getting the reissue treatment from Kranky, is a subtler animal, minimalist and hypnagogic rather than cinematic, but a masterpiece regardless.

Its compositions are located at the golden mean between somnolence and activity, the ideal state of pure presence made aural. Drums are wholly absent, vocals almost entirely non-existent, and melodies rare – and still you wonʼt want for anything. This is music for concentration without conscious thought, emotion without baggage. Avoiding all descriptors bar (excellent) track titles like ʻSun Drugsʼ, ʻFucked Up (3:57 AM)ʼ, and ʻMusic For Twin Peaks Episode #30ʼ, Stars of the Lid squeeze an infinitude of meaning from a limited palette: atomised tape hiss, deep plangent drones, fragile guitar warbles, and enough reverb to make Slowdive wonder if theyʼve been playing it safe all this time. Such constraints mean that even though the music can feel unpolished and raw, The Ballasted Orchestra is one of the group’s most emotionally nuanced offerings.

Effectively a continuous piece spread over two LPs, The Ballasted Orchestra is still fairly catholic. The sepulchral melodies of ʻDown IIʼ emerge from the depths, drifting among torpid drones and fading imperceptibly. ʻTapheadʼ is the closest to the later works, its stunning tremolos, puffs of breath and mammoth pulsations evoking a half-forgotten sadness, while the mesmerising molten-glass drones of ʻSun Drugsʼ bring to the surface all kinds of feelings it would be crass to try and name. The entropic, earthy (and Earth-y) drones of ʻArtificial Pine Arch Songʼ extend in a thousand directions, peppered with individual notes and brief passages that have no source and no corollary. But itʼs ʻMusic For Twin Peaks Episode #30ʼ thatʼs the centrepiece here, taking up the whole third side. (David Lynchʼs series extended to 29 episodes; who said ambient musicians canʼt have a sense of humour?) Its majestic waves of sound rise with a tidal inevitability before billowing into the ether, and opiated guitar lines crescendo and throb, their reverberations felt long after the last chord has faded away.

Played loud, the compositions are intensely vivid, intricate but never excessively arcane. At low volumes, theyʼre no less effective, cocooning you in warm soporific fuzz. Either way, The Ballasted Orchestra opens up a space where the conscious mindʼs constant jumble of meandering chatter can finally cease, and pure meditative bliss take its place.

Tags: KrankyStars of the Lid