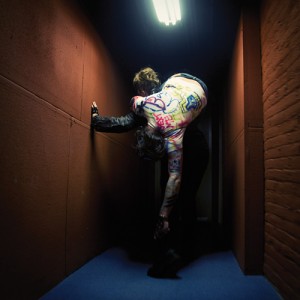 While Pete Swanson is constantly releasing material on small labels, or self-releasing CDRs, undoubtedly it is the profile of Type Records that can be attributed to wider attention he is now enjoying, via 2011’s excellent album Man With Potential and last year’s intense Pro Style EP. Discovering that his latest EP Punk Authority was to be released by Software Records was exciting news, suggesting that anything could be on the cards.

The way tracks are layered – with bass and mid generally a vortex of activity and a high-register voice and percussion jutting out above – are recognisably Swanson. The particular metallic timbres that coloured Pro Style a little more than Man With Potential – probably an imprint of his current hardware set-up – also return, giving Punk Authority the feeling that it is picking up naturally where that EP left off.

If there has been progression, it’s possibly in compacting ideas further. In opener ‘Punk Authority’ subtle melody sets up the track, lying barely audible beneath a Regis-in-a-blender pounding bass and mid-range. Everything is, however, obliterated after this brief introduction, wrapped and fighting out from under a cloak of distortion. In the final 30 seconds much of the intensity falls away, revealing morose, wailing squarewave tones that are just as interesting, although, sadly, not explored further.

Vacillating between 90 and 180 bpm, ‘C.O.P.’ is pure thrash grind, somehow capturing a retro pulp element too, a soundtrack to some kind of futuristic biker gang violence. Its lead rises and drops siren-like between octaves, and when the beat occasionally drops for filter sweep builds, the bludgeoning of distorted bass squares rebounding off each other become all the more apparent.

‘Grounds For Arrest’ stamps at an intimidating 105bpm march, high shards every first and third beat carrying a melody spread over several bars, the mid-range contorting through a counter melody subject to a lot of variations of intensity. The track starts as a maelstrom and gradually drops away to just its beat, a structure that suits its brief three-and-a-half minute length.

In closer ‘Life Ends At Thirty’, however, Swanson’s use of noise as a specific element takes an unexpected and very interesting turn. During its relentless 13-minute freefall, swathes of static and distortion create a cloud that seems to contain the other sounds: as this travels, the listener is pulled from outside and observing its movement, to entering the cloud itself and being surrounded by its fragmentary, vicious inner workings – all while in constant motion. It’s a unique experience that lends itself really well to headphone listening and, as a grand finale, could well mark the beginning of some new ideas.

Like Autechre’s ‘Ganz Graf’, Pete Swanson’s ability to choose and force elements to extremes while still retaining something that ties the whole together musically is what makes him such a strong player in the noise and industrial scene. With this in mind, Punk Authority confirms Swanson as no longer just a man with potential, but an institution in his own right.