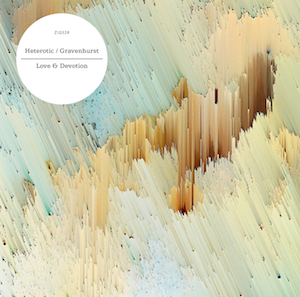 I’ll admit it: to hear that Mike Paradinas was releasing an album with his wife Lara Rix-Martin, and that Gravenhurst– a solemn, folk-like artist – was another collaborator sent my cynicism through the roof; visions of something pretty and largely formless like Nosaj Thing’s ultimately unadventurous Home. Thankfully, I was surprised and relieved to have had my disgusting personal prejudices batted away.

For those expecting material similar to Paradinas’ various forays into heavy club music, be informed that Love & Devotion is nothing like this: the album strides down the mid-point between dance and pop, overtly ’80s-inspired due to Rix-Martin’s own style, with elements of ’90s dance subtly embedded. Gravenhurst contributes to four of its eight tracks, and his voice is actually perfect to the overall sound.

As with any noticeably referential music, incorporating ‘an ’80s sound’ today carries the challenge of matching the era’s conviction, minus the big studios and budgets. The voicings and song structures may be bang on, but the overall result usually doesn’t quite come together – maybe simply due to the time that has now passed. Trying to update it gets even trickier.

Love and Devotion does have moments of this, areas where the parts don’t quite gel, and it is mainly in the instrumental tracks. While the Fleetwood Mac-like rock pulse that drops in during its latter third is inspired, ‘Knell’ comes across unsure of itself with layering of bare MIDI piano melodies and an unnecessary guitar solo. ‘Robo Corp’s sci-fi movie opener comes across more tongue-in-cheek than daunting, although its title suggests this may be intentional. Similarly, despite strong material, the Carpenter-esque ‘Fanfare’ still feels more like a sketch than a finished track.

It is instead the vocal numbers that show Heterotic at their strongest and most progressive, taking their chosen elements somewhere newer and achieving the best results. Largely instrumental opener ‘Bliss’ has a poignancy from wordless female (Rix-Martin’s?) rave vocals around a perfectly formed ’80s bassline and cruise control beat. Gravenhurst’s contributions are the highlight: while his delivery in the overtly synth-pop ‘Blue Lights’ is surprisingly Pet Shop Boys-like, and contribution to ‘Devotion’ floats effortlessly (if a little reedy), it is the touching melancholy ballad ‘Wartime’ that shows how much emotion he can bring out from the productions, in a way that genuinely provokes those skin hairs to stand on end.

‘Slumber’, however, is by far the height of the record, with all three contributors seemingly on the same wavelength, creating a dreamy result along the lines of Teengirl Fantasy. As an independently made pop album, the debut of a new project and, essentially, an experiment, Love and Devotion may have weaker moments, but is very well accomplished overall, and this song shows how it can all come together. If Heterotic can continue down this route, the group will only get better.