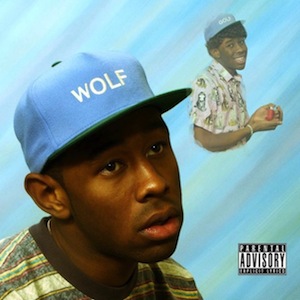 Between the release of Bastard and Goblin, Tyler, the Creator went from rapping about Cartoon Network to having a show on it. Goblin was the inevitable response to the response: “I’m not a fucking role model,” he sneered, borrowing a dog-eared page from his copy of Eminem’s playbook. He used the album to rail against pearl-clutchers in the media and his Johnny-come-lately fanbase: the forces that simultaneously made his new lifestyle possible and miserable. This is well-worn territory, and aside from a few highlights, Goblin didn’t have the vitality or shock value of Bastard — not just the shock of his psychosexual lyrics, but of his preternaturally gravelly voice and Pharrell-in-Hell beatcraft.

On Wolf, Tyler still might not have something new to say, and while he’s certainly trying, the real story of his third album is his production, which has taken an outsized step forward. He’s spent more time on the piano and less on the skateboard, and it shows: Wolf is astonishingly musical, with unexpected elements creeping up throughout, turning the songs into much more expressive compositions than the stumbling beats and repetitive lyrics would suggest.

At the end of Goblin, Tyler came to terms with the “revelation” that his pitch-shifted therapist, Wolf Haley, and his various aliases were all figments of his imagination. Rather than dispose of the narrative framing device, Tyler turns to United States of Tara for inspiration, breaking his split personality into even more shards. That’s how we come to know “Sam” and his band, who are given credit for Tyler’s newfound musicality (“do you guys like jazz?” he asks).

Like any lead track worth its weight in Supreme gear, ‘Wolf’ sets the album’s tone: a casual, half-sung chorus of fuck-yous over an orchestral backdrop. Here and elsewhere, Tyler’s nods to his influences are overt: pieces of the piano-driven funk of Andre 3000’s ‘Prototype’, a bit of N.E.R.D.’s In Search Of-era balladry, and the clunky boom-bap of indie-rap heavies MF Doom and the Def Jux stable. So while the beat and bassline of ‘Jamba’ are nothing new, those sparkling synths are. Same goes for the organs, xylophone, strings, and horns that appear throughout the album as welcome surprises.

Tyler calls on his Odd Future companions sparingly, but to great effect. On ‘Rusty’, Domo and Earl shine like the nascent stars they are, forcing Tyler to change his flow and up his game (“bitches getting touchy-feely like they reading some braille”). Frank Ocean has a notable supporting role, showing up on the outro of ‘Awkward’, on the double-time chorus of ’48’, and as a co-writer elsewhere, like on the album’s centerpiece triptych, which plays like a last-day-of-camp take on Ocean’s multipart ‘Pyramids’: the lovelorn ‘PartyIsntOver’ gives way to the simple-yet-vivid imagery of ‘Campfire’, which features a youth chorus and (inexplicably) a dulcet-toned Lætitia Sadier, before closing strong with ‘Bimmer’. Allegedly written with Justin Bieber in mind, Tyler takes some Hell Hath fury and goes widescreen on ‘Bimmer’, laying in reedy synths and Ocean’s vamping.

More impressive than Sadier’s appearance is that of Tyler’s idol, Pharrell Williams. ‘IFHY’, which he claims “isn’t a song, I just happened to rhyme when I get emo and find time to write facts,” combines a kaleidoscopic, funhouse melody with gunshot snares. Pharrell shows up with the silky cooing that put so many Neptunes/N.E.R.D. songs over the top; unfortunately, the staid love/hate lyrics prevent this one from doing the same.

Similarly, Tyler’s anti-industry, anti-dad, anti-fame, anti-everything shtick gets tired quickly. When he tries to break out of his self-imposed lyrical constraints, he aims for fictional drug dealing (’48’), violent crime sprees (‘Pigs’), and tales of obsessive fans (the ‘Stan’-ish ‘Colossus’). Which isn’t to say he isn’t evolving as a rapper: lines like “pink haired Misses, I’m her Mister, sipping slurpees, bag of chips, now show your tits for mister Fuji, take a picture” dazzle, as does his old-school storytelling on ‘Lone’, where he touchingly relates his last meeting with his late grandmother.

It is a rap album, so expect some filler: he enlists Odd Future backbenchers for a trap parody on ‘Trashwang’ and Tallulah Belle Willis (spawn of Bruce and Demi) for a MIA-hollering hook on the vaguely exotic ‘Tamale’. But don’t skip over ‘Treehome95’, a jazzy, neo-soul outlier that confoundingly features Erykah Badu and Quadron’s Coco O: here’s another vote for Tyler to trade in the mic for the keyboard, full-time.

With Wolf, Tyler, the Creator is exciting again: maybe not as the ringleader of the Odd Future empire, but as a producer who just turned 22 (did you forget how young he actually is?), has internalized a decade of Neptunes/Doom/Def Jux production, and has Pharrell, Erykah, and (most importantly) Frank Ocean on speed dial. The don’t-give-a-fuck attitude might have run its course lyrically, but when applying it as a production ethos, Tyler is just getting started.