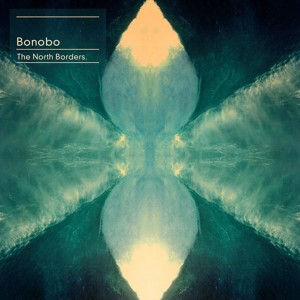 If “slow and steady wins the race” is indeed a truism, then Bonobo’s fifth LP in nearly fifteen years The North Borders is an model illustration of it. After the hearty reception to his last LP – 2010’s Black Sands – The North Borders sees the confidence and scope of his sound blossom; tracks unfolding in ornate, colourful flourishes to reveal an attuned sensibility for orchestral grooves and delicate textures, as strands of garage, house and trip-hop are woven into ripe, expertly crafted progressions of down-tempo electronica.

The bedrock of The North Borders is an acute sense of linearity. Third track ‘Cirrus’, one of the LP’s crowning glories, is a charming and hypnotic composition that intersperses a four-to-the-floor, metronomic tempo with a glittering display of chimes and gentle, hollow ticks of percussion to create the kind of track that Four Tet so specialises in. Little is used for greater effect, and maintains a dynamic that allows each element to float gently in and out of the foreground rather than competing for attention. ‘Cirrus’ is a real accomplishment for Bonobo, and the quietly confident, spirited timbre it sets for The North Borders goes onto yield some really great results. The harp gives Erykah Badu’s by turns sonorous and sultry timbre an ethereal quality on ‘Heaven For The Sinner’, which is contrasted well against Cornelia’s child-like lullaby on ‘Pieces’ and Grey Reverend on ‘First Fire’, both appearances having their own merits and flaws.

Though the production is well crafted and the vocalists suited to each track, ‘Pieces’ and ‘First Fire’, after repeated listens, sound like lost sessions from trip-hop outfit Lamb and post-dubstep darlings SBTRKT respectively, and the overall effect is one of an unfortunate deja vu that rarely enters Bonobo’s catalogue. Where Bonobo uses vocals best on The North Borders though, is in his sampling. ‘Emkay’ works that minor key sound palette to the bone as woodwind enriches what a heavier drum pattern would have otherwise drowned out, and the Nosaj Thing-leaning ‘Sapphire’ shows Bonobo’s acute sense of craftsmanship as harp strings are plucked to stirring, robust effect.

This curve into a more hip-hop element is further played out on the crunching, lackadaisical percussion of ‘Jets’ and on the skittish keys and woodwind melody of ‘Antennae’, which are both held together with a gentle pulse of bass that gives them just enough of a push to keep everything rolling along nicely. Basslines are pulled forward more overtly on ‘Transits’ and ‘Know You’ – products of pensive, garage soundtracked night bus journeys – and also on ‘Don’t Wait’, where pitched vocal hums vibrate against chimes, maracas and the slightest of down-tempo piano stabs with a tangible tactility. Whilst The North Borders is hardly a stylistic leap of faith into the unknown there’s definitely a more confident and varied use of textures and instrumentation than on Black Sands, and it marks a new, very much worthwhile chapter in Bonobo’s continuing story.