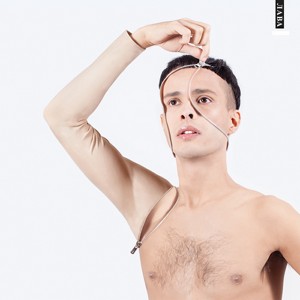 Smother the human. So goes the unofficial maxim of the recent wave of web-savvy, post-everything producers. See LOL Boys’ ‘the memes have taken over the asylum’ aesthetic, or 5kinandbone5′ masked Pen And Pixel cover art, or the way DJ Haus hides, Wizard Of Oz-style, behind dancing aliens and psychotropic Eurotrash cribbed from YouTube. Nguzunguzu, DJ Sliink, Dreams Ltd., Massacooramaan – unless you hunt down press shots, the music is deliberately – and, in the case of Lil Internet’s Twitter backdrop, very literally – faceless. The artist’s voice is replaced by something bigger and blander – the chirrup of aggregators, the harmonics of data-flow.

Not so with Brooklyn’s Slava. Musically, he’s in a similar ballpark to the above, turning out a ludic synthesis of footwork, 2-step, house and chart-pop. Unlike his peers, though, he puts himself front and centre. The cover of Raw Solutions shows a topless Slava, caked in make up, artfully unzipping a skin-coloured suit. Slava The Man also features heavily in the press materials, too: the press blurb paints a picture of a Russian emigree infatuated with Freddie Mercury, of an “enigmatic” figure stalking the peripheries of the Brooklyn party scene. Software’s wager seems to be that Raw Solutions is a old-fashioned artist album, crafted in the image of its charismatic maker. As it happens, it’s a pitch that pays off.

It’s worth stressing from the outset that Slava’s scribbling in the rulebook rather than ripping it up. Nothing here crackles with the shock of the new: ‘Crazy About You’ continues footwork’s quiet crush on hardcore and jungle; ‘Hold On’ is glistening beat music from the Numbers textbook; 2-step shuffler ‘Girl Like Me’ isn’t so different from Shlohmo, Ryan Hemsworth or any of the other dudes with ludes. Still, caveat aside, there’s an obvious musicality on display that elevates Slava above his contemporaries. In ways that are subtle and unexpected, Raw Solutions makes tired tropes feel fresh and exciting.

Much of this character comes from Raw Solutions winning scrappiness. Slava, like the best footwork producers, wears his amateurishness on his sleeve, finding beauty in rough cuts or botched edits. The bulk of Raw Solutions was cobbled together in single takes on a Korg Electribe ESX, and it shows. ‘Doit’ is an on-the-fly ghetto house experiment, full of lurching tempo shifts and scattershot vocal samples. ‘Werk’, meanwhile, is ballroom house as produced and mixed by DJ Rashad.  The sampling is also totally unfussy: ‘I Know’ cribs from Britney Spears’ ‘I’m A Slave 4 U’, and ‘Heartbroken’ fleeces the hook from T2’s 2007 bassline smash of the same name – exotic, perhaps, for a Stateside listener, but pretty trashy for any UK resident born before 1996. Raw Solutions isn’t as gimcrack as, say, Ital, but there’s a homespun quality that gives these tracks something severely lacking in a lot of comparable works.

Scruffier, then, but also steelier. Soft Control, last year’s exceptional EP-length debut for Software, offered saccharine footwork spotted with pillow-talk – less erks and ghosts, more coos and Freudian slips. It was music to steep in; listening was like easing into a tub of asses’ milk. Raw Solutions, by contrast, is full of sharp edges. ‘How U Get That’ plays like a brittle high-speed version of Young Chop’s low-spec pomp. ‘On Its’, meanwhile, is a mess of strafing lasers and timestretched vocals. Soft Control‘s sugar-rush (see ‘I Know’ and ‘Girl Like Me’) is still present and correct, but, for the most part, Raw Solutions is his harshest offering to date, and the newfound tuffness suits him well.

One of the interesting ironies about Slava is that, when he’s not making records like Raw Solutions, he’s a paid-up cheerleader for the New Digital Future brigade . As a designer, he innovated “augmented reality sculpture” The Digit – a mutant two-headed thumb leering out of a seapunk lagoon – and built immersive 3D web platform (read: Nathan Barely fever dream) Gifpumper. Strange then, that he’s able to make overcooked blog-friendly schtick feel so enormously human. It’s all there in the title – Raw Solutions is spirited, fiercely effective club music with nothing to hide.