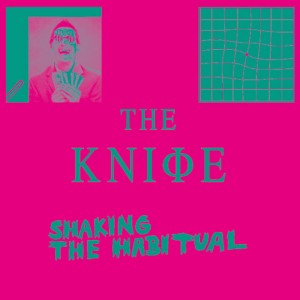 Only a few bars into Shaking the Habitual’s opening track ‘A Tooth For an Eye’, it becomes clear that The Knife have no intention of holding your hand. Instead, they grab you by the throat, stacking vivid, clashing polyrhythms and gamelan gongs on top of the initial wicked bassline and ugly snares. Karen Dreijer Andersson’s voice is a strained howl that’s closer to an instrument than a vocal. It’s barely foregrounded, and so many discordant elements are high up in the mix that they jostle for your attention. It’s an appropriately confrontational opener for The Knife’s best – and most jarring – record to date.

Karen Dreijer Andersson and Olof Dreijer penned the manifesto that accompanies Shaking the Habitual. As such, it’s worth quoting at length:

“…there’s something phlegmatic about the world state don’t you think?
There’s a blood system promoting biology as destiny.
A series of patriarchies…
What about hyper-capitalism, this homicidal class system…
Monsanto, fracking and “terminator seeds.”…
The ocean is twice its original size… We take a heap of oestrogen…
No habits!”

Modern society’s three principal threats – environmental collapse, patriarchal exploitation and unjust capitalism – are the stuff of The Knife’s least pop record to date. The tracks often feel more like meditations or dirges than songs, closer to Olof’s techno side-project Oni Ayhun than Karin’s Fever Ray moniker. Fans of Silent Shout and Deep Cuts, intricate pop albums in their own right but bubblegum by comparison, will find Shaking the Habitual’s hybrid of post-punk, techno, industrial, coldwave, drone and electro-pop discomfiting. And that’s exactly the point. If you’d like The Knife 2.0, you should look elsewhere.

A good deal of Shaking the Habitual’s unheimlich disruptiveness stems from never quite knowing what it is you’re hearing. The manifesto offers some insight: “Electronic is just one place in the body. We went temporarily acoustic. We made our own instruments. We took an old bedspring, a microphone and… Now we’re bending our voices.” That blurred distinction between organic and mechanised underlies ‘Fracking Fluid Injection’. Dreijer Andersson’s contorts her chameleon voice into strange new shapes; it sounds as though it’s been broken down into component parts and put back together wrongly. That isn’t simply a point of sonic interest, but central to a narrative in which a lone voice struggles to be heard in the morass. Oblique drones and what could be (but isn’t) a zither bowed with a file echo dismally. The grubby splintered sounds feel like they’ve been excavated rather than created, so that the subtractive act of musical production is eerily analogous to the industrial hydraulic fracturing process.

Ecological destruction also dominates the twenty-minute (!) drone piece at Shaking the Habitual’s centre, ‘Old Dreams Waiting To Be Realised’. Its tones range from high-pitched Tibetan singing-bowl peals to ballasted drone and abrasive grind. Percussion spirals and skitters, and great muffled crashes punctuate the drone, as if great hunks of the earth are falling off into an abyss. The gulf between basic conservational ideals and reality is so wide that the song’s title rings depressingly true.

The Knife take on gender politics too. In ‘Full of Fire’, Karin’s voice is alternately a macabre, deadpan rasp and vocoded death rattle that makes no concessions to prettiness. She lays the blame squarely at the feet of the patriarchy, inverting the truism that history’s victors are also its writers: ‘All the guys / and the signori / Telling another / False story.” Drums flurry in a panic before sinking into a maelstrom that’s all oily smears, synth grind, fighting snares, piles of dissonant melodies, high-pitched squawks and what sounds like a timestretched band of locusts. They all peak simultaneously in a petrifying clamour; ‘Heartbeats’ this ain’t. Dreijer Andersson’s voice is bent to awkward pitches on ‘Without You My Life Would Be Boring’, jarring against the nauseous midrange and messy polyrhythms. It’s an ironically “feminine” foil to ‘Wrap Your Arms Around Me’, which channels received masculinity via Vangelis-esque synths, clanging metallic percussion and glass crashes. Similarly, ‘Cherry On Top’ takes a scythe to cupcake cutesiness, offsetting the peaches-and-cream imagery with sour-metallic chords and brooding drones. Olof’s only vocal appearance is on ‘Stay Out Of Here’, his and Karin’s interlocking, androgynous voices mounting another challenge to gendered music over gnarly percussion, drum pad-led groove and a pitchbent vocal sample that make ‘Stay Out Of Here’ the most technoid, Oni Ahyun-esque track on the record.

Capitalism is up for evisceration in ‘Raging Lung’, a Fever Ray-esque ballad about inequality: “There’s the lottery / About geography… Poverty’s profitable”. Relatively untreated, Dreijer Andersson’s voice is plaintive and weirdly childlike as she howls, “And that’s when it hurts / When you see the difference”. ‘Networking’ jangles unpleasantly, pairing what sound like pitched-up vuvuzelas with rusted machine scrapes, synth burbles and twitchy, rapid-fire drums that, rather than upping the pleasure principle, throw a cold light on the paranoiac side of social interaction. Finally, Karin’s voice bemoaning the “dysfunctional culture” of privilege pierces the penetrating bassline and whomping kicks of ‘Ready to Lose’. That newly prominent vocal and the closing lines, “A final sequence / An end to succession”, hint at some small – albeit Pyrrhic – victory for those who fight the system.

At Shaking the Habitual’s core are the processes of deconstruction and reconstruction, so rare in the tradition of mostly reiterative pop music that the album feels transgressive, even though its underlying ideologies are reasonable rather than radical. “How do you build an album about not knowing?” the manifesto asks cryptically. Shaking the Habitual’s drive to defamiliarization is both an answer to that question and a solution to the problems it highlights: only by unlearning what’s familiar can we shake old destructive habits, and usher in change.