Thank You For Letting Me Be Myself 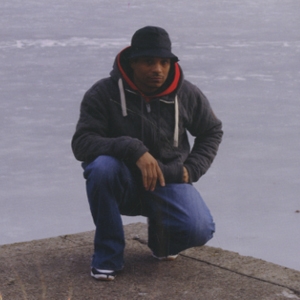 From the Tevo Howard-like simplicity of its artwork, Detroit producer Omar-S seems in the mood for straight-forwardness and honesty with his new album Thank You For Letting Me Be Myself, and it’s a feeling that prevails upon listening. Across his prolific and highly varied output Omar has always drawn upon a huge range of production techniques, but in this record there appears to be a cleanliness that probably sets the tone more than anything else. The Tevo Howard reference is therefore that much more pertinent – not in style, which is still distinctly Omar’s own, but a lightness and brightness of touch that wins out.

Romance seems afoot. Despite the name, closing cut ‘Its Money In The D’ possesses all the warmth of the album’s title, and even ‘DumpsterGraves’ holds on to this emotional vein, dropping the joy for something more contemplative. Again, despite the title, the music is sad only in a stoical sense, a dubby, Hype Williams-like atmosphere around a fidgety house beat. Elsewhere, beautifully titled ‘The Shit Baby’ pairs a stomping Chicago beat and bassline with jazz soul from D. Taylor on Yamaha stage piano, and ‘Rewind’ brings in the always magnificent L’Renee over just the first third of an unwinding minimal accompaniment.

There are moments of rawness too: the Phuture-like acid of ‘Ready My Black Asz’; ‘Tradigrade’s’ breaking proceedings with over four minutes of long, squelchy, clattering percussion; ‘Helter Shelter’ visiting the production values of These Complimentary Track’x. Opener ‘I Just Want’, mixed by Luke Hess, is particularly good, a fearsome, floating swarm of buzzing stabs, piano, vocal pleas, and ghostly 8-bit streams recognisable to anyone who has heard Actress’ ‘Rainy Dub’.

However, these are the exceptions to what is really quite a clean affair, the more unpredictable energy of previous releases pushed back to make space. Perhaps this is to clarify expression, but – and this is difficult to admit to – it feels a little too easy to focus on every part of Thank You For Letting Me Be Myself‘s tracks.

Trance-stab-driven ‘Air Of The Day’ is a good example, very defined, the calamity that normally colours Omar’s output, be it hard or quiet, having dissipated. Even when tracks get a bit messier, like the sunrise anthem ‘Amalthea’ or the moody, loopy ‘Be Yoself’, the control of the mix keeps things very much in focus. ‘Thank U 4 Letting Me Be Myself’ takes a similar disco-inspired Detroit house bump to his Theo Parrish-featuring ‘Who’s In Key’, but lacks the endearing, thought-provoking oddness of the original, a cut that would make stringent critics wonder how it even worked, let alone so well.

This latter track, while not quite as memorable, will still likely become a fixture of international dancefloors for a while, and this is probably a charge that could be levelled at Thank You For Letting Me Be Myself in general. As with nearly everything Omar-S does, it sets its own terms extremely well; there is so much of his character present that it becomes a strange exercise to compare and contrast it to other house producers’ efforts. Also, and it should be stressed, this is definitely a collection of good music, especially in how it is compiled, structured and flowing effortlessly as an album. However, it does also feels a little safer than usual and, weirdly, for an album that is giving thanks to being individual, not quite the Omar-S we know. Perhaps that’s the point.