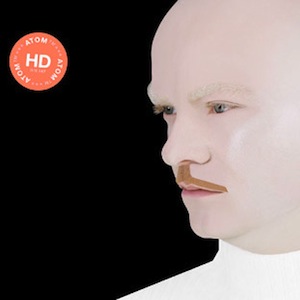 Let’s try and work out what Uwe Schmidt was trying to do on HD, his latest album as Atom™.

Raster Noton does pop. It doesn’t necessarily ring any warning bells, actually. It could be quite delicate and clicky, possibly even beautiful, like the Alva Noto and Ryuichi Sakamoto collaborations. But ‘having a good time at the discotheque’ isn’t something that really sits comfortably with the label as a concept. HD certainly hasn’t changed that.

There are only two tracks – ‘Riding The Void’ and ‘Ich bin meine Maschine’ – that lack self-awareness enough to be genuinely enjoyable, erring as they do towards the same hyperclean kitsch that successfully defines Kraftwerk’s Radioactivity and the entire career of Sebastien Tellier.

Neither manage to reach the same heights, however, and the rest of the album is so over-processed that all joy has been sucked out of it. For someone obviously having loads of fun making enjoyable pop music as, say, one half of Surtek Collective, in HD Schmidt’s imagination stretches as far as getting Jamie Lidell to guest on (sigh) a Prince-referencing track.

An attempt to push the realms of pop to a new level of sonic appreciation, experimentalism and quality?

Maybe. But it’s not happening. The album shares production values with the aforementioned Radioactivity, Daft Punk’s Human After All, Jimmy Edgar, TTC, and, of course, the entirety of the Raster Noton universe, and obviously is flawless in its technical execution. But in practice, what HD actually translates to is 40 minutes of impeccably isolated, overly Germanic, ultimately boring click-fizz-buzz-thump, panned all over the place, with some base pop standards square in the centre. And those are normally making things worse.

An ode to pop music?

Well, it could be. But if so, it’s in a weird, misguided, cynical, academic, overly defensive manner. Because then there’s this:

A painfully unimaginative statement about pop music being industry-born, and therefore ‘bad’?

Well, sadly, yes, this may well be the case. Within all the digitalism, consistently utilising the least progressive ideas of what constitutes pop music, Schmidt has included ‘Pop HD’, ‘Empty’ and ‘Stop (Imperialist Pop)’.

‘Pop HD’ is, to be fair, in French, but the title implies pop in high definition – that this song, and the ensuing album, is better than mere pop. Reading too much in to a title? HD was originally going to be called Hard Drive Rock – knowing this immediately suggests some weird shift from outright fun to an implication of superior technology and quality.

Perhaps he just meant his own project’s quality improving, but the chorus of ‘Empty’ hinges on the pun ‘Empty…MTV’ – and that is literally all you need to know about it. ‘Stop (Imperialist Pop)’ then wags the finger at major labels and big name pop artists; something I thought 15-year-old rock fans did, not 45-year-old men who have been highly respectable working musicians for the past quarter of a century.

Laughably – shortly after stating ‘fascist control, thanks to rock and roll’ – this track breaks into an even more embarrassing, bit-crushed, hyperactive remix of The Who’s ‘My Generation’. Is it a comment on over-compressed Justice electrorock, the kind of music that ends up on hugely corporate mobile phone adverts? Will Schmidt be proud when his own version inevitably ends up on one? Will he laugh at me for not getting the joke?

Oh, so an ode to independent pop music?

Um. Maybe? If so, Schmidt doesn’t seem to realise that, thanks to the internet, the charts are flooded with interesting producers, writers and performers from independent backgrounds, as much as X Factor shite.

Some, uh, of mixture all these things…?

Oh, I don’t fucking know. But more than anything, HD made me care even less why Schmidt decided to invest considerable amounts of time, energy and expensive studio resources into making a completely redundant statement about pop. Instead, this album annoyed the absolute shit out of me. And that made me sad.