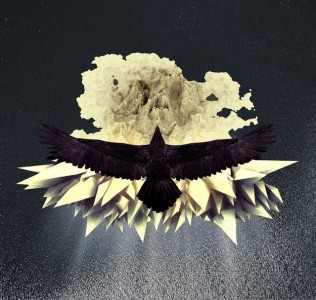 The working method of Montreal-based saxophonist Colin Stetson is singular and much discussed. Put simply, Stetson draws techniques from avant-garde jazz – multiphonics, overblowing – and deploys them in service of compositions that look elsewhere for inspiration: largely to the tradition of classical minimalism, particularly the so-called “holy” minimalism of Arvo Part. But while pop interpretations of that world tend to range from the maddeningly cliched to the emotionally monochrome (I’m thinking of the Sigur Ros-Olafur Arnalds axis here), it’s impossible to deny the affective power of Stetson’s music.

Perhaps that’s because, rather than floating in some mannered, quasi-ecclesiastical space, Stetson’s records are filled with the sounds of a body exerting itself to an extreme degree: strangled breath, fingers hammering on weighty keys, vocal keens and wails forced through a century-old tube of metal. If Stetson’s New History Warfare series evokes faith music, it’s to the North American tradition of spirituals and gospel, rather than the high-ceilinged churches of Europe, that it owes the largest debt.

That is as much the case in the series’ final instalment, New History Warfare Vol. III: To See More Light as it has been in the previous two. Conceptually and technically this album is very closely linked to its predecessor, Judges. Once again, the bulk of the record is formed of Stetson’s bass saxophone playing, recorded live, solo and with no overdubs. Complex mic setups were used to capture performances from multiple angles, after which the mixing nous of Australian producer Ben Frost served to explode these clouds of minute detail into a rich, multi-layered sonic world.

Technically, too, To See More Light doesn’t stray far beyond the bounds of Stetson’s past work, although the execution is bolder and more assured than ever before. Trance-inducing rhythmic loops, flickering, mirage-like columns of overtones and expansive drones are all recurrent features. The resultant compositions are striking and concise, and fluctuate from the diabolical to the beautiful – sometimes in the space of two tracks (‘Brute’ into ‘Among The Sef’, both highlights).

But Stetson’s approach feels considerably poppier this time around. The majority of tracks are led by those distinctive wailed melodies, deadened by the metal of Stetson’s instrument but still serving to contain its abstract flurries of sound within a more comprehensible framework. Which isn’t to say Stetson’s approach is simply a concession to accessibility. These moments are at their finest when, as in ‘Hunted’, their faintly anthemic tone risks tipping over into a fraught, distorted rasp; the masterful control of light and dark has long been one of the most appealing qualities to Stetson’s music.

Also expanding this record’s pop potential is the repeat appearance of Bon Iver’s Justin Vernon. Stetson has, of course, enlisted sometime collaborators for his records in the past, and Vernon’s vocals here sit a little better than Laurie Anderson’s slightly wooden monologues did on Judges. But – with the exception of the surprising barked pronouncements on ‘Brute’ – his distinctive stacked harmonies run the risk of taming Stetson’s playing, relegating it to backing status where much of its fascinating detail is obscured.

Vernon guest-spots aside, though, To See More Light matches its predecessor in terms of quality. Weak points are scarce – the brief, cautious ‘Mirrors’ and the overlong title track are the only slight misfires – and they are more than redeemed by frequent captivating moments: opener ‘And In Truth’, or the seductively simple ‘This Bed Of Shattered Bone’. And while To See More Light picks up smoothly where its predecessor left off, it certainly doesn’t feel like Stetson has exhausted the potential of his highly specified method. With the New History Warfare trilogy over, it remains to be seen where Stetson will take his solo work next. At this point, at least, it seems reasonable to have a good deal of faith in his vision.