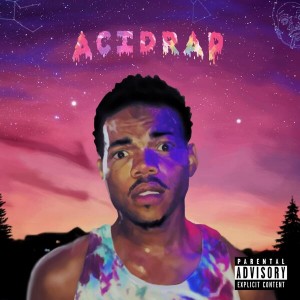 Acid Rap, Chance the Rapper’s second mixtape, is in part an act of catharsis, a reflection on and reaction to the trauma of his best friend’s murder and, more broadly, growing up in a city with twice the homicide rate of New York. On ‘Pusha Man’, Chance laments the lack of attention to Chicago’s problems: “Where the fuck is Matt Lauer at?… Looks like we had a fuckin hurricane here.” But he’s all too aware that the news stories and stats refer to real people, rapping “My big homie died young / Just turned older than him” in the Jake One-produced ‘Acid Rain’. Though he may display standard-issue rap hubris, Chance’s openness is endearing: he’s a fallible guy, prone to protracted periods of reminiscence and escapist acid tripping. For better or worse, you’re always on his side.

He reminisces on cartoon icons and lost innocence in ‘Cocoa Butter Kisses’, his high=-putched vocal a successful narrative device rather than an affectation, so when he deadpans “I think we all addicted” in deeper tones, his words take on an age and wisdom not ordinarily associated with twenty-year-olds. With Kendrick Lamar and Gunplay’s ‘Cartoon And Cereal’ such a recent memory, it’s difficult to avoid comparing the two rappers, and Acid Rap is indebted to last year’s good Kid m.A.A.d City in both concept and execution. But where that record displayed a self-conscious aspiration to the Illmatic canon of Serious Rap Albums, Acid Rap is all slivers of sparkling wit, nostalgic flashes and teasing wordplay. There’s real humour, whether in the more light-hearted tracks such as ‘Favorite Song’ (“Dang, dang, dang, skeet, skeet, skeet / She do that thing for three retweets”), and the more serious ones, like ‘Pusha Man’: “The days is pretty dark a lot / Down here it’s easier to find a gun than it is to find a fucking parking spot.”

He shouts out Wu-Tang and Dilla, but Chance’s main influences are from his hometown rather than New York or Detroit. Kanye’s impact on hip-hop tendency to eclecticism in the nine years since The College Dropout can’t be overstated, and Acid Rap’s beats take in Chicagoan drill and footwork (‘Chain Smoker’) as well as soul, gospel and R. Kelly-esque R&B (the adorable interlude ‘That’s Love’). But Acid Rap never sounds like a ragtag collection of sounds, its cohesiveness in large part thanks to the Chicago connection.

It comes through in the rapping too; Chance’s style may be his own, but you can hear the ghost of good Lupe Fiasco in his melodic delivery. It’s so obvious it barely needs stating but Chance is a very, very talented rapper: he deftly handles dense mouthfuls with an admirably tight flow and butter-smooth internal rhymes. He’s good to a fault, putting his guests to shame. Childish Gambino brings exactly nothing to the table on ‘Favorite Song’, and though Ab-Soul and Action Bronson do better, by offering their own take on Chance’s style on ‘Smoke Again’ and ‘NaNa’, they leave you in no doubt as to who the real star of the show is. For all his skill, Chance is aware of the limitations of his medium, as he confesses in ‘Acid Rain’: “Sometimes the truth don’t rhyme”. Nevertheless, as a portrait of a city, and a person, Acid Rap is about as good – and as honest – as they come.