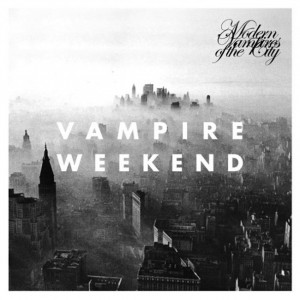 Let’s get the stock Vampire Weekend descriptions out of the way for starters: preppy, Ivy League-educated, afrobeat-influenced / afrobeat-thieving, Paul Simonesque, disconcertingly privileged, Upper West Side, hipster. It’s the last one which causes the most problems. Every now and then a band comes along who don’t initially get the fan base they deserve. The Beatles in 1964 had their screaming hordes, Bob Dylan his closed ranks of conservative folk, and Vampire Weekend have been lumped with an army of squealing Tumblr users, reposting Ezra’s tweets again and again and writing YouTube comments about his hair.

But they’ve earned so much more. Modern Vampires of the City is a record of inspired hyperactivity and ideas. It covers the thoughts and feelings of a worldly, cosmopolitan and insecure middle class with the concision, subtlety and humour we don’t see enough. The songs are crammed into one another, with the vocals coming in at or very near the start of every sound. They’ve a lot to tell us, as they switch back and forth from glassy ballads such as ‘Step’ and ‘Hannah Hunt’ to the childish ecstasy of ‘Everlasting Arms’ and ‘Worship You’.

Along with confusion about one’s own past and feelings, pity about others’ lives is a recurrent theme throughout the record. On ‘Obvious Bicycle’, a lonesome waster is told home truths about the world’s indifference. ‘Ya Hey’ is startlingly direct compared with its live equivalent, a development of the disappointment at a recalcitrant friend we had in ‘Giving Up The Gun’ on Contra, given a new sense of alarm and urgency. Modern Vampires of the City is about the bittersweet disappointment you feel in both yourself and your friends as you realise your teenage dreams are not going to come true, but that you’re probably just gonna end up alright.

Musically, it’s their most advanced yet, full of warm piano chords punctuating ethereal organ whispers, and the Vampire Weekend trademark of harpsichords and strings playing pop chord patterns is given new life thanks to the crystal clear production. Chris Baio’s basslines have stepped up a notch or two from the previous albums, and he looms over the whole album with Tina Weymouth-like slides, bumps and boings. Meanwhile, guitars play a much smaller part than they do on previous records, and when they appear they’re distorted and concealed behind studio trickery. ‘Finger Back’, for example, is centred around a standard Ramones chord progression played with Ramones-style chainsaw downstrokes, but it’s a million miles from the Ramones.

Ezra has added a new gimmick to his vocal repertoire, namely the sultry melodramatic spoken-word middle eight. This was of course perfected by the Shangri-Las, but whereas they spoke about boyfriends perishing in naval disasters, Ezra recites miniature stories about Jewish restaurants and falling in love with a girl’s playlist-making skills. Elsewhere, he squawks and screeches, croons and preens, channelling the divergent spirits of Buddy Holly on ‘Diane Young’ and Souls of Mischief on ‘Step’.

There’s been a lot of talk, from the band themselves and others, about how this is a dark album, depicting the disappointment of Obama’s America and so on, a feeling encapsulated in the penultimate track, the murkily ominous real estate ghost story, ‘Hudson’. In reality, though, this album is as life-affirming a piece of music as anything else you’ll hear this year: there’s nothing more uplifting than a good band getting better.