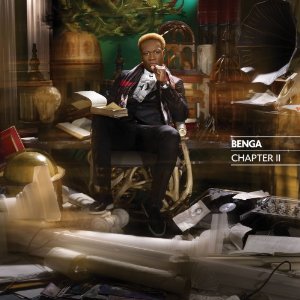 The dubstep self portrait is in some ways just what you’d expect it to be – hyper-masculine severity dressed up in market stall street wear – but it can be telling nevertheless.

The cover for Skream! caught the teenager looking as fresh-faced as his debut sounded and Joker went from looking like the pensive sort on the ‘Snake Eater’ single to dazed as the world rushed past him on The Vision – which is apt, considering his work is still stuck in 2009. Dismiss it as a spurious observation if you like, but putting an image of yourself on your album opens up an element of criticism about self-representation that would be otherwise disregarded, and when it’s flaunted in a way that borders on narcissism, you have to wonder what the motivation behind and long-term aim of doing so really is.

Whilst producers like Caspa, Kromestar and Rusko have all put their best fronts on for us, no one has committed themselves to the self portrait quite like Benga. After the cartoonish Newstep and the moody evasiveness of Diary Of An Afro Warrior we now have Chapter II – a portrait of a man surrounded by the spoils of empire that leaves me wondering not whether the ego has landed or not, but where I can seek shelter from it. After years in the underground and the runaway success of Magnetic Man, Benga now sees fit to depart from the dubstep scene and aim for the Singles Chart with renewed fervour, but the problem with Chapter II is that this dubstep-gone-pop producer doesn’t know how to write a decent pop song, and so ends up with an album that could have fared passably in the post-dubstep conceptual mire of 2010, but pales in comparison to other examples of current crossover success. If Jessie Ware can go from singing during Oneman DJ sets in the Boiler Room to having a Gold debut within a year, then Benga has fallen behind his desired contemporaries in failing to realise that his ego has higher aims than his music.

With Chapter II, Benga seems to think that pop is not about craftsmanship and escapism but mass appeal; that in order to be likeable you have to dumb yourself down, like an insecure teenager who claims to like everything so as not to distance himself from anyone. Not one track ends in a way that wasn’t touched upon in its beginning, and this has the two-pronged effect of hindering any sense of linearity as well as leaving precious little room for surprise. ‘Yellow’ opens promisingly with a massive rolling bassline bolstered by g-funk key stabs and rising talk-box hooks, but it loses its breath too soon and trudges along until the very last minute, which is drawn out to the point of being toe-curling. It never reaches such heights again.

The melody of the Charli XCX-assisted ‘Smile’ sounds like a hackneyed d’n’b ‘Better Off Alone’, while ‘I Will Never Change’, ‘Higher’ and ‘Forefather’ lose all nuance to their bloated basslines. ‘Choose 1’ and ‘Waiting’ are more TMF fodder than the euphoric festival hits that Benga’s pushing for. The hooks have no pull and release, the lyrics are forgettable and it’s all smothered by the very kind of predictable drum’n’bass that ironically inspired dubstep to emerge in the first place. It’s a shame, really. From the producer that wrote genre-defining tracks like ’26 Basslines’, ‘Night’ and ‘Music Box’ we now have an album that sounds like one thousand lower-middle income range car adverts; on reflection, that self portrait really should have been Benga lying prostrate on a chaise longue eating mouldy grapes. A tedious album from an otherwise great talent.