Crawling Up The Stairs 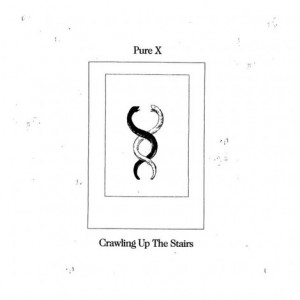 For Pure X, The Difficult Second Album was never really going to be more difficult than the circumstances leading to its creation: drummer Austin Youngblood finally moved from the band’s city of Austin, Texas to LA, to live with his girlfriend, bassist Jess Jenkins went through a divorce with his wife of nine years, and vocalist and guitarist Nate Grace suffered a leg injury serious enough to require surgery.

With no health insurance plan, and no money to pay for the medical care needed, it was likely Grace would never walk unaided again. Anxiety led to nightmares, sleep loss, insomnia…but then, strangely, to Crawling Up The Stairs. After a syrupy debut that captured what could be considered the melodic, poignant ‘Austin’ soft sound, their second album does sterling work at turning this into something just as dreamy, but also…well, sour.

Sonically, it’s a strange blend of references at work: instrumentation similar to old Ducktails, the slow-burning approach of Gayngs, and vocals reminiscent of How To Dress Well. Grace’s cracked falsetto rings through the record, sweet if unsteady, but moments of anguish colour it too, such as the snarling of ‘Someone Else’, the breathy trembling of ‘Things In My Head’ and the emotional delivery of ‘Shadows and Lies’. Production choices, particularly in distortion, saturation and tape echo, add surprising depth to many of the songs, much like How To Dress Well’s eponymous album.

One of Crawling Up The Stairs’ strongest points, however, is a continuation of this detail across all parts, pulling the traditional guitar, bass, drums and vocal set-up into a wandering, un-fixed space. This is achieved through a layering of subtleties and tweaks, simple kosmische synthesizer lines and unexpected musical choices: the vocoder of ‘Written In The Slime’ and ‘Never Alone’; the thick filtering of ‘Rain At Dawn’; the thick, jumpy synth bass of ‘All of the Future (All of the Past)’; the strange funk of ‘I Fear What I Feel’. Every track is meticulously constructed and absolutely fluid.

The mix, too, is wonderful, courtesy of multiple Grammy award-winning engineering don Larry Seyer. Parts ebb and flow effortlessly, each song feeling like it could, at any given moment, veer off into new territory. They often do – solid walls of fuzz guitar are prone to rise from nowhere, vocals to be joined by effect-wet overdubs, clouds of delays and overtones engulfing and changing a section’s character dramatically. It’s a brilliant display of balancing and counter-balancing, committed to tape with obvious understanding and diligence.

For all the setbacks and suffering Pure X have apparently gone through, Crawling Up The Stairs is a real achievement, and probably all the better for such experiences. It’s an album that happily draws upon familiarity as a ruse, a means to take the listener somewhere far hazier and less comfortable. It’s bleak and bittersweet, and it’s very well done.