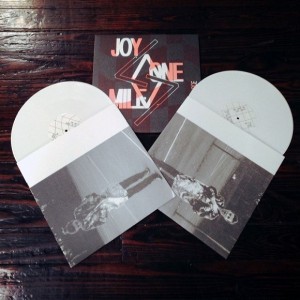 Originally trained as a classical double bassist, Christelle Gualdi’s entry point into dance music was via the fertile community of modern synth musicians that included Oneohtrix Point Never, James Ferraro and Emeralds. Her 2009 album as Stellar OM Source, Heartland’s Suite, was a largely beatless work filled with swirling, intricate synthwork that exemplified the group’s aesthetic. Inevitably, the American synth set went different ways: Emeralds made the least ambitious album of their career before splitting up; the dream-team of Daniel Lopatin and Tim Hecker yielded a surprisingly pedestrian record, and James Ferraro’s most recent work, the Cold mixtape, reflected an increasing engagement with R&B.

Gualdi, on the other hand, self-released a number of CDRs and now follows them up with Joy One Mile, one of the most rewarding dance full-lengths to be released in quite some time. It joins Holly Herndon’s Movement and Maximilian Dunbar’s House Of Woo on RVNG Intl’s catalogue of records that are neither wholly experimental nor filled with straight dancefloor cuts, but located in that sweet spot between the two. Performed live on Gualdi’s arsenal of hardware and mixed by Kassem Mosse, Joy One Mile is a refreshing change from both the anodyne preset-heavy dance music and the self-consciously lo-fi house and techno records that seem so ubiquitous at the moment.

Instead, its reference points of mid-’90s IDM, Detroit techno and electronic funk locate Joy One Mile outside current trends. Take the soulful Moodymann-esque vocal sample of ‘Par Amour’, or the gleaming acid lines that course through ‘Elite Excel’ like quicksilver, nodding to both Plaid and Drexciya. Gualdi’s knack for a compelling, complex melody is still strong, and Joy One Mile is rich in synth workouts, from ‘Par Amour’’s futuristic acid line to the noodly excursions of ‘Fascination’. Unlike Heartland’s Source, though, the beats are as important as the melodies, the dry whip-cracking hi-hats and chugging kicks that counterbalance ‘Polarity’’s high-pitched synth passage a case in point. Interlocking polyrhythms meet meandering synth lines on ‘Elite Excel’, while ‘Natives’’ treacly melodies segue into an exquisite percussive lashing that wouldn’t sound out of place on Aphex Twin’s Drukqs.

‘Trackers’ and ‘The Range’ rove around with all the hyperactivity of a live jam, reined in by an instinctive restraint. Similarly, Gualdi winds down ‘Par Amour’’s seven minutes of pounding beats and belted diva samples with instinctual ease, reducing the vocals and drums to a faint throb for the final few seconds. Fluent mixing and arrangement may make the various elements gel, but they never detract from Joy One Mile’s freedom and aliveness, the qualities that lend the album its titular ecstatic vibe. If there are any criticisms, it’s that the sound palette is somewhat limited and the tracks occasionally too long to sustain your interest. Still, there’s very little to fault here, and the bonus track, Kassem Mosse’s spacious, slowed remix of ‘Elite Excel’, dispels any hint of fatigue. Joy One Mile is a rare gem indeed: challenging but fun, idiosyncratic but refined, and cerebral but bodily, it’s everything electronic music ought to be.