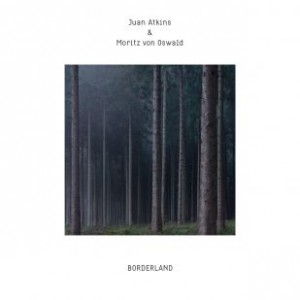 Here’s a question I didn’t expect to be asking myself in 2013: how can Juan Atkins and Moritz von Oswald, two pioneers of vital strands of techno, end up sounding like second-rate Dreadzone?

I’ll admit that my expectations weren’t high; Atkins has been on some kind of weird fumble for the last 15 years, and the Moritz von Oswald Trio has never proved particularly exciting for me, though I laud the premise. But the pair’s collaboration Borderland is just energy sapping in a way I wasn’t expecting. It’s exhausting to sit through an hour-long record that is so unaware of very basic editorial decisions that would easily improve it, and no amount of repeated listens helps here.

Ignoring the aesthetic fact that it sounds like the idSpiral chill-out tent at Glade Festival, Borderland’s biggest victim is variation. Sure, techno is repetitive, but the lack of scope to Borderland is more than adequately expressed by lifeless opener ‘Electric Garden (Deep Jazz In The Garden Mix)’. The track’s foundation is an unwavering, 120bpm, 2-bar minimal techno loop on drum machine, bass and synth organ; over the top is a sustained chord from overdubbed trumpets and some rainforest-y sounds. That’s it. It’s dull, and at 10 and-a-half minutes sounds like the meandering background music of a head shop, but it could hardly be considered offensive.

That is, until it becomes the album’s second track ‘Electric Dub’, a version without the trumpets and a bit more delay. For a further 11 minutes.

In total, Atkins and von Oswald thought these two bars warranted an astonishing 38 minutes of a 61-minute album: ‘Electric Garden’ rears its head twice more in Borderland as ‘Electric Garden (Original Mix)’ (12-and-a-half minutes) and ‘Mars Garden’ (4 minutes). These make an album in itself, although you may need a couple of decades’ worth of LSD floating around in your spinal column to want it. That they don’t even occur in a continuous sequence (tracks 1, 2, 4 and 6) is particularly galling; just as you think you’ve escaped, you hear that chord fade in and, against your will, you’re plunged back among the hemp hoodies, incense and didgeri-fucking-doos, the plodding beat an incessant reminder of how much longer you have to endure this oblivious nonsense.

Elsewhere, ‘Footprints’, ‘Treehouse’ and ‘Digital Forest’ all showcase more of a modern Juan Atkins style, mainly due to the presence of an uptempo 909 and some nice, tweaky, nasal synth melodies. These aren’t bad and boost the overall score, but fuck me if they don’t all contain instrumentation from ‘Electric Garden’ too, magically transforming them from OK to aggravating.

And then, tucked in right at the end, is something that sounds like a heavily filtered, sped-up, two-minute abstraction of Lorenzo Senni’s ‘XMonsterX’ ­– the only point in Borderland that makes no sense and improves it. This finale, ‘Afterlude’, is by far the best track on the album – partly because it is pure sci-fi doom at zero gravity, partly because it sounds like the best Basic Channel material moving somewhere new, but mainly because it is absolutely nothing like anything preceding it on the record.  Please let me out of this garden, now.