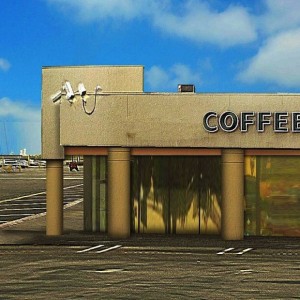 Back in 2010, Zane Reynolds released a split EP with Polysick on the Swishcotheque label, a lesser-known home for post-AFX acid and IDM. Both producers have since moved on to pastures new, but continue to fly the flag for lugubrious, melodic acid techno, presiding over something of a mini-renaissance for the form. But where Polysick’s music variously evokes woozy hypnagogia, slick Detroit techno-scapes and steamy fourth world exotica, Reynolds’ SFV Acid project is, and has always been, strictly parochial in outlook. The name references the San Fernando Valley, a sleepy urbanised area just outside Los Angeles, and Reynolds’ angle on his chosen form seems to have taken on the colour of his hometown, featuring warm, languid pads that leave vapour trails in their wake, and coiling acid basslines rendered sluggish in the heat, like snakes basking on hot rocks.

The Dwell, Reynolds’ debut LP, brings with it an additional conceit. This record was made entirely in a Starbucks in the Valley, a favoured hangout of Reynolds’. In places this context is referenced quite literally: the brief ‘Mecca_Bucks’ and ‘Devonshire Dwell_ New Graceland’ are both built from ambient coffee shop noise – the latter in particular is a pretty bracing sound-collage, all garbled speech and distant traffic roar. More fully realised is ‘Chronicled C_affeine Headache’, where those processed quotidian sounds give way to gorgeous Oneohtrix Point Never-esque synth texturing. The effect is oceanic, calming and quite beautiful, as if Reynolds has discovered something profound in the midst of the everyday. That is, until the mood is shattered by the sound of somebody defecating, a sonic pratfall that’s vaguely funny but seems like a defensive move, as if Reynolds is afraid of letting sincerity hang in the air.

Is The Dwell essentially a jokey record then, a few pokey acid tunes strung together with the barest thread of a concept? Certainly, budget comedics have long been the downfall of much post-AFX electronic music. And you’d be forgiven, at first glance, for interpreting the concept behind this album as arch – a knowingly oddball piece of hipster showboating. Granted, there are moments of playfulness here – ‘Misto’, say, with its lounge-y chords, or the brisk skip-and-jump of ‘Mocha’. But, shit joke aside, upon listening to The Dwell it becomes clear that Reynolds isn’t playing for laughs. Rather, this is music designed to slot into the humdrum flow of everyday life, light-hearted sometimes, but affecting too; small-scale but undeniably seductive.

Its best moments, then, are quite lovely. ‘Kludes’ and ‘Dwell On 2’ are both pensive, coasting numbers, all hazy surface and heartbeat electro pulse. The stumbling ‘PT Sex’, with its bright, unstable detailing, is particularly striking. Often the surface simplicity of these tracks conceals subtle intricacies, with Reynolds paying particular attention to his percussion (see, for example, the heavily syncopated ‘TEMP gun’). But rarely does he aim for anything approaching dancefloor intensity – with the exception, perhaps, of ‘Money’, whose barrages of snaredrums seem unpleasantly sharp in the heat haze.

Instead, Reynolds is at his best when he allows his mind to wander. Many of these tracks reject closed structures in favour of unexpected twists and turns, as if several different tracks have been spliced together – as in opener ‘Dwell Master Infinite’, which reinvents itself multiple times, or the aptly titled ‘2PART’. In each case the intention seems not to unsettle so much as to force us to match Reynolds’ relaxed, faintly aimless stride, safe in the knowledge that we’ll get where we need to go eventually, even if we end up taking the scenic route. And if there are a few moments where motivation is lacking altogether – ‘Fresh And Easy’ and ‘Sha Day’ both seem overly content with resting on their laurels – then perhaps that’s all part of the effect. This, after all, is Reynolds’ real skill: evoking the pace of a lazy day in a quiet-ish part of town, a little low on ambition perhaps, but all the more appealing for it.