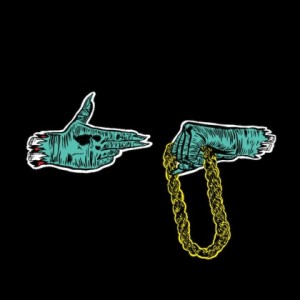 Produced entirely by El-P, last year’s R.A.P. Music was one of the standout hip-hop releases of 2012. Killer Mike’s raps were dense hunks of sinew that slithered and flexed all over the bones of El-P’s beats, weighty yet deft. Now, Killer Mike and El-Producto have formed a rap duo proper, Run The Jewels and their self-titled debut has all the makings of a hip-hop classic. Again produced entirely by El-P, Run the Jewels is light on guest spots (a verse from Big Boi, a hook from Until The Ribbon Breaks, a brilliant turn from Prince Paul and that’s it) and runs at just over half an hour. Still, it packs plenty of punch, and the lack of guests means that both Killer Mike’s wickedly nimble straight-up Southern thug rap and El-P’s more abstract East Coast style have room to shine. Carried by chugging basslines, El-P’s beats swagger all over the place, the battered organ chords and mutated samples creating a raw and visceral vibe that complements the verses perfectly. ‘Run The Jewels’ is all ominous snare clatter and guitar shred, ‘Get It’ pairs a sped-up vocal sample with a fat bassline, and the ugly synth timbres and finger-clicks on album highlight ‘Sea Legs’ evoke the song’s seasick disorientation.

Killer Mike and El-P tend to stick to rapping about rapping (‘Job Well Done’ contains the line, “Emperors that hear the tunes admit that they are nudists”), women, and violence. Old ground maybe, but who cares when it sounds this good? Run The Jewels do funny pretty well too. ‘Twin Hype’ features Prince Paul as sleazy voiceover man Chest Rockwell, interspersing El-P and Killer Mike’s verses with such gems as “You’re the type of girl I can really see myself artificially inseminating” and “I got a brand new deck of Uno cards / The night’s just getting started.” Killer Mike does brutality beautifully throughout, saving his most vicious lines for closer ‘A Christmas Fucking Miracle’: “The beat breaks and your teeth break / Keep your canines embedded in my knuckles like a keepsake / It would seem your veneers are mere souvenirs falling out of your mouth and onto the landscape.” Elsewhere, he shoots a poodle (‘Run The Jewels’), promises to “send you to the E.R”  (‘36” Chain’) and threatens to take “grip pliers… to the top of ya teeth” (‘Banana Clipper).

Run The Jewels may lack the overarching political themes of R.A.P. Music, but its crowning glory, the ghetto lament ‘A Christmas Fucking Miracle’, hits as hard as anything on that album. Over a spare, yowling beat, El-P’s fatigue and empathy seem fathomless as he raps, “The most impressionable minds get molested and informed by manipulating forces / Don’t fret little man, don’t cry, they can never take the energy inside you were born with.” Killer Mike’s verse takes in social mobility, single families, slavery and “the worshippers of idols and followers of things” before an eerie choir and crunching guitar bring the record to a jarring close.

The debut album from a new pairing of rap luminaries, Run The Jewels is bound to invite comparison to Watch The Throne, something ‘Sea Legs’ was no doubt intended to promote (“N***as will perish in Paris / N***as is nothing but parrots”). But rather than a marriage of convenience between two rappers divorced from reality, Run The Jewels seems like a vital destructive force, El-P and Killer Mike bound by mutual respect, phenomenal talent and a shared villainous streak. Run the Jewels is savage and witty, rich in gritty truths and genuinely affecting wisdom. It may not be the best thing either artist has done, but fans of both will still find plenty to love.