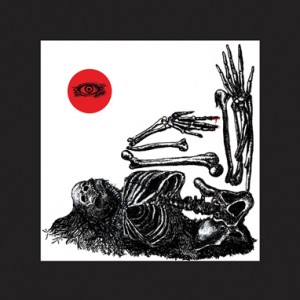 What strikes you first about Regression: Blinding Confusion is how little there is going on. The kind of battering-ram noise synonymous with Nate Young’s work in bands such as Wolf Eyes and Stare Case is largely absent; instead, this continues the desolated simplicity and narrow palette of the Regression trilogy’s first two installments, forgoing white-knuckle terror in favour of profound disquiet.

‘Between’, for example, cushions its pounding drones with silence, the only sound often the omnipresent quiet froth of tape. Spaces are filled only to taper off into nothingness again, as in the brilliant ‘The Bastard Guns’, where Young stacks plangent synth loops and thin shards of noise into a slow dirge. In the reverb-heavy ‘Escape With Nothing’, hollow clanks that sound churned up from a dank underground place are overlain with quick bursts of noise; ‘Beneath The Mist’ is drier, a short fearsome piece whose hollow sputtering rhythm, mangled grunts and spurts of white noise seem to hang in cold inert space.

The most melodic track on here, ‘Only Fallen Heads’, is a yowling lament, its lattice of chords pregnant with enough dread that its complete lack of noise isn’t an issue. The centerpiece of the album, ‘When Nothing Works’, is Blinding Confusion’s most grandiose track. Beginning with a powerful bassline and lattice of trebly noise, it descends into a bleak heavy thump as Young unleashes slabs of bass that hit you right in the chest into a black void. Splinters of noise and soft mosquito wails seep around the doom-laden morass, a far cry from the saw-grind and shrieks of Wolf Eyes songs but with an impact that’s no less forceful.

Blinding Confusion is oddly sequenced, with synth-led songs and murky, amelodic pieces arranged seemingly haphazardly around the central track. The effect is of a Lynchian series of suspended, disconcerting vignettes held together not by narrative logic but by a forbidding, cinematic suspense, which combined with the record’s short running time – less than forty minutes – prevents it being all atmosphere and no substance. Even if it mostly lacks the abusive sonics Young is better known for, Blinding Confusion shares their drive to terror, its captivating songs isolated and stark yet creeping ever forward, unrelenting.