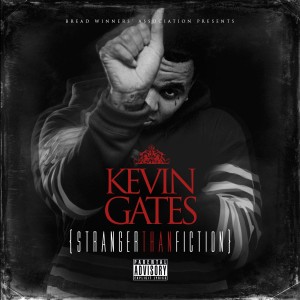 Kevin Gates’ rise from regional favorite to rapper-to-watch has been marked with the dual forces that often handicap twenty-something talents from the ghetto: label indifference and legal impedance. Gates spent several years in Young Money purgatory and then a couple in jail for drug and firearm charges, but he emerged from the experiences not with a chip on his shoulder but a new outlook on life.

On his breakthrough mixtape The Luca Brasi Story, Gates established himself as a rapper able to tell both street life and love life tales with the same emotional honesty. Stranger Than Fiction burnishes Gates’ bona fides as a deft storyteller and lyricist who knows the devil is in the details. As on Luca Brasi, these aren’t the typical, self-aggrandizing stories of drug-dealing and roughnecking. Gates is resigned to the violence and heartbreak of his surrounding — he’s not celebrating it. It can be a tough line to walk: while he raps on ‘Don’t Know What To Call It’ that “introverts can’t be too talkative,” Gates disproves that throughout the album.

Typical of the album’s street/sex balance is ‘4:30 AM’, a song with a hook dedicated to “children…somewhere on the corner.” There’s the brutally vivid first verse, which ends in a murder attempt: “Where were you when I was slumped over?” he screams, “Gums hurting from an old bullet, in front of the toilet hunched over / puking all of my insides, stab wounds from a old friend.” The lines drip with pain (either real or imagined). On the second verse, Gates runs down a list of who’s-screwing-who; there’s something charming about his awkward “stating facts” and “most likely forgot to mention” clarifications… as he raps about sex in a trap house.

At times, Gates’ no-bullshit approach leads to poignancy: “Back when we was little… innocent making faces in the window,” he reminisces on ‘4 Legs and a Biscuit’, wondering “who’d ever think we’d grow up and turn out to be killers?” On ‘Smiling Faces’, his increasingly ragged shouts are revealing: “Reason I can’t quit, sir / my anxiety fuckin’ with me / every bitch I’m with / find out I ain’t shit / after three weeks of just fuckin’ with me.”

Gates does more than just dour, though. As the title would suggest, ‘Thinking With My Dick’ is a light-hearted (if ignorance-embracing) snap rap ode to women that “ain’t too pretty in the face but…super thick,” on which Juicy J drops one of the album’s well-placed — and rare — guest verses. Half-sung bedroom rap ‘Strokin’ isn’t just the usual checklist of raunch; who else raps about “my fingers scratching your scalp”? He’s also a chameleon, contorting his voice and flow for the task at hand: he’s languid and depressive while calling out fake thugs ‘MYB’, and he affects the patois of a dancehall toaster for the hook of ‘Tiger’. Sometimes, he plays a character (or two): on ‘Careful’, he unveils a puffed-up Ludacris impression, then does the second verse with a country drawl as “Redneck Rick.”

Musically, Stranger Than Fiction flows from contemporary Southern hip-hop without relying on the paint-by-numbers beats that dominate the world of Brick Squad wannabes. The dramatic, synth-soaked beats that underscored Luca Brasi standouts like ‘Neon Lights’ and ‘Arms of a Stranger’ return on songs like ‘4:30 AM’, ‘Tiger’, and ‘Smiling Faces’. There are sonic turns to keep things interesting: the propulsive ‘White Tan’ is punctuated by plucked strings, ‘Strokin’ gets a touch of steel drum, and it sounds like someone borrowed Mike WiLL’s theremin patch on ‘Die Bout It’ and ‘Money Magnet’.

Unfortunately, the decision to release Stranger Than Fiction as a hybrid album/mixtape led to some questionable choices. Streaming-only tracks ‘Patrick Swazy’ and ‘Snake Nigga’ are pale Migos imitations; the latter features the Atlanta group, but it sounds as if Gates is a guest on his own track. Does the world need a Wiz Khalifa remix of Gates’ stellar ‘Satellites’? And where is the equally excellent pre-release single ‘Roaming Around’?

Minor issues like that make Stranger Than Fiction very good rather than great, but Gates hasn’t sacrificed any of the characteristics that garnered all this recent attention. With his heart-on-sleeve tendencies and a throaty growl that’s often girded with Autotune, comparisons to Future were inevitable. But while Gates has certainly benefited from Future opening the door for post-beta-male rap, he walked through it by himself.