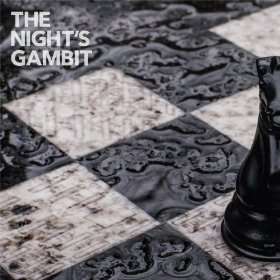 He may have come up in the ’90s as a marginal member of Natural Elements, but it wasn’t until the late 2000s that Ka became a vital voice in his own right. ‘Firehouse’, a raw highlight of GZA’s pretty tired album Pro Tools, was Ka’s point of re-entry into rap, and he followed  it up with the albums Iron Works and Grief Pedigree, pairing weathered sample-dense beats with intense yet understated rapping. On The Night’s Gambit, he takes you even deeper and further on the harrowing journey through the grim projects of Brownsville, Brooklyn, and the workings of his troubled mind.

The best songs on here are the most fucked up ones, where Ka lays his spiritual and moral conflicts bare. Threats intermingle with prayer and grief as he asks for forgiveness on ‘Our Father’ (“The attack won’t bring my brother back, the pastor right / But since he popped now my man got the drop in the afterlife… Forgive me for what I’m about to do”), his path as a killer inevitable. ‘Peace Akhi’ is even bleaker. Once again bound to enact hustler justice on another dead man’s behalf, Ka laments, “Pistol’s the only piece I see / It’s war here but still tell my niggas peace Akhi.” It’s heavyweight stuff, and none of it would work if Ka weren’t an incredible rapper. A forceful intensity that bubbles just beneath the surface prevents his quiet, grizzled monotone being anything but utterly compelling. He does what the best rappers do: makes it look easy, unspooling dense rhymes like “In the streets buggin, huggin cousin snug / Blitzed but still puffin’, it’s nothin’ cuffing a dozen slugs” with an effortlessness born of natural talent and decades of practice. He works grief, admiration, and the futile last swagger of a dying man into his vivid portrayal of murder, yet for all his technical excellence, Ka is so quiet on ‘Peace Akhi’ you need to adjust the volume, making the Morricone-like string samples resonate massively.

Hurt but all the wiser for it, Ka uses the conceit of chess to tie together this document of his journey from hard-as-nails thug to saved rapper. Skits and allusions draw parallels between self-preservation by way of attack (“defensive moves were considered cowardly” in ‘Barring the Likeness’) and lives dispensed with too early (“Pawns man, in the game, they get capped quick. They be out the game early. Unless they some smart-ass pawns”). Ka turns the battle inwards too, reason failing to dampen his hunger for revenge (“fuck strategizing”). More positively, ‘I’m Ready’ casts the knight as the indomitable cavalier “that can jump over any and all obstacles” as Ka tightens his grip on the future. On a subtler level, his introspective, magnetic raps give form to the game’s periods of keenly focused contemplation. That there’s only one guest on The Night’s Gambit – the excellent Roc Marciano on ‘Soap Box’ – only heightens its pervasive isolation.

Musically, The Night’s Gambit draws on the sound of late ’80s and mid-’90s East Coast rap without being beholden to it, Ka mining his record collection to create tapestries of battered samples. Soaring strings and soulful piano in ‘Jungle’ recall vintage RZA slow jams, and the blaxploitation funk loops of ‘Soap Box’ make Roc Marciano’s sibilant threats sound even more louche. But though these songs are beautifully crafted, The Night’s Gambit is best when Ka’s beats are as desolated as his darkest lyrics. ‘You Know It’s About’ backs up his hoarse double-tracked raps with grim thumps, and on the more sinister songs Ka rips out the drums almost entirely and does an awful lot with very little: ‘Barring the Likeness’ uses loops instead of beats to drum up paranoia; ‘Our Father’’s beat is an ominous loop, tapping woodblocks and very little else, and the hollow knocks of ‘Peace Akhi’’s are almost its only percussion. They’re like hip hop songs that have been disembowelled.

The Night’s Gambit is heavy with the kind of wisdom and experience that can only come with age. It’s sad to say, and I don’t want to name names like Jay-Z or Nas, but it’s so common for ’70s babies to follow up exciting albums with an endless string of middling records that Ka’s honesty and dignity are something of an anomaly. He reflects on his new destiny on ‘Nothing Is’ (“What was important for me as a child ain’t mean nothing now / If this ain’t for me, nothing is”), and closes the album with ‘Off The Record’, using the same single-verse formula as GZA’s ‘Labels’ to reel off references to dozens of hip hop gold standards. It’s both an old guard rap nerd’s paradise and a lovable homage, the lightest moment on an album sorely lacking in them. That near-total absence of humour (a cold laugh in ‘Soap Box’ doesn’t count) is partly what makes The Night’s Gambit so emotionally exhausting and is its only serious flaw – but then again, suffering’s no joke. He may have found a way out of a cycle of violence and pain, but Ka still has to do battle with his inner demons.