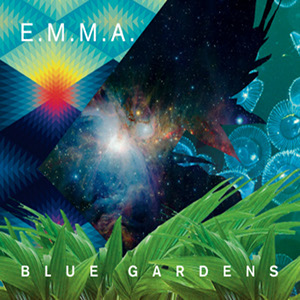 Sometimes I come across a record that is particularly challenging for me, and recently this has come in the form of Blue Gardens, the eagerly anticipated debut album from E.M.M.A. on Dusk and Blackdown’s Keysound label.

What should be acknowledged before anything else is that Blue Gardens is a very well written album, and that her fans won’t be disappointed. E.M.M.A. is talented at composing dance music that travels through many sections and developments, in a way that seems effortless and, crucially, that few people are doing. However, being firmly rooted in the 2010-ish era when ‘seasick’ and ‘neon’ were being used to describe a return to simplistic synth waveforms, this album goes even further to the point of saturation.

Personally, I have never understood how working with barebones squarewaves, sawtooths, sines et al became as popular as it did among house producers a few years ago. I can appreciate a desire to work with a purer or simpler kind of synthesis, but here I think it weakens her strong material. E.M.M.A.’s synths work hard, but the sonorities can’t keep up. The result is that they sound more like placeholders, prominently VST or preset-sounding even if they aren’t.

That’s a shame for me, as there are a lot of noteworthy points in Blue Gardens. The mono overlapping of several individual parts doing their thing in ‘Dream Phone VIP’ is tight and tumultuous, as are the elements of funky and bassline house in the percussion and bass. ‘Marina’ may be quite homogenous in its dubby, squelchy bells, but the melodic counterpoint is strikingly lovely, fuzzy bass tones giving the perfect energy contrast, and it’s all been stuck in my head for days.

‘Cherry Flavour’ hits on the spidery 8-bit effectiveness of Zomby’s One Foot Ahead Of The Other EP (weirdly stuttering crash cymbal aside). ‘Green Light’ has a uniquely odd shuffle and melancholy in its beat and synth harmonium, offset by gurgling sub-rattles and howling saws, and ‘Shoot The Curl’’s saturated high-end winds around a really strong, dramatic chord sequence. Additionally, there’s not a step out of place in any of the taut beat constructions throughout the record.

Nobody should be discouraged from making music on whatever they have or want to use, of course. If you really don’t find a maxed-out VST sound off putting I’d chalk this up to preference and take only the positives mentioned here. But in Blue Gardens something a bit more sonically vivid is touched upon in ‘At Sea’, when acoustic percussion samples and a less stable synth harmonium shiver and waver in a manner that subtly detaches the track from everything that preceded it. There’s something else hinted at, and I definitely think this kind of ambiguity is a way for E.M.M.A. to expand her sound without losing the character so obviously on display otherwise.