Until Human Voices Wake Us 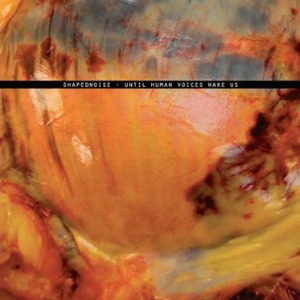 It’s been rather disheartening to watch the gradual stabilisation, in recent months, of the frantic Brownian collisions of noise, industrial and techno that gave us Pete Swanson, Vatican Shadow, latter day Perc, AnD et al. These days there is a veritable horde of imagination-starved aspirant producers kneading the teats of the technoise cow.

But it’s important not to let listener’s fatigue deaden us to the good stuff. Granted, the recently released debut LP from Violetshaped – of which Nino Pedone is one half – felt like a fairly rote collection of stern industrial gestures, well executed but lacking in surprises. And over the past year the Berlin-based Italian’s solo work, as Shapednoise, has closely followed the contour of the scene at large, developing from coal-blackened but rather decorous techno into something more ragged, more aggressive, and less beholden to dancefloor convention.

Fortunately, unlike some of his peers, Pedone’s output has also become increasingly imaginative and wide-ranging in that time. His debut album The Day Of Revenge, released this year on Dominick Fernow’s Hospital Productions, launched off from the dancefloor into gut-churning noise experiments and migraine ambience to thrilling effect. Until Human Voices Wake Us, similarly, is most definitely music for noise-punk basements rather than low-lit Berlin clubs. But here even the deadening negative space often found on The Day Of Revenge is largely absent. Instead, much of the album is spent teetering on the threshold between fever-pitch techno and a grooveless, oppressive form of rhythmic noise.

If anything, opener ‘Witness Of A Heart Attack Death’ over-eggs the sweatbox squat rave omelette – its endless layers of scorched texturing and burly percussion are piled atop one another with a tiring disregard for sonic finesse. For the most part, though, Pedone proceeds with a little more subtlety. ‘Between Hallucinations And High Poetry’ is pitched perfectly between palpitating industrial throb and lockstep gabber abandon, leaving you unsure whether to dance frantically or lay back and let the dread wash over you. The excellent ‘Survival Of The Dead’, meanwhile, has a certain diabolical groove to it, albeit rendered in a stumbling, asymmetrical time signature.

Elsewhere, Pedone leaves techno even further behind. ‘Information On The Individual Sensoriality’ is built around a single hackle-raising bass texture that degenerates into beat repeat mayhem in the closing minute; ‘Black Cells’’s utterly noxious midrange texturing is a delight. There is little by way of melodic or harmonic hook here – with the exception of the faintly Vatican Shadow-like icy chord underpinning the title track – just a relentless sequence of abrasive, tinnitus-inducing sonics.

The Day Of Revenge was arguably a richer record; it was certainly a less exhausting one. But Until Human Voices Wake Us is highly convincing on its own terms, and – even more importantly – refreshingly cliche free.