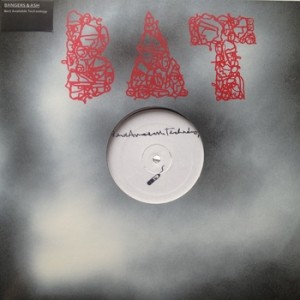 Bangers & Ash – an imprint of New York’s Styles Upon Styles Records – has a great concept; release a 12” where one side is dedicated to club tracks, the other for smoking jams. Bangers. Ash. Geddit? This is more than enough of a hook for me, and I was particularly happy to learn that Best Available Technology – or BAT – would be releasing his next EP on the label.

BASH004 comprises of five tracks; three for nodding to while sitting on a friend’s bed, not managing to go out after all, and two for a dance wormhole. BAT’s sound here progresses in production quality, the warm, buckling, bit-crushed voice he has established a little more defined, drawing comparisons to the clunking flight checks and radio static of Actress’ ‘Harrier ATTK’ or the dark, star-pointed wading of his Parallel World EP.

The ash side focuses on a loping, ’80s/’90s NYC boom-bap hip hop pulled into abstraction, the kind of thing you could easily imagine Sensational muttering wildly to himself over. ‘Bulldozer Rituals’ laces an air raid siren-like sample with wildly rising and collapsing twinkles, chopping the beat unexpectedly in off-kilter ways. ‘Vulgar Geometry’ is an exercise in tension, both in its sustained sci-fi / horror chord loop and its tripping, stumbling beat. ‘Venom, Pheromone, and Phosphorous’ revisits the sliding, unanchored pitches of ‘Bulldozer Rituals’ but inverts the idea, focusing on the high register chimes while hazy dub rumbles punctuate them.

The banger side then quickly drops into the fascinating ‘Contrecoup’, metronomic yet completely human in its 134 bpm steppers rhythm. Claves, bursts of low fidelity sound, sparse breakdowns, dub chords and a brilliant recurring accent sample that defies description make it crucial. ‘Tide Tunnels’ follows, taking a more German blueprint and pushing it around roughly; a wash of offbeat pad chords are filtered and tweaked as its steady 120bpm beat slowly transforms back and forth between different layers.

BASH004 throws up an end result that is slightly odd – the first side could be shorter, perhaps even one track less, and ‘Contrecoup’ could have been twice as long – but this is also what makes it both interesting and, in its way, endearing. Like watching someone as they work through an idea in real time, BAT mines small amounts of material, and that’s part of both the challenge and reward of his music. These are tracks that would probably sound best layered tightly in an adventurous, sideways veering mix, so it’s great to see him finally getting a release on wax for this purpose.