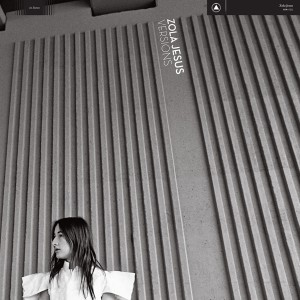 When, last year, Nika ‘Zola Jesus’ Danilova was commissioned for a one-off performance in New York’s prestigious Guggenheim museum, she enlisted composer J.G Thirlwell – of Foetus and other projects – to aid in arranging her songs for string quartet. Reenacted live in the studio shortly after, the eight new Versions collected here sometimes enhance the original recordings, and sometimes detract from them.

Rather than recruit from the classical world, the choice of Thirlwell for composer was presumably a kind of best-of-both-worlds deal. In his guise as Foetus, not only is Thirlwell a veteran of orchestral gothica, he also helped pioneer the extreme noise scene that ran parallel to punk in London’s avant circles – precisely the kind of poisonous shock-art freak scene Danilova idolises. Moreover, Thirlwell has, at some point or another, collaborated with most of New York’s no wave artists, including Lydia Lunch whose nihilistic, sexually violent and modernist strain of goth is Danilova’s very favourite kind, as opposed to the British post-punk strain.

Basically, hiring Thirlwell promised Danilova a slightly leftfield spin on orchestral scoring, courtesy of a back room man able to both ‘get’ and indulge Danilova’s radical pretences, but who, when required, could also get a bit John Williams. Which Thrilwell invariably does, with many of the tracks here decidedly cinematic treatments of songs that were already cinematic in the first place: a filmic quality native to all goth music, though especially so in the case of Danilova’s theatrical style.

Unfortunately, in the end Thirlwell plays it decidedly straight. Rather than put his own unique signature on the classical style, the crop of fairly conventional arrangements he submits here could be the work of any number of session composers. And in fact, you could describe his choices as obvious, or even a little stock. Whether or not an attempt to be faithful to the original recordings (which kind of defeats the purpose), his compositions are, while lyrical, touching and impressively accomplished, fairly middle of the road; especially compared to the usual outcome when artists from the unsavoury end of the avant garde do classical, be it The Knife’s ‘anti-ballet’, These New Puritans orchestral material, or indeed, Thirlwell’s own solo work.

Especially unimaginative is how frequently the classical instrumentation merely mimics the pop sounds they’re replacing, i.e, instead of the synths stabbing the rhythm out, it’ll be a cello. As such, there’s shades here of those piss-on-your-face-annoying panpipe albums, where some unbearable health food prick plays Radiohead songs entirely in bamboo. Danilova’s claim that the album works by “taking approximations from past records and turning them inside out” should be taken with a pinch of salt, because these songs are acoustic recitals, or rearrangements, much more than they are reinterpretations.

Not that there aren’t a few surprises here. For starters, classical music affords the songs a timeless feel, while the bumping cello parts on ‘Hikikomori’ and ‘Run Me Out’ reveal the debt that Danilova’s melodramatic inclinations owe to Kate Bush. What’s also apparent here is just how truly beautiful Danilova’s music is. It’s especially pretty when, slowed to a desperately sad sway, ‘Avalanche’ is made to swirl in on itself by cascading violins straight out of some Tsarist romantic epic, duly transforming the song into an ornate, porcelain-frail aria. But aside from anything, when stripped back the songs reaffirm just how utterly top-notch a pop melodist she is. Slap a couple of danceable beats on these songs and you’ve got the greatest Belinda Carlisle record you never heard.