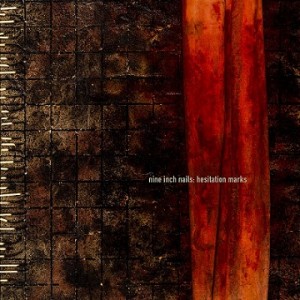 Like everything Trent Reznor has created as Nine Inch Nails, Hesitation Marks is a densely layered, ornately detailed set of seething, synth-heavy rock. He’s still able to mine personal existential crises for universal tales of angst, anger, and perseverance — even if he’s more likely to see silver linings than during his 90s heyday — yet as he approaches fifty years old and twenty five years as NIN, the underlying question that seems to gnaw at Reznor is “do you still have something important to say?”

At the midpoint of Hesitation Marks are two songs originally intended for a (contractually-obligated) greatest hits compilation, songs that accidentally sparked Reznor’s decision to end his NIN hiatus with a full album. The first, ‘Everything’, rewires the pretty hate machine for major-key pop-rock: even if the end result is more Strokes than Skinny Puppy, the distorted wall of sound keeps it grounded in the band’s milieu. The second is ‘Satellite’, a hip hop-inflected song with the anti-government and anti-surveillance themes of Year Zero that builds to a grooving climax. The pair are almost outliers here, but in their DNA are the keys to the rest of the album.

The pop leanings of ‘Everything’ are submerged and even more effective in ‘Various Methods of Escape’. After a noodling, radio signal intro, the song reveals one of Reznor’s catchiest chorus in ages and a bridge that contains some of his most mainstream rock songwriting ever. At points like this, having veterans Lindsey Buckingham, Adrian Belew, and Pino Palladino in the studio couldn’t have hurt. As for ‘Satellite’, the song’s drum machine danceability is a throughline on the album.

Always one to set the scene, ‘The Eater of Dreams’ opens Hesitation Marks with metronome bleeps and warm-up ambience, before the acidic synth of ‘Copy of A’ crashes into frame. The restrained, percussive song is decidedly dancey, holding off on its feedback-laden climax for as long as possible. Lyrically, Reznor is at his most self-aware: as he sings about copies, shadows, echoes, and of doing what he’s told, he confronts the fact that a long career is inevitably rife with repetition and that expectations (from all directions) can be paralyzing.

With that in mind, ‘Came Back Haunted’ is assembled, ransom-note style, from copies of past moments: the analogue gurgle and spooky ambience are beefier versions of Pretty Hate Machine standards; the body horror fascination with “something inside of me” is a frequent NIN refrain, and the stuttering, anthemic hook finds its roots in any of the band’s radio singles since 2005’s ‘The Hand That Feeds’. ‘I Would For You’ is another cut-and-paste jaunt: Reznor’s hushed, ‘Something I Can Never Have’-verses alternate with an arena-sized hook that sacrifices the message of ‘Hurt’ (“If I could start again / A million miles away / I would keep myself”) for one of devotion (“if I could be somebody else / I think I would for you”), a lyric that is difficult to not view this through the lens of Reznor’s marriage and entry into fatherhood.

The comparatively sparse ‘Find My Way’ also responds to the band’s earlier material. Reminiscent of the band’s quieter post-Fragile moments, the song builds slowly and deceptively over a clunky, drum machine beat. For his part, Reznor is more expressive than ever as a vocalist, often reaching for his falsetto, and his hushed pronouncement (“I have been to everyplace / I have been to everywhere / I’m just tryin’ to find my way”) recalls The Downward Spiral cut ‘I Do Not Want This’: “I want to know everything / I want to be everywhere / I want to fuck everyone in the world / I want to do something that matters.” One is a quarter life statement of purpose, the other a midlife realization.

Similarly, ‘While I’m Still Here’ couches an existential crisis (both personal and professional) in paranoid, apocalyptic fantasy, but it’s not subtle: “Only thing I’ve ever done / (Ticking time is running out) / Closest I’ve ever come (Ticking time is running out),” he sings, eventually sounding hopeful in his resignation: “I don’t mind, I’m okay / Wish it didn’t have to end this way.” After the last couplet, funky horns give way to the creeping fog, detuned keys, and percussive clatter of ‘Black Noise’, an instrumental track that closes the Hellraiser puzzle box that was opened with ‘The Eater of Dreams’.

Along the way, there are surprising moments: the muscular synth-funk of ‘All Time Low’, a song heavy with a junkie’s pleadings (“So give me just a little baby / Something to get by”) and laments (“This paranoia doesn’t fade”), closes with a scintillating Final Fantasy arpeggio. Elsewhere, the twitchy club beat on ‘Disappointed’ and the house-influenced one on ‘Running’ animate otherwise punchless songs. Even Reznor’s blasphemy has seemed to soften: “pray the lord my soul to take” (on ‘Find My Way’) and “God forgive me if I cry” (on ‘While I’m Still Here’) would be anathema on previous efforts.

Hesitation Marks follows the musical lineage that began with The Fragile, but it surpasses recent NIN albums thanks to a deeply personal thematic core and a willingness to push the songwriting into territory that is often dancier and poppier than listeners have come to expect from the band. Does Trent Reznor still have something to say? With Hesitation Marks, the answer is an emphatic “yes.”